13 UPCOMING TONY ISABELLA CAMEOS THAT WILL SHOCK YOU! 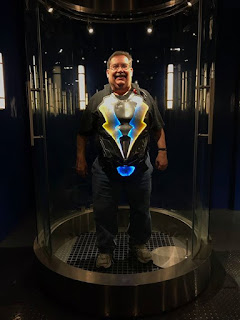 Ever since I posted the above photo of me wearing a Black Lightning vest during my visit to the Black Lightning set, fans have asked if I’ll be making a cameo appearance in the third season. Naturally, due to the hundreds of non-disclosure agreements I have signed in recent years, I can neither conform nor deny any of the rumors that have arisen in the wake of my silence.

However, I was recently contacted by a “journalist” who wanted to interview me for a story revealing a number of cameo appearances I might be making in the future. To be honest, I hate to see these appearances leaked because it will minimize the delightful surprise when viewers recognize me. On the other hand, I’m pretty sure that no one will believe this “journalist,” especially if he breaks this  story on my own blog.

I offered him $20 (American money) and a six-pack of warm beer for the exclusive rights to the story. After some dickering - I added a signed copy of Black Lightning: Cold Dead Hands, a signed photo of myself, a towel and a coupon for 30% off at Walmart - he agreed. Here is his report:

IS TONY ISABELLA THE NEW STAN LEE?
An exclusive scoop by Talbot Wacker

Comics fans have been wondering when Tony Isabella, the co-creator of Black Lightning, would be making a cameo on the show that stars the super-hero he created and sold to DC Comics in the 1970s. What they didn’t know until I, the best investigative reporter in all of comicdom, am right now revealing to them, is that Isabella’s career is about to explode in a new direction.

Podcasts, public service announcements and televised appearances on various news programs with Isabella have been circulating through the entertainment industry for months now. According to whoever is in charge of Warner Bros this week:

“Isabella has a presence that astonished us. We showed the videos to every one and they all concluded that he was a really nice guy who we all loved. We couldn’t pin down why we liked him.  We just did. Everybody wanted to use him in everything from our super-hero shows to our movies to orientation videos for whoever will have my job next week. We tried to sign him to an exclusive contract, but he called me Bullwinkle and said something hilarious about how that trick never works. I felt something deep in my lady parts and I’m not even a woman.”

While actual details are scarce to the point where some might think I, the best investigative reporter in all of comicdom, was pulling his information out of his ass, I can confirm that I am exclusively listing these thirteen upcoming appearances.
BLACK LIGHTNING:

Isabella plays Dr. Helga Jace’s estranged husband. She keeps him in a pod in Markovia.

Isabella plays Danson Queen, yet another half-sibling Oliver knew nothing about. He’s a terrible person who hits on Felicity, Dinah, Laurel and Thea. He’s accidentally shot in the crotch with an arrow when Oliver tries to teach him archery.

Isabella is a super-speedster from a future alternate world where he is wanted for going to all-you-can-eat buffets and cleaning them out in seconds.

Isabella plays a Time Bureau employee who wins the organization’s “Ugly Sweater” contest. The prize is a trip to meet the historical figure of his choosing.  Hilarity ensues.

Bizarro-Brainiac. He keeps shrinking himself and getting stuck in a variety of bottles. Expect lots of spit-takes as various members of the cast almost drink him.

Gets eaten by an crocodile.

Isabella plays a geriatric Scrapper from the Newsboy Legion talking about Suicide Slum in the 1940s.

Mazikeen tries Tinder. Swipes right when she meant to swipe left. Ends up dating character played by Isabella. He makes her laugh, so she sleeps with him. Walk of shame is epic.

In an as-yet-unsold pilot, Isabella plays a washed-up comics writer who discovers and reconnects with Beebo, his favorite toy from when he was a boy. With no other outlet for the writer’s creativity, his imagination flows into Beebo and brings the stuffed animal to life. Mystical hilarity and vengeance ensue.

******************************
Tony here. I’m now regretting spending that twenty bucks plus the cost of the signed copy of Black Lightning: Cold Dead Hands, the signed photo of myself and the towel. As for the coupon for 30% off at Walmart, it expires tomorrow. I doubt Wacker will clear customs in time to use it.

In other entertainment news, I saw Captain Marvel with my kids Eddie and Kelly. Tomorrow, I’ll bring you my review of the film. See you then.