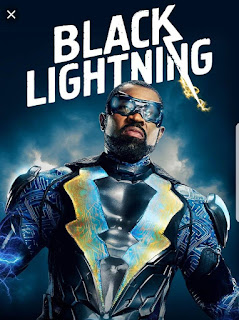 I’m back with another installment of “Black Lightning Beat”, albeit a shorter column than yesterday’s bloggy thing. At least that’s my plan as I start writing. Somethings these columns take on a life of their own.

I’ve spoken about Jefferson Pierce’s priorities in both the Black Lightning TV series and my recent Black Lightning: Cold Dead Hands. They are...family, students, community. Abandoning those to become Batman’s sidekick or Katana’s partner-in-demon-fighting is totally out of character for my creation. A couple of DC Comics executives agree with me on that, but it doesn’t stop other people at DC from ignoring the most basic truth about Jefferson.

Here’s something else you should understand. Jefferson’s one true love is Lynn Stewart. There can be no other. Believe me, I tried to give him a new romantic interest in my 1995 comics series. It never rang true and, as soon as Lynn showed up during my run, it was all over for the other romantic interest. I wrote her out of the series in my unpublished script for Black Lightning #9.

I’m told the Black Lightning TV series planned or even filmed some sort of make-out scene between Jefferson and Kara Fowdy, played by the exquisite Skye P. Marshall. I’m guessing they realized it just wasn’t right for Jefferson. In short, I will always be a Jeff-Lynn shipper. Because it feels right and rings true. 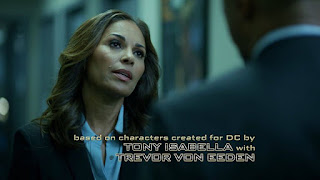 Just this weekend, I was interviewed at considerable length about  Black Lightning, my life and my career by my dear pal Alex Simmons, himself an amazing writer and so much more. The first time my voice didn’t come through. So we had to do it again. It’s an exceedingly long conversation, which I fear I dominated, and you can listen to it by going here:

About the only thing I regret about the interview is that I tossed a cheap insult at a comics gossip website. I could make the excuse that I was very tired, which I was, but I still should have been a lot more temperate. My feelings about this website are well known, but I should have embraced my better angels.

I called the website to task for refusing to use the official and correct credit line for Black Lightning:
Created by Tony Isabella with Trevor von Eeden.

One of the things I know about the comics industry is that credits are not always accurate. A while back, it became more or less the custom to declare both the original writer of a character and the original artist as co-creators. That’s not always accurate. There are occasions where an editor played a key role in the creation of a character. There are occasions where someone who did not draw the first story introducing a character designed the character. I have a tendency to suspect corporate-mandated credits, especially if I know the complete facts of creation. In the case of Black Lightning, no one knows them better than me.

Everything about Black Lightning/Jefferson Pierce was created by me before I pitched the character to DC. That’s why, for the first two or three years of the character’s existence I was credited as the sole creator. I still feel that’s the most accurate title for what I did.

Trevor von Eeden was primary designer of the first Black Lightning costume, the one I sometimes refer to as “Disco Lightning.” He was not the only designer. I asked for the lightning piping and what I called Captain America boots. Bob Rozakis came up with the insanely clever for its time Afro-mask. Joe Orlando opened up the shirt on account of he wanted to see more skin.

But Black Lightning is not defined by that costume. He had has four or five costumes since. I’ve written him with three costumes. When I write him, he’s the same guy no matter what costume he’s wearing.

My friend Trevor was named co-creator of Black Lightning after I’d approached DC Comics about buying my creation back from them. He’s told me of being stopped in the DC halls and being told he was now a co-creator. He’s also told me he doesn’t consider himself to be the co-creator of Black Lightning, though, sometimes, he has said otherwise. Though never to me. I choose to take him at his face-to-face word.

But, even if Trevor did consider himself a co-creator, it doesn’t change the fact of Black Lightning’s creation. The fact being I am the creator of the character.

The current official credit line was written by me. The ambiguous “with” was intended on my part to insure that Trevor was recognized for drawing the original series and all the hard work that entailed on his part. He was a young kid who was thrown into the deep end of the pool and, man, did he swim. I’ve tried to do what I could for him - whether he asked me to or not - because of that hard work. I will continue to do so.

When I did my 1995 series, I told DC I wanted Trevor as the artist. They told me he wasn’t available. That turned out to be a lie, but it was far from the first DC Comics lie.

When I did my most recent series, I told DC I wanted Trevor for the artist. They told me no one would work with him. They wouldn’t even assign him a variant cover. I’m not going to get into the bad blood between DC and Trevor. I kept asking if he could do a cover. I was told to stop sticking my neck out for him.

Mercurial artist that he is, Trevor doesn’t always make it easy on those who admire his talent and like him. If I were in control of Black Lightning’s comic-book fate, he and I would be working on a Black Lightning project right this minute. I’m not.

I am pleased I got to work with Eddy Newell and Clayton Henry on my subsequent Black Lightning series. I would love to work with them again. But I’d also like to work with Trevor again.

Those are the facts. You can choose to believe otherwise. But you would be wrong. Says the guy who knows. 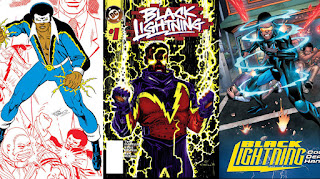 In another case of Tony just going on and on, Jermaine McLaughlin interviews me for SYFYWIRE. You can read his article here: 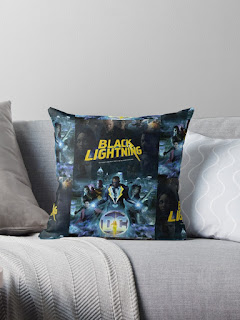 Looking for Black Lightning swag? There’s not nearly as much of it out there as there should be, but here’s a wonderful selection from REDBUBBLE:

Yesterday, I said I would tell you about ways you can contribute to “Black Lightning Beat”. There are a lot of them.

If you have convention or other photos of yourself with the great Black Lightning cast, e-mail them to me with information of who’s in the photo and where they were taken. If you want to tell me all about your encounter with these cast members, I’d love that a lot. Just make sure that what you tell me is something you’re okay with my sharing in these blogs.

If you come across Black Lightning swag, tell me about it. While I do get royalties from DC Comics for this stuff, the statements do not often list what the items are. At best, they list the name of whoever is making the items. Since I want to amass as complete a collection of Black Lightning stuff as possible - I plan to donate my Black Lightning materials to a worthy university when I have no further use of them (on account of I’d be dead) - I appreciate you telling me about this stuff.

If you’re an artist, send me scans of your Black Lightning artwork. I’ll include it in a future “Black Lightning Beat” with information on how prospective clients can contact you.

Finally, if you work for a CW station and you have Black Lightning swag you give out, especially shirts, please contact me. I’ll try you comics or other items for that stuff.

That’s it for this installment of “Black Lightning Beat”. I’ll be back tomorrow with a brief message before I leave for New York City to attend the Big Apple Comic Con. See you then.