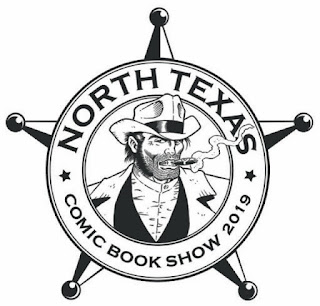 I heard the command “Go west, young man”, so Friday, February 1 saw me board American Airlines Flight 2331 for Dallas/Fort Worth and the North Texas Comic Book Show. The flight was pleasant, save for a flight attendant I’ll tell you about in a bit. I had a great seat (8B) with no one in front of me and no one next to me. So I had no one leaning their seat back into my space and, since my briefcase could go under the seat next to me, plenty of leg room for myself.

Added bonus. The flight was crowded enough for the counter agent to ask for volunteers to have their carry-on bags checked through to our final destination without charge. Since my carry-on was filled with books, I was happy to volunteer. Checking it through earlier would have cost me $40.

When the attendant tried to block other passengers who were nearer to the first class restroom than the ones in the back of the plane, they brushed past him. His obvious distress amused me.

When I arrived at the airport, convention promoter Chris Latshaw met me at the baggage claim. He drove me to the Dallas Marriott Las Colinas. The hotel seemed to have been recently renovated and had a very modern feel to it. My room was great and the hotel’s Bistro Fiera restaurant was excellent. I had the same waitress every time I ate there and, by the end of my stay, I gave her copies of some of my books.

The only drawback? A Christian women’s group gathering had filled most of the Las Colinas. Relax. This isn’t some anti-religion rant. My problem was that none of them had inside voices. You could sit the entire restaurant away from them and still couldn’t hear your phone for their volume. If they passed within a floor of my room, I could hear them. It was like sitting next to a deaf relative who
shouts because they think YOU can’t hear them. I’m sure they were very nice people, but the convention was quieter.

I spent a pleasant evening reading Marie Kondo’s The Life-Changing Manga of Tidying Up: A Magical Story, enjoying a delicious piece of cheesecake and watching Bones reruns. With a good night’s sleep, I  was ready for the Saturday morning start of the event.

The North Texas Comic Book Show prides itself on “putting comics back into comic cons.” There were so many guests from the 1970s and 1980s that it felt like a high school reunion to me, except a whole lot cooler than the high school reunions I never attend.

There was a terrific Tony Isabella banner hanging behind my table. To my right was legendary Superman writer Elliott S! Maggin. To my left was artist Aaron Lopresti, who drew the Star Trek: All of Me graphic album I wrote with Bob Ingersoll. Across the aisle from me were my dear friends Bill and Linda (Lessmann) Reinhold. Linda and I had some great moments reminiscing about the folks we worked with in the Marvel Bullpen at the start of our careers.

During the course of the convention, I also chatted with Mike Zeck, Bob McLeod, Larry Hama, Joe and Hilary Staton, Keith Pollard, Larry Hama, Al Milgrom, Denys Cowan, Larry Stroman and, of course, Neal Adams. As I can’t say often enough, many of the benefits creators receive today are because Neal fought the battles decades ago. He’s a good man and a good friend. I’ve learned a lot from him over the years and I’m still learning from him.

A young man named Fabian was my assistant for the show. Because of him, I was able to spend more time answering questions and signing comics for the fans. I can multi-task if I have to, but it sure is easier to have someone backing me up. 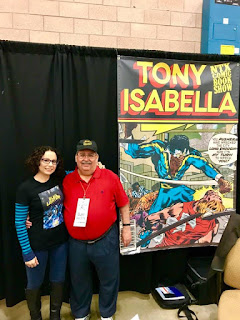 Among the fans who came to my table were the delightful Veronica Bigio Maupin from the Black Lightning!!! Discussing the TV Show group on Facebook. She came with her supportive and terrific hubby and kids. It was great meeting them. I also did a video shout-out to that group, but neglected to write down the name of the member who filmed and sent it. I’ll try to correct that omission before we get to the end of tomorrow’s bloggy thing. What? You thought I could cover this magnificent two-day event in just one column? 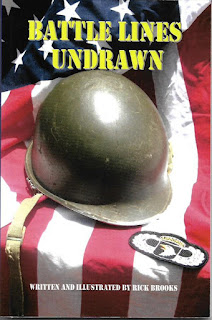 Rick Brooks, whose been reading my columns and comics for decades, was also at the con. He gave me a copy of his Battle Lines Undrawn prose novel [Mirror Publishing; $10.99]. Aimed at readers ten to eighteen, this amazing story chronicles a young man’s enlisting to fight our country’s enemies overseas and finding an equally serious threat within our borders. I liked it a lot. 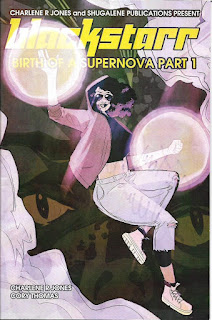 Charlene R. Jones gave me Blackstarr: Birth of a Supernova Part 1. A full-color comic drawn by Cory Thomas, it introduces a new hero and showcases her budding talent as a comics writer. It’s the first project to be launched under her Shugalene Publications company. I don’t have ordering information on the issue, but you can contact Jones via her website. 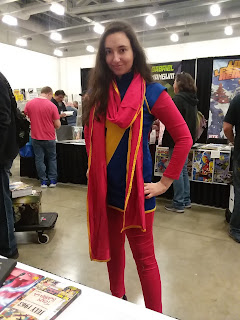 Hannah Cortez, cosplaying as Ms. Marvel, one of my favorite heroes, graciously posed for a photo for the blog. She’d return on Sunday as a different character.

The panel programming took place in the back of the hall bleacher section. Moises Chiullan moderated a Tony Isabella spotlight panel that was a retrospective look at my 46-year comics career. I don’t remember specifics, but I do remember the panel was well received by the fans who attended. Not for the first time, I wished someone would record these panels for online presentation.

I had a good day at my table with signatures accounting for 60% of the money I made. I was slow to start charging for my signature - I didn’t start until 2018 - but now I can’t imagine not charging. I know it’s an expense for the fans, but, for me, it’s is often the difference between whether or not I can afford to attend a convention or other event. As always, I didn’t charge to sign any items purchased from me.

After the Saturday festivities, I was driven back to the hotel with writer Amy Chu, whose fine work can be seen in Poison Ivy: Cycle of Life and Death and various KISS and Red Sonja series. We chatted about writers being asked to do sketches - she’s better at it than I am - and I quickly did one of my silly Godzilla sketches for her son Adrian.

I’ve seen one of these Godzilla sketches listed on eBay for almost $400. Thankfully, no one bid on it. How much would you pay for one of my sketches? I’m actually considering adding created-on-the-spot Godzilla sketches at future conventions. With a new gag for each sketch. Pretty sure I can undercut that $400 price significantly.

That’s all for today. Come back tomorrow for the second and final part of my North Texas Comic Book Show report.

Posted by Tony Isabella at 2:05 PM