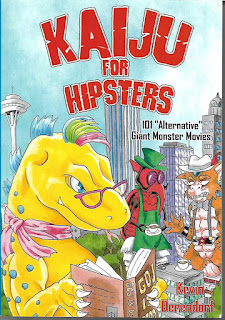 I’m back from the Big Apple Comic Con in New York. Saintly Wife Barb and I had a wonderful time, but it’ll be a while before I get to the full report on that event and our time in the city. Today, as I start sorting my notes for a marathon of convention reports - North Texas, Pensacon and the afore-mentioned Big Apple - I want to talk about some recent books I’ve enjoyed.

Kaiju for Hipsters: 101 "Alternative" Giant Monster Movies by Kevin Derendorf [independently published; $19.99] is one of those great books best read a few chapters at a time. Eschewing writing about well-known stars like Godzilla, Gamera and Mothra, Derendorf goes to the edges of the genre to talk about unsung gems and even some creature features perhaps best left unsung.

Several included films are compilations of episodes of Japanese TV series. Others are low-budget original productions. More than a few are parodies. Some are even non-studio works produced by filmmakers just starting out or just having fun. The variety within the genre will astonish many readers.

Gorgo, a favorite of mine, is written about early in this 418-page tome. For every film I’ve seen, such as Yongary, Monster from the Deep or Monster X Strikes Back: Attack the G8 Summit, there are a dozen movies I’ve never heard of. I plan on seeing some of those in the future. I’ve already watched Legend of Dinosaurs and Monster Birds, albeit on YouTube. I bought the novelization of Gargantua in the hope it’s better than the made-for-American-TV movie I saw so long ago.

Derendorf’s 101 movie reviews...with an occasional bonus film...are  fun and informative. There are additional chapters for honorable mentions, more Ultraman movies, recommended documentaries, X-rated kaiju movies and even Godzilla and Gamera movies for hipsters. I’m in love with this book and recommend it to all of you. 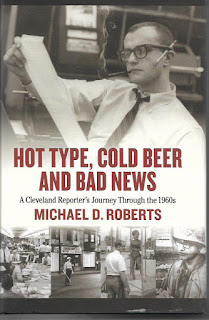 Michael D. Roberts’ Hot Type, Cold Beer and Bad News: A Cleveland Reporter’s Journey Through the 1960s [Gray & Company; $24.95] was one of last month’s things that make me happy. I wrote:

“A great book about a less-than-great newspaper. I worked at The Plain Dealer for about three years and this book brought back some memories.”

Roberts was at The Plain Dealer when I worked them and I remember him as one of the better people up there. The paper didn’t lack for arrogant pricks, incompetent jerks and worse. When I say worse, I’m thinking of the man who hired me to be a copy assistant and who was later convicted of real serious crimes, including the murder of an elderly woman. Fun place to work. If you believe newspapers should be the tools of the rich and the powerful.

But Roberts was one of the good guys. He always seemed like a class act and, in this autobiography, I learned of the wide and wide-ranging experience that shaped him. The guy reported from Vietnam, the Middle East, Kent State, the Cleveland riots, to name the war zones he covered. It’s an exciting, fascinating unvarnished look at the life of a good reporter. I think anyone interested in what good journalism used to be and can/should be again will enjoy the book.

My only quibble: Roberts repeats the “urban legend” that Superman was based on a classmate of Jerry Siegel and Joe Shuster, a man who had a long career as a Plain Dealer big shot. Sometimes I think everyone who knew Siegel and Shuster in school would later claim they were this or that Superman character. And, with the exception of Joanne Siegel, they were all lying.

Don’t let that quibble stop you from checking out this swell book. It’s the real deal. 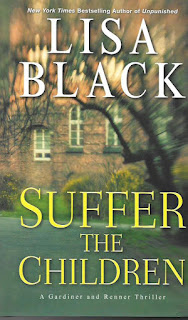 Suffer the Children by Lisa Black [Kensington; $26] is the fourth book in the authors Gardiner and Renner series. Maggie Gardiner is a forensics scientist for the Cleveland Police Department. Veteran bloggy thing readers know I have a special fondness for mysteries set in my home state of Ohio. Jack Renner is a homicide detective for the CPD. Gardner knows something about Renner that no one else knows; he’s a serial killer who murders in the name of “justice.” He kills killers who have escaped or who are sure to escape paying for their crimes. Circumstances force Gardiner to keep the secret, but she feels responsible for Renner’s past Cleveland crimes and is always fearful that he will commit more.

This book around, the uneasy pair are investigating the death of a teenage girl found dead at the bottom of a stairwell at a facility for juvenile offenders. Did 15-year-old Rachel Donahue take her own life or perish by misadventure...or was she murdered? When another resident dies...

Black tells a thrilling story, though the novel gets bogged down a  bit when various doctors and other employees “educate” the cops and the readers about the serious problems faced by these children and those who try to help them. Black’s heart is in the right place - you can feel her passion for the subject - but these mini-lectures do slow down the book.

I’m still recommending this novel. A twist in the overall story of Gardiner and Renner has me eager for the next book. Black’s other novels are also worth checking out.

That wraps up today’s bloggy thing. I’ll be back on the morrow with my report on the North Texas Comic Book Show. See you then.

Posted by Tony Isabella at 7:32 AM