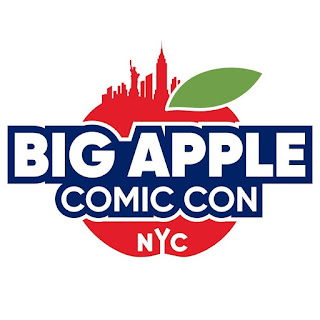 New York, New York! My next convention appearance is the Big Apple Comic Con, which takes place on Saturday and Sunday, March 9-10, at The Penn Plaza Pavilion, Pennsylvania Hotel, 401 7th Avenue in New York City. Show hours are 10 am to 7 pm on Saturday, 10 am to 6 pm on Sunday with early admission available.

You can buy early admission tickets for $75 per day. This gets you into the show an hour early and includes special deals and special gifts. I’m going to do my best to be behind my table for the early birds, but you’ll have to bring your own worms.

I’ll be appearing at the convention both days, joined by my Saintly Wife Barb. When I’m not doing panels or trying to say hi to my old friends or bugging the Godzilla, King of the Monsters guests about that upcoming movie, I’ll be at my table selling Isabella-related stuff and signing autographs.

I’m doing two panels on Saturday, both of them in the Globetrotter Room. I think that means you have to sink a three-point shot before I answer your questions.

At 11:45 am, I will be moderating and appearing on “From The Bronze Age to TV” with my dear friend Arvell Jones. Arvell and I created Misty Knight in an issue of Iron Fist, though Chris Claremont did the heavy lifting on developing the character in later issues. We will be talking about our other Bronze Age work and discussing our love for Simone Messick, who plays our daughter Misty on Luke Cage, the Defenders and Iron Fist.

I’ll also be discussing Black Lightning, now the star of a hit TV show going into its third season; Black Goliath/Bill Foster (from Ant-Man and the Wasp); Tigra, who will be starring with Dazzler in a new animated series on Hulu; and maybe even the Elementals from Spider-Man: Far From Home, who may or may not be the same villains I created while writing the Living Mummy. I’ll try to get an answer  on that before the panel. Following this panel, there will be a photo opportunity with Mike Colter, Arvell and myself.

At 12:40 pm, also in the Globetrotter Room, I’ll be moderating the “Mike Colter: Sweet Christmas in March” Q&A session with the star of Luke Cage and the currently in post production Evil. According to the Internet Movie Database:

A skeptical female clinical psychologist joins a priest-in-training and a blue-collar contractor as they investigate supposed miracles, demonic possession, and other extraordinary occurrences to see if there's a scientific explanation or if something truly supernatural is at work.

As moderator, I’ll be facilitating the audience asking questions of the talented Colter. But, in case you get all shy on us, I’ll have questions about both Luke Cage and Evil for Mike.

Because I’m flying to New York, I’m limited in what I can bring to sell. The Isabella items will likely include Black Lightning: Cold Dead Hands, Black Lightning Volume One (reprinting my original run from 1977-1978), July 1963: A Pivotal Month in the Comic-Book Life of Tony Isabella and an assortment of posters and prints. While I do charge for my signature, I think my prices are very reasonable:

If you’re cosplaying at Big Apple, especially if you’re cosplaying as a character I created or wrote, please stop by my table so I can get a photo with you for my blog, my Facebook page, my Twitter feed and just to show my family and friends the cool people I hang out with at conventions.

If you want to interview me at Big Apple, I’ll do my level best to accommodate you.

One more thing. I will be flying in to New York on Wednesday, three days before the Big Apple convention. This is to give me the chance to have meals with old friends I don’t see often enough. Depending on my schedule, this might also allow me to get together with some of my Facebook fans and friends.

For interviews or meetings, you will need to e-mail me as soon as possible. I don’t go online while I’m traveling, so I’ll need your contact information before I leave.

I enjoy visiting New York, the place where I started my long comics career. I’m especially looking forward to the Big Apple Comic Con. I hope to see you there.

Posted by Tony Isabella at 6:00 AM