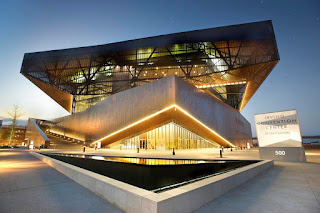 The North Texas Comic Book Show (Saturday and Sunday, February 2-3) was held at the Irving Convention Center at Las Colinas. From the outside, the building looks like something you’d see in a Star Trek movie. Inside, its nearly 100,000 square feet make for a facility that can easily hold a major comics event and more.

The convention area was huge. It held over three dozen guests from the world of comics plus dozens of vendors. The aisles between the rows of tables were wide and easy to navigate.

There was plenty of room in my booth and, as a added convenience, the convention took an incredibly comfortable chair from one of the venue’s offices for me. I don’t think my back has ever felt as good after a convention as it did after this one. Other conventions will be hard-pressed to provide me better seating. Which doesn’t mean they shouldn’t try. Hint, hint.

The show provided sandwiches, drinks and snacks during the convention, so I never sampled the concession stand fare. However, from walking by the stand, it seemed like a clean, efficient and tasty operation.

The center’s restrooms were likewise clean and efficient. Yeah, I know most convention reports don’t talk about restrooms, but some of my readers are almost as old as I am. You know what I mean.

I got to the center a little before the start of the convention. As Amy Chu had liked the cheesy Godzilla sketch I did for her son, I did one for her as well. Here it is: 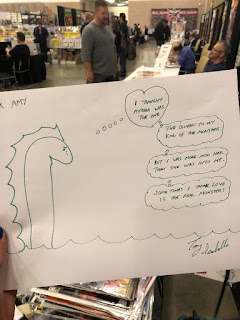 I signed a lot of comics on Sunday, including some late 1960s X-Men issues that contained letters written by me and published in those issues. I’m starting to get more of these. If I can ever get good copies of all of the 50+ letters I had published as a fan, I might collect them in a book. Any equally demented collectors out there want to assist me in this effort?

Everybody has a podcast these days. I didn’t keep track of all the ones I did that weekend, but two stand out. The first was with my friend Elliot S! Maggin, one of the premiere DC Comics writers of the 1960s through the 1980s. I wish the company would put together a volume of his best stories. I’d sure buy it.

The other podcast I remember was with my pal Chandler Rice, who put on the Las Vegas convention I attended last November, who has a huge comics business and who represents a number of great comics writers and artists. We had some technical difficulties and had to tape the podcast twice, but we got it done.

My Sunday panel was “Diverse Characters in Comics" with Amy Chu and Denys Cowan. Again hosted by Moises Chiullan, it was a conversation we need to have whenever comics fans gather at a convention. Lots of great comments from Amy and Denys. Me? I got a pretty good laugh when I spoke of how hard it was to find white male role models in comics when I was growing up. 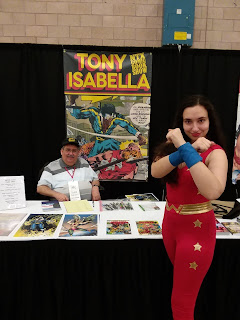 Cosplayer Hannah Cortez was back as Wonder Girl. Of course, I had someone take a photo of her in front of my booth. 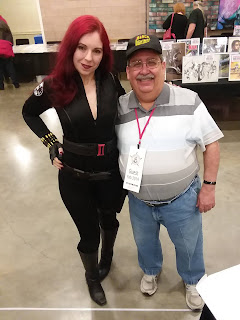 I also took some photos of the Black Widow recruiting me to sign up with the Avengers. That’s British Pixie, a professional cosplayer, model and costume builder who was born in Manchester UK and is now based in Houston TX. She does great work and you can see more of it on her Facebook page or her Instagram page. 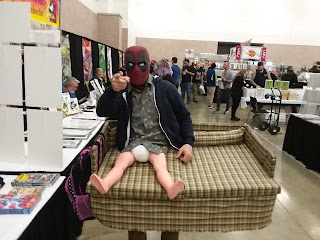 No disrespect to the ladies, but my favorite cosplay of the weekend was far and away Josh Lee’s “Deadpool on the couch.” If you’ve seen Deadpool 2, you know what scene Lee is recreating. He designed his brilliant costume so he could kneel and have the couch level with the floor. Several fans posed for photos of themselves sitting next to Deadpool. It was unforgettable cosplay.

Former retailer and DC Comics executive Bob Wayne paid a surprise visit to the convention. Bob did me a number of good turns while he was at DC, even after I was unceremoniously bounced from my second Black Lightning series in 1995. He’s a good people and it was nice to see him looking so happy and healthy.

Near the end of the show, I had a nice chat with Neal Adams, one of the people I admire most in the comics industry. We talked about a bunch of stuff, including his past and continuing efforts to make things better for comics creators. I usually see him at a bunch of conventions during the course of a year and always try to at least take a few moments to thank him for all he’s done for me and other comics creators. Nothing but respect for the man and his work.

At the end of the convention, I walked back to my hotel with Larry Hama. He’s another guy it seems like I’ve known forever. We talked about mutual friends and nutty situations in comics. I’m blessed to know and be friends with so many talented creators.

I was too tired to go out that evening, so I ordered pizza from the  hotel restaurant. The women who delivered it to my room was happy to see I was watching The Intern and not the Super Bowl. The only reason to watch the latter would have been if I were sure the New England Patriots would be crushed. Maybe next year.

I had a decent night’s sleep, interrupted only when a “ghost cat” crawled on to the bed and laid down against my leg. It was exactly what my cat Simba (back in Medina) does to me many nights. Okay, I was probably dreaming, but, dream or ghost, it woke me up.

My flight home was uneventful, which isn’t a bad thing for a flight to be. I’ve had some pleasant encounters on airplanes - You will be amazed by one I had flying back from Pensacon. - but uneventful is fine by me.

My overall impression of the North Texas Comic Book Show is that it’s a terrific event for fans of 1970s and 1980s creators. It’s a well-run show that treats both fans and pros well. If my schedule permits, I’d certainly consider a return visit.

I have two more con reports - Pensacon and the Big Apple Comic Con  - in various stages of completion. I’ll probably run a couple other things in between them.

My next convention appearance will be the Great Philadelphia Comic Con, April 12-14, at the Greater Philadelphia Expo Center in Oaks, Pennsylvania. I’ll have more to say about that event in early April.  For now...it looks like a wonderful convention.

On April 27, I’ll be giving a talk and workshop for the Cleveland Public Library. Watch this space for more details.

April is also when I start getting ready for this year’s legendary Tony Isabella Garage Sales. I’ve been buying copies of 1000 Comic Book You Must Read on the secondary market, so I’ll be adding those to my offerings. Sainted Wife Barb wants this year’s garage sales to be the best ever, mostly so she can reclaim parts of our house from the Vast Accumulation of Stuff and maybe reduce our existing storage units from two to one or even none. Exciting times.

Thanks for stopping by the bloggy today. I’ll be back tomorrow with more stuff.

Posted by Tony Isabella at 7:03 PM