BARB AND TONY GO TO THE FAIR 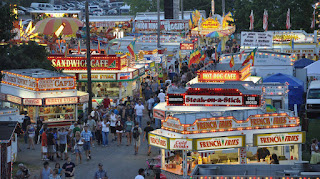 The Medina County Fair is wrapping up this weekend. I’m hoping most of the folks attending had a good time and that most of the vendors made a nice profit. I say “most” because I wish nothing but plague and pain on some of the deplorable attendees and vendors.

Barb and I went to the fairgrounds Tuesday night. I hadn’t visited  since 2015 and, as encapsulated in this letter I published in the Medina Gazette, here’s why...

My wife and I went to the Medina County Fair Wednesday night. We had a mostly nice time. The fair is terrific, a great place to eat delicious food that's no darn good for you and to run into friends you don't see often enough. However, I was dismayed at how many people I saw displaying, selling or wearing the Confederate flag. I wondered if these folks had always been racists and traitors to our nation...or if they came to those terrible ideologies later in life. Because if they claim that flag stands for anything else, they are being willfully ignorant of history.

Since then, there have been attempts to get the people running the fair to outright ban the display and sales of racist items. And, if you don’t think the Confederate flag is racist, kindly die. Right now. I’ve lost patience with you.

The people running the fair are cowards. The local politicians are cowards. While racists do have the constitutional right to fly the Confederate flag on their own property, there is no reason to allow it at events like the county fair. The best the cowards who run the fair were willing to do is to ask the racists to pretty please with sugar on top not display or sell racism images. It was reported the vendors had agreed to this.

Big surprise. At least one 2022 vendor did openly display and sell this symbol of racism and white supremacy.

Barb and I had been hopeful this wouldn’t be the case. We drove to the fair in our current rental vehicle - my beloved Hyundai Santa Fe is still at the dealer for repair - and planned to look around and have dinner there. We were pleasantly surprised to learn that seniors got in for free. There are some small perks to being old as fuck. I’ll take what I can get.

As one attending a county fair would expect, there were exhibits of livestock, 4-H displays, lots of food and snack trucks, vendors of t-shirts and other items and even a nice little restaurant set up by a Methodist church in the area. That’s where Barb and I had our dinner after our first pass through the fairgrounds.

Let me give props to the church. They served good food at excellent prices. Our meals and drinks came to less than $25. The volunteer staff was friendly and as efficient as we could reasonable expect, given that they weren’t professional and, in many cases, were kids. The couple sitting near us complained constantly and loudly, but that’s what self-entitled white people do. Naturally, one of them was wearing a shirt for a Republican candidate.

Republicans. If only there was some vaccine that could cure their bigotry and ignorance.

If I were the type of person who could ignore such deplorables, I’m sure I would have enjoyed the fair much more. But I can’t ignore a shirt like this: 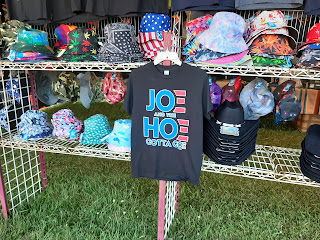 How is this acceptable? How could the fair managers not order the vendor to take it down? Because they are moral cowards.

There were other flags and shirts I found unacceptable. There were many “I love guns more than people” images, which is disturbing to me because being murdered by a right-wing zealot engaging in what some evil people call “legitimate political discourse” is among the top three ways I expect to die. The other two are a new strain of Covid and World War III.

There were also many Trump flags which, by their very nature, are racists symbols. Particularly disturbing was the high school punk wearing a Trump flag as a cape. You’re not a super-hero, youngster. You’re a disgrace. There was a time when I believed our young would save us from hateful old white men. It’s difficult to me to hold on to that dream in these insane circumstances.

In a large building, The Medina County Republican Party had a booth  across from the Democratic Party. When I walked by the GOP booth, a lovely young woman smiled at me. I frowned at her. I wanted to ask her if, when she was a little girl, her dream was to grow up to be part of a criminal terrorist organization.

I turned to stand in front of the Democratic Party booth. I thanked them for their efforts to save democracy. I told them I could not conceive of ever voting for Republicans. I said this quite loudly. I glanced back at the GOP girl. She wasn’t smiling. But I like to think it was more the realization of what she was supporting.

Finally, there was one incredible good stroke of luck at the county fair. The county treasurer had a booth where they would help folks find unclaimed funds due them. The treasurer is, I believe, a Republican, but he has always been  non-partisan in how he conducts the business of his office. I will never vote for him or for any Republican, but I appreciate the good he does.

In this case, his booth helped my wife find a considerable sum of unclaimed money for a family member. The amount was over ten grand.

The booth gave us everything needed to claim this money. This was our most profitable encounter at the fair.

This year’s fair was a shadow of its former self. Lots of reasons. The pandemic. Supply shortages. The chaos fueled by Trump and his followers. I briefly considered returning on Wednesday for a nice breakfast, but decided one visit was enough.

Will I ever return to the Medina County Fair? Unless the people who run the fair grow a spine and embrace basic morality, I don’t think so. That’s on them.

Posted by Tony Isabella at 5:05 PM