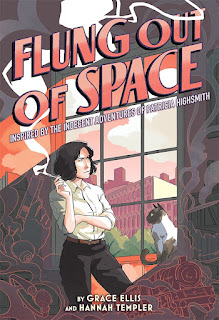 Last month’s bloggy reviewing “queer comics” was well-received, so it’s time for a sequel. The Republican Party has been working hard to demonize the LGBTQ+ community because it seeks the votes of the bigoted and the insanely religious. Their game plan is to diminish the equal rights protections of the community and deny them their just place in our American commerce and society. It has become more important than ever for all of us to support the community against such cynical hatred.

Any comics, graphic novels or manga that feature LGBTQ+ characters or themes are eligible for me to cover in this recurring series of reviews. There are a lot of them. Some are heartbreakingly serious, some are humorous, some are autobiographical/biographical. We will start today with one of the most fascinating comics writers in the history of comics.

Flung Out of Space: Inspired by the Indecent Adventures of Patricia Highsmith by Grace Ellis and Hannah Templer [Abrams Comics Arts; $24.99] is a graphic novel “imagining” of a portion of Highsmith’s life and career. Though I have never read Highsmith’s novels, which I hope to correct, this author of Strangers on a Train and other mystery/suspense captured my interest when I read The Talented Miss Highsmith: The Secret Life and Serious Art of Patricia Highsmith by Joan Schenkar.

Highsmith was an unpleasant person, which Ellis and Templer never shy away from. She wrote comics for ACG and also, recruited by Stan Lee, for Timely Comics. She was a lesbian, but, at least for some long time, uncomfortable about that. She did therapy and struggled financially until she earned some success with her novels. I don’t know if we would have gotten along - I’ve been befriended by quite a few unlikely people - but I would’ve liked to have met her. She would have horribly bored by my questions about her comics work, of course, but that’s an area of comics history which deserves to be examined.

Ellis and Templer have created an award-deserving graphic novel in this work. As noted, they don’t sugar-coat Highsmith’s unpleasant nature, but they also make it clear that she was often tormented by her sexual preference and initial lack of success in writing non-comics novels. I recommend Flung Out of Space to queer and straight comics devotees, as well as high school and public libraries.

One more thing. This graphic novel needs to be adapted into a movie or series. It’s engaging and powerful. 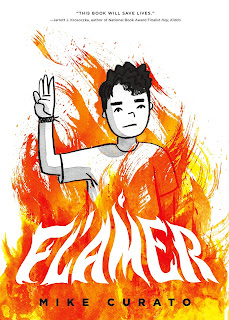 Next up is Flamer by Mike Curato [Henry Holt and Co.; $25.99]. This hefty graphic novel about a young boy whose summer camp experience is one of discovery and acceptance. Aiden Navarro is a thoughtful kid navigating friendships, cruel bullies and a growing attraction to another boy. Is he conflicted? You bet.

“I know I’m not gay. Gay boys like other boys. I hate boys. They’re mean, and scary, and they’re always destroying something or saying something dumb or both. I hate that word. Gay. It makes me feel...unsafe.”

Aiden’s introspections and trials are sometimes amusing, but more often intensely self-destructive. He gets perilously close to the point of no return. Yet, at the end, he is rescued by good people around him. It’s a happy ending, which is perhaps more happy than it logically should have been.

I wish all gay kids found the acceptance and compassion which Aiden finds. Unfortunately, that’s not the world we live in. Gay kids in America have been targeted by so-called Christians and the vilest members of the already vile beyond belief Republican Party. These children are under siege by those who would utterly erase them from our society. I’m a big believer in hope and the ultimate victory of good, but belief must be balanced by reality. Though he has found supportive friends, Aiden is absolutely right to feel unsafe. He is unsafe and it’s up to us to keep him and others like him safe as he
navigate the hard voyage to the right side of history.

SIDEBAR. A reader has asked me why I include ISBNs with my reviews of books. It’s because a librarian ask me to do, telling me that’s what they use to order books. I’m more than happy to help them get these books for their patrons. 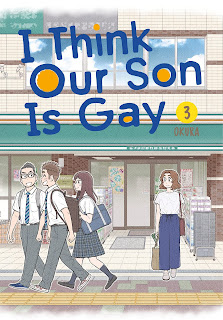 Okura’s I Think Our Son is Gay 3 [Square Enix Manga; $12.99] is the latest book in the series about Hiroko and his mom Tomoko. Despite the implied uncertainty of the series title, it’s clear to those of us getting all sides of the picture that, yes, Hiroko, is gay and crushing big time on a male friend. Tomoko and her younger son Yuri don’t seem to have any doubts. Hiroko’s father, who isn’t around as much, is hoping that’s not the case, as is a young girl who appears to be crushing on the young man. Whew!

Despite the above, this isn’t a soap opera. It’s a comedy drawing its humor from the nigh-universal awkwardness radiating off almost every character, save for Hiroko’s crush. The chapters are short, but pleasant. My only problem is the humor is wearing thin. There is no emotional growth and so it’s pretty much the same jokes over and over again. Time to move things forward and find some laughs in new situations. 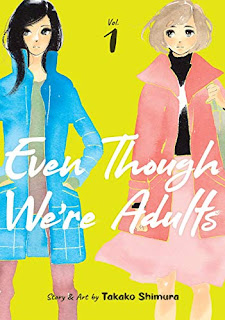 I’ve read the first three volumes of the manga series Even Though We're Adults by Takako Shimura [Seven Seas Entertainment; $12.99per volume] and I’m on the fence, leaning toward getting off the fence. Here’s the first volume blurb:

From the critically acclaimed creator of Wandering Son and Sweet Blue Flowers, a heart-tugging manga about two busy women who think they've figured out the whole adulting thing...until they fall in love with each other. Ayano, an elementary school teacher in her thirties, stops by a bar one day and meets another woman named Akari. Sparks fly as the two chat, and before the night is over, Ayano even goes in for a kiss. Akari is intrigued but confused, especially when she discovers that Ayano has a husband! Both Ayano and Akari are about to find out that love doesn’t get any easier, even as you grow older.

Akari is a sympathetic character. To avoid interfering in Ayano’s marriage, she goes back to her old job as a hairdresser and moves to a new neighborhood. Unfortunately, she finds herself living near Ayano and her husband Wataru. Hubby is not thrilled to learn Ayano is attracted to another woman, but tries hard to be understanding. He’s a good guy.

Ayano is the problematic character in this manga. Maybe I’m reading her wrong, but I think she wants what she wants and isn’t all that concerned if that hurts Akira or Wataru. Even though Akira is gay, I kind of hope her and Wataru end up together.

I’ll give this unsatisfying manga one more book. However, barring an intriguing/unexpected development, I think that will be the last for me.

That’s all for this batch of queer comics reviews. I’ll be back as soon as possible with more stuff.

Posted by Tony Isabella at 5:45 PM