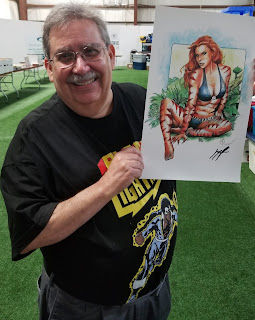 July ended on a particular high note as I attended NEO Comicon, an annual event that happened on Sunday, July 31, at North Olmsted’s Soccer Sportsplex, 31515 Lorain Road. A state-of-the-art facility, it offers year-round soccer, flag football, basketball, volleyball, health shows, arcade shows and even an indoor car show. It’s home to one of my favorite conventions in the known universe.

The two huge indoor soccer fields were filled with comics creators, comics sellers, Funko figures, cosplayers, a confectioner, a booth selling hot sauce, our friends from WBNX TV and much more. It was a blessing that I was too busy at my tables from the start of the event to the finish. It kept me from spending the money I made at the show on all that cool stuff. 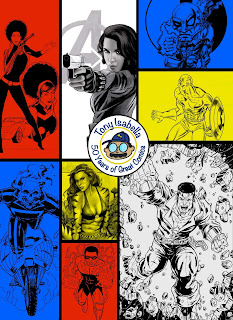 Much to my delighted surprise, NEO Comicon decided to honor my 50 years in the comics with a special commemorative poster featuring works of art from seven artists who were or have been guests of the convention. The poster was designed by Kimberly Ann. The artists: Jason Banak, Gary Dumm, Jay Fife, Matt Horak, Robert Kraus, Rick Lozano, Dave Nestler, Don Simpson and David Noble. The posters sold for $2 each with all of the proceeds going to Elyria’s Friendship APL. The individual pieces of art were silently auctioned off and, again, the proceeds were going to the charity. When I get the total donation to the charity, I’ll update this blog. 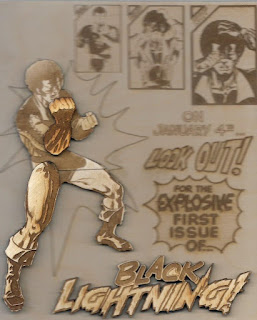 Before the show even opened, the amazingly talented Ryan Piscione of Spidey’s Quick Press presented me with this handmade, woodcut laser-art piece of the original 1970s advertisement for the debut of Black Lightning. At the end of the show, he gave me three small versions of the piece. Three of my Black Lightning friends will be very happy before the end of the month.

Jay Fife gave me a copy of his Tigra print that was incorporated into the commemorative poster. It wouldn’t be for a while, but Jay and I talked about doing something creative together. I have long wanted to work with him.

Sales were brisk at my tables. So brisk I’m pretty sure I failed to log every sale. My best guess is that I achieved around 175% of my sales goal for the convention. My favorite sale was the woman who was practically jumping for joy as she bought the first six volumes of Fantagraphics’ Little Nemo in Slumberland collection from the late 1990s. She grew up with the classic Windsor McCay hero and was thrilled to find these books.

Aside: That’s one of my greatest joys when I do my garage sales and bring that stuff boxes to conventions. I love seeing customers find  comics and books that excite them or when they get to revisit some series that loved when they were younger. 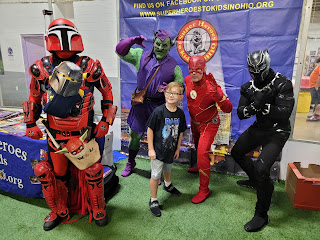 Super Heroes to Kids in Ohio was in the house. I loved this group of fun cosplayers. So much so that I’ll be a celebrity cosplayer at one of their events in September. They dropped off my costume and I’ll be trying it on later in the week. 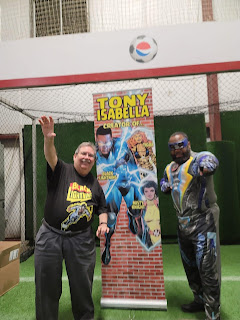 So many old friends showed up at this convention. Artist Joe Rutt, who I’ve known since grade school, disputed the notion that I had only been creating comics for fifty years. He remembers my writing comic-book stories in grade school and badgering guys like him to draw them. Guilty as charged.

Cleveland filmmaker Alex Michaels visited my booth and gave a copy of the script that won him a local Emmy. Alex and I have wanted to work together on a horror movie I came up, which would be filmed in Cleveland. Anyone want to bankroll such a venture? 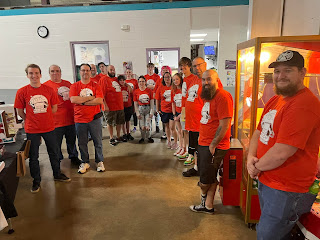 I can’t say enough good things about the NEO Comicon crew. From the promoters to the volunteers, they were exemplary.

There was only one unpleasant incident during the convention. One of those deplorables who voted for the treasonous former president came to my booth asking if I had any “Let’s Go Brandon” shirts and it escalated from there. The convention made it clear to him that he had to keep a considerable distance from me or he’d be booted from the event. I may write about him again soon, but I don’t want to distract from the overwhelmingly positive NEO Comicon.

I recommend the annual NEO Comicon to one and all. It’s a family-friendly event that has a variety of cool comics and comics-related aspects and items. The admission price this year was just $5 with kids getting in for free. I can’t think of a more pleasant way to spend a Sunday afternoon.

Since I plan to be around for many more years to come, you’ll find me at NEO Comicon every year. I want to thank the show once again for commemorating my fifty years in the comics industry. My career has had its ups and downs, but the ups have been the kind of stuff I used to dream about when I was a kid.

Posted by Tony Isabella at 8:16 PM