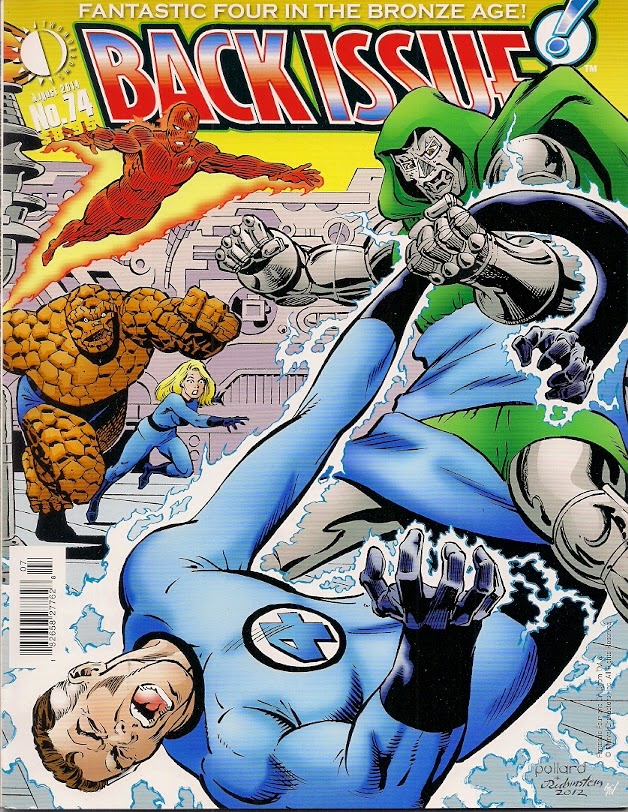 Back Issue $74 [TwoMorrows; $8.95] is dedicated to the “Fantastic Four in the Bronze Age!” It’s a swell issue filled with good info on what Reed Richards and friends were up to during those thrilling years. There are articles on comic books with interviews and art byvarious FF writers and artists. There are articles on the animated FF series, the radio shows and even the Mego figures of that time.
However...

There always has been a “however,” doesn’t there?

However...when Jarrod Buttery writes about the FF in the 1970s and gets to the one fill-in issue on which I worked, he gets my credit wrong. It’s a minor error, but I like to correct such errors when I become aware of them.

Fantastic Four #153 was running very late when I was given the not-unwelcome job of finishing a multi-issue story by Gerry Conway and Rich Buckler. Buttery identifies me only as the issue’s scripter, which implies I only wrote captions, dialogue and sound effects for existing art. That wasn’t the case.

Fantastic Four #153 was running very late, so, the very afternoon I received the rush assignment to write the issue, I sat down in my Marvel office and co-plotted the issue with Buckler.  There was no existing plot for how Conway had intended the story to end and no art has been drawn for that concluding issue.

For the next three days, work progressed on the issue as follows: Buckler would bring in pages and I would script them overnight to be sent out for lettering the next morning. Joe Rosen would letter them and send them directly to Joe Sinnott for inking. There was no time for any substantial changes to any stage of the process. The book had to go to the printers.  Which it did.

The entire issue was completed in four or five days.  Stan Lee and Jack Kirby could have probably done it in two, but the rest of us were mere mortals.

My credit for Fantastic Four #153 is properly co-plot and script. It’s a minor thing, but it’s important to me that, when it comes to my comics career, the information out there is accurate.


Back Issue is usually pretty good about this. I’ve been interviewed by many of the TwoMorrows writers. In exchange for the opportunity to fact-check what is written about me, I make myself available to those writers and answer their questions as swiftly as my own busy schedule allows. It’s a good relationship and I hope it continues for a long time to come.