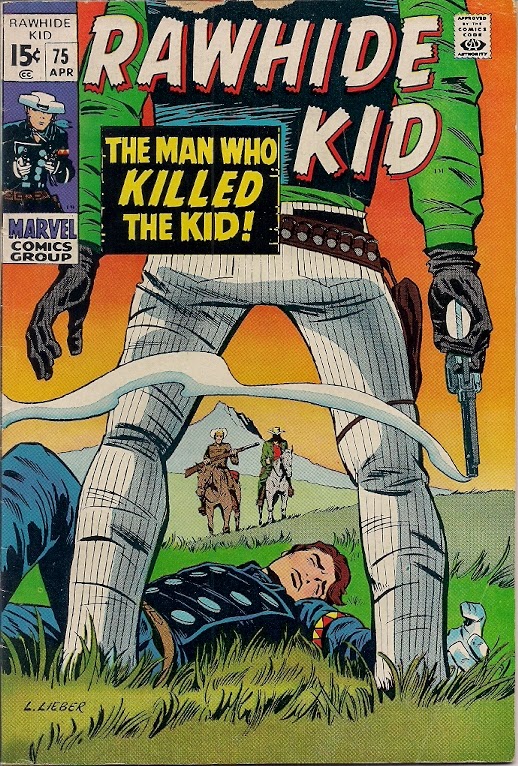 The Rawhide Kid is my favorite western comics character and one of my favorite comics characters period.  Something about the short of stature (but big on courage and fighting skills) Johnny Clay spoke to the short of stature (but big on comics-reading skills) teenage Tony Isabella.  After rereading the Kid’s earliest adventures when Marvel Comics reprinted them in a pair of Marvel Masterworks and an Essential Rawhide Kid volume, I wanted to reacquire every Rawhide Kid comic, reread them and write about them in this bloggy thing of mine. This is the 60th installment of that series.

Larry Lieber penciled and inked the dramatic cover of The Rawhide Kid #75 [April 1970]. He also wrote and penciled the equally dramatic “The Man Who Killed the Kid!” (20 pages), another never-reprinted adventure from this era. John Tartaglione inked the story and Jean Izzo lettered it.

This tale of a gang that takes over a town starts with Pete, scout for the outlaws, riding into town. He figures the gang can take the town easily. Feeling cocky. Pete makes a crude come-on to a pretty blonde woman walking with her unarmed fiancé. The woman is never named. Her fiance’s name is Frank.

Frank tells Pete to push on. The outlaw draws on Frank, winging him in the shoulder. Fortunately for Frank and the woman, the Rawhide Kid is with the town blacksmith. The Kid’s horse needs a new shoe.

Rawhide intervenes in the street altercation. First, he shoots the gun out of Pete’s hand and then he beats him with his fists for a little over a page. Pete vows to settle this score.

Joe Slade is the leader of the outlaws. Since there’s no law in the town and “no local talent to stop us,” he figures the only person they have to worry about is the Rawhide Kid. The gang ambushes the Kid when he rides out of town and leaves him for dead. Slade takes his guns for use in his town-conquering plans.

Slade plays his bogus “I outgunned the Rawhide Kid” routine for all it’s worth. His gang evicts the owners of the best house in town. He collects all the guns in town. He steals horses at will as his gang wrecks stores and businesses.

Slade’s fortunes are about to take a turn for the worse:

But Joe Slade would laugh less, if he could witness the startling scene unfolding miles away, where a fallen gun hawk is being gently nuzzled back to consciousness by a faithful friend!

Revived by his horse’s magic nuzzle but still needed treatment for his wound, Rawhide rides to the office of Doc Sam Boone. The doc is surprised to see the Kid alive and smart enough to know that needs to be kept secret.

Slade’s men are no dummies either. They recognize Rawhide’s horse  and figure the Kid must have gone to the doctor’s office. With the help of his daughter - the pretty blonde woman from the opening of the story - the doctor hides the Kid in a secret storeroom.  They finish concealing the room just in time.

Slade figures Doc Boone knows where the Kid is hiding. He gives the doc one hour to turn Rawhide over to him or his outlaws will start leveling every building in town.

Rawhide and his allies come up with a plan. Fiancé Frank chucks a stick of dynamite at the house Slade and his men seized some pages back. The door gets blown apart. The outlaws chase after the very swift Frank. This allows the Kid to reclaim his guns. I think you know what happens next...

I’ve giving you charmers another chance to get my colts! Only this time you’ll have to do it the hard way. You’ll have to take me from the front!

Slade begs for his life. The Kid spares him:

But if I did finish you off, I’d be no better than you! And that I couldn’t live with!

The town is grateful. They ask how they can thank him and he says they just did...

And now, if you’ll excuse me I’m gonna sack out for a spell...like maybe a month! Then I’ll be pushing on...to the next horizon...hoping to lose the past...and to find a future!

There aren’t layers to “The Man Who Killed the Kid!” It’s “just” an exciting and fast-paced story enlivened by the courage of the doc, his daughter and her fiancé.

The previous month’s “The Mighty Marvel Checklist” takes up half a page. This is during the time when Marvel’s stories were almost all done-in-one tales. But there are some impressive characters among the listings: The Mad Thinker, Electro, the Black Panther, the Sons of the Serpent, Ulik, the Ringmaster, the Circus of Crime and more.

The rest of the page pitches the new Marvelmania International fan club. Two bucks (including postage and handling) would get a reader the club membership kit containing a poster, a 16-page color catalog and a decal sheet.

In addition to the usual smattering of classified ads from 1970s comics dealers, this issue had an ad for “Nobody Loves the Hulk!” This “great new rock song” is on a 45rpm stereo record which also includes a second song, “Better Things.” It’s said to be available only through this ad. The cost is one dollar to Queen City Records in New Rochelle, New York. There’s no mention of who performs this song, but the ad assures us “It’s Hulkerific!”

Some online research tracked the song to a garage band called the Traits and you can listen to it here.

This issue’s full-size Marvel Bullpen Bulletins page is filled with “Awesome Announcements Calculated to Rouse You into a Seething Sea of Lethargy!” I don’t know what that means.

Among the breaking news items:

The news items conclude with:

And now, a final message to Genial Gene Colan. We know we’ve been keeping you so busy you haven’t had time to come of the Bullpen in weeks. But, honest to Aunt Petunia, pal, you don’t haveta keep introducing yourself every time you phone. We still remember you, Charlie!

In “Stan’s Soapbox,” Lee discusses the moralizing that appears in Marvel’s comics. His position is that a story without a message, however subliminal, is like a man without a soul. None of Marvel’s creators live in a vacuum and none of them are untouched by what’s happening in the world around them. I’ll second that position and the “Excelsior!” with which Stan concluded his monthly sermon from 625 Madison Avenue.

“The Mighty Marvel Checklist” notes a number of debut appearances: The Monster from the Lost Lagoon, the Schemer, Crypto-Man, Suprema, the Night-Crawler and the Minotaur. Test your Marvel trivia skills by figuring out which books these characters appeared in and when (if ever) they made a second appearance.

The “Ridin’ the Trail with Rawhide” letters column in less than a page in length because the Statement of Ownership, Management and Circulation also appears on the page.

Reader Danny Tucker of Cincinnati, Ohio wants to see Rawhide team up with Kid Colt and the Two-Gun Kid. He also wants to see 20-page stories in Kid Colt Outlaw.

Steve Bates of Springfield, Pennsylvania wants to see shorter tales in Rawhide Kid so that each issue has two or more stories. Marvel responds that there are shorter stories in Kid Colt Outlaw and The Ringo Kid.

Carl Johansen of Comox, British Columbia, Canada wants to see the return of the Scorpion. The Rawhide Kid villain. Not the Spider-Man villain. Though that would have been awesome.

Bob Franzen of France doesn’t like word balloons on covers. But I like to think of them as Freedom  Balloons and don’t hold with no socialist European guy telling me what we can and can’t have on our comic-book covers. What’s that? Most comic-book covers today don’t have word balloons? Darn it. I blame Obama.

I’ll be back with both Rawhide Kid Wednesdays and more cool stuff than anyone one blogger can handle. I can do this because I’m more than a little crazy. See you soon.

Posted by Tony Isabella at 6:24 AM