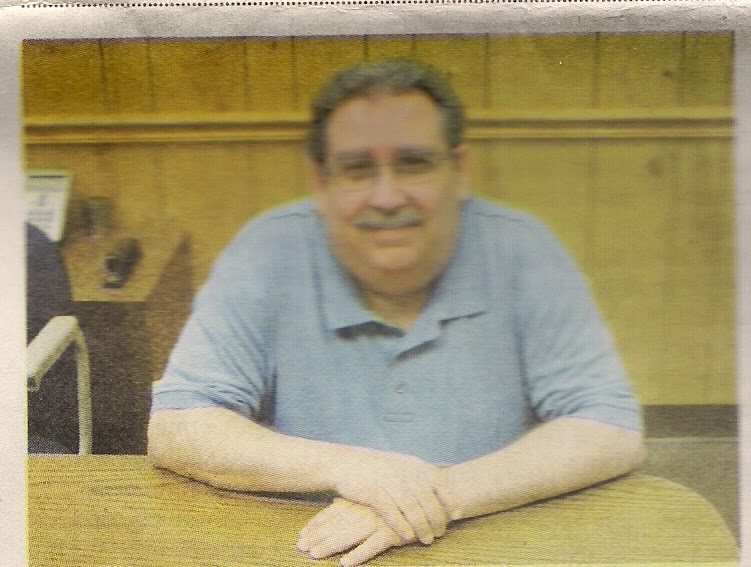 Driveway Con 2014, as I jokingly called my July 26-27 garage sale, benefited from great local publicity. Incredibly, that publicity  started because my home state of Ohio, run by the iron fist of its largely Republican statehouse, has enacted some of the most insane “gun rights” laws in the country.

Ohio’s “open carry” laws allow attention-seeking gun fetishists to walk around brandishing guns, rifles and assault weapons wherever they please. There are some exceptions to this “right” - proximity to schools, inside banks, the statehouse itself - but, pretty much short of a business adopting a “no guns” policy and posting signs,  the “open carry” crowd can pack whatever heat they want and do so wherever they want to roam.

The worst part of these Ohio laws as I see them is...the police and other law-enforcement personnel are not allowed to ask these open carry folks for their identification or their reason for strolling around with rifles and assault weapons. They are supposed to assume that such an individual is the “good guy with a gun” so beloved of the National Rifle Association and the gun manufacturers who fill that organization’s coffers. They are supposed to assume that the weapons have been legally purchased and that these “good guys” who carry them have the legal right to do so.

The Medina “open carry” crowd, bolstered by gun activists from well outside the city, threw a fit over this. One couple walked around the police station with their weapons and their infant children in their arms. Because they were the very model of “good guys with guns.” Encouraged by the outside activists, the local “open carry” group announced they would stage an open carry walk. That’s where I came into the picture.

I am not against “open carry” in all circumstances, but there must be limits as to the nature of the weapons being carried and there must be on-the-spot accountability of the individual’s right to be in possession of openly carried weapons. It should never be akin to the “Wild West” of the gun fetishist’s fantasies, especially since, in the actual “Wild West” of the past, it wasn’t at all unusual for  the local sheriff to demand visitors to the town surrender firearms while in town.

The “open carry” advocates planned to hold an “open carry” walk on Saturday, June 21. They claimed their intention was to educate all of us fearful types about their gun rights.  My guess is that they were far more interested in drawing attention to themselves and in intimidating those opposing Ohio’s ill-considered “open carry” law.

Their plans made the front page of The Gazette. I read they planned to hold a meeting at Dickey’s Barbeque Pit and then use the parking lot of the restaurant as a staging ground for their walk.Dickey’s being one of my favorite local restaurants and all, this pissed me off more than a little.

I called the restaurant to express my dismay and inform the place that, much as I liked their food and all, I wouldn’t be patronizing them in the future if they allowed the “open carry” people to open carry in or around their premises. The invisible hand of the market doesn’t have to be holding a gun.

The person I initially spoke to was shocked on account of Dickey’s had no idea this was happening. The manager had agreed to let the “open carry” group have a meeting at the restaurant, but, somehow, never realized the group would be packing heavy heat when they did so. The group had met in the restaurant once before, but, on that occasion, they were not armed.

The manager wasn’t happy about this turn of events and his workers were incredibly unhappy about it. No sane person wants a bunch of gun-toting maniacs - and, sorry, but if you feel the need to walk around with an assault rifle, I’m not going to assume you’re that good guy with a gun the NRA keeps carping about - around when all they want to do is enjoy a meal or get through their shift.  I kept  in touch with the restaurant all morning.

I was in the parking lot of The Gazette when I spoke for the final time with the Dickey’s manager. I was there to pick up a free kit for my garage sale.

The owner of the restaurant had made it clear in no uncertain terms that the “open carry” zealots would not be allowed to use his place of business as a staging ground for their walk or, if they were armed, use the meeting room. I was delighted to receive this news.

I went into The Gazette and, while I was there, informed them of my latest conversation with Dickey’s and that their front-page story was now out-of-date. One reporter was told to call the restaurant to confirm what I’d told them...and I was asked if I would consent to be interviewed and photographed for a follow-up story the paper would run on Saturday. Since I never figured on dying a peaceful death, I agreed to the paper’s request.

The headline of the Saturday edition of The Gazette made it clear: Restaurant says no to “open carry” walk.

The photo of me ran below the fold as part of The Gazette article on customer reaction to the decision made by the Dickey’s owner on the matter. The reaction was overwhelmingly favorable. Few people were comfortable with the brandishing of rifles and assault weaponsin public places or on public streets.

When I went to the restaurant Saturday evening, I was thanked by a number of employees. During the next few weeks, I was also thanked by friends and strangers. Even some of my most conservative Medina friends and neighbors agreed with my position.

The Gazette follow-up story on the “open carry” walk said there were 22 participants. Based on the comments posted to the group’s Facebook page, half or more of those participants were not Medina residents.

There’s not much I can add to the discussion of Ohio’s “open carry” laws and other gun laws. The NRA’s positions are not the mainstream positions. I think we can enact reasonable gun regulations that do not infringe on sane interpretations of the Second Amendment. The kind of regulations supported by law-enforcement personnel and, for many years, by the NRA itself. However, that’s a conversation for a future bloggy thing.

Unexpectedly, my opposition to the local “open carry” group led toamazing publicity for Driveway Con 2014. I’ll be back to tell you about that in the next day or so.