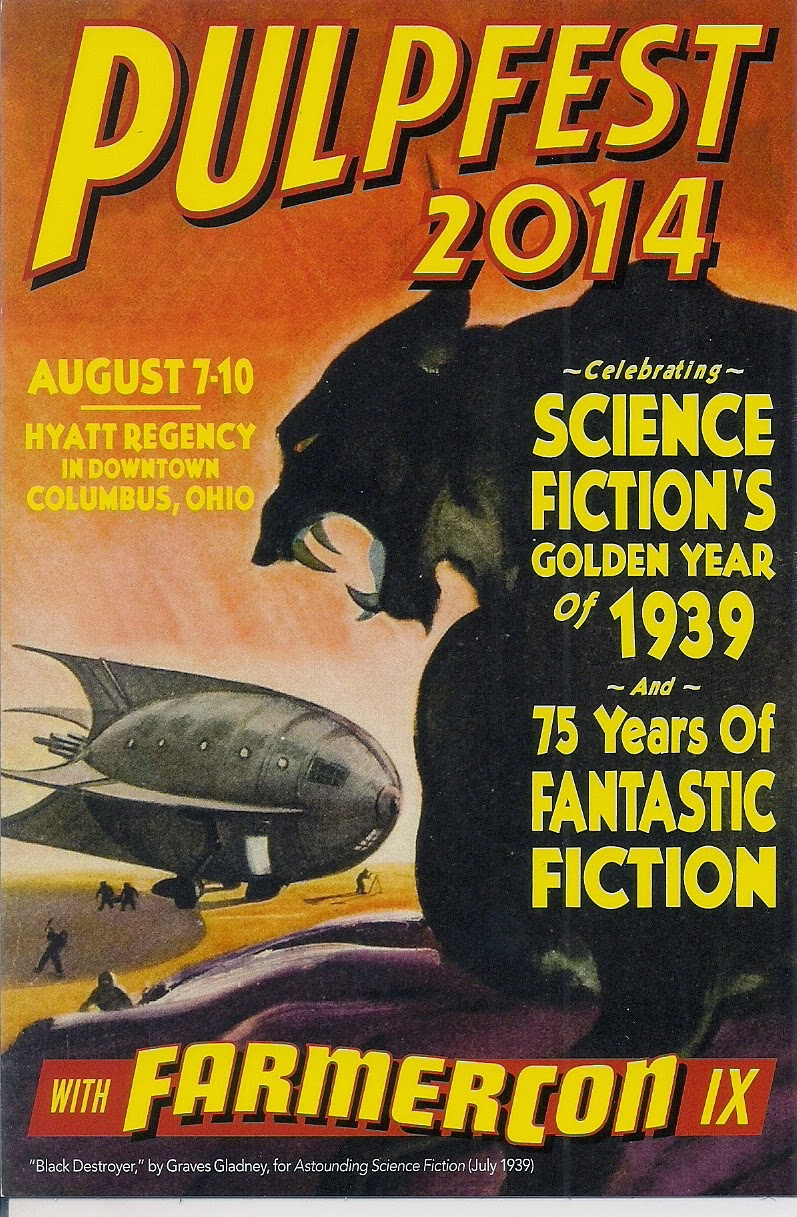 PulpFest 2014 was celebrated on August 7-10 at the Hyatt Regency in downtown Columbus, Ohio. Although pulp magazines are a very minor interest of mine, the yearly event is one of my favorites because I get to spend time with so many good friends I don’t see often enough.

PulpFest isn’t a “work” convention for me, not that any convention I attend is all work. I have never been a guest of the convention, nor should I be. My “pulp” credentials consist of having written a couple issues of Doc Savage for Marvel, adapting a few prose stories that originally ran in pulp magazines to comics stories, co-writing the very pulp-like Captain America: Liberty’s Torch novel with Bob Ingersoll and writing an essay or two for my friend Anthony Tollin’s outstanding line of Sanctum Books reprints. Pretty thin.

However, this year, I didn’t have to buy a ticket to the event. My friend Peyton Holden won a free pass to the convention in an online contest. Since he couldn’t make the trip from Los Angeles, he asked the convention to give me that free pass. I would be starting this year’s event with some extra spending cash. Thanks, Peyton!


The Hyatt Regency is one of my favorite hotels. The rooms and the service are always first-rate. The hotel restaurant is excellent. Next to the lobby level of the hotel are gift shops and a wonderful food court. The Columbus Convention Center is attached to the hotel on the other side. If you were so inclined, you’d never have to go outside during your stay.  However, staying inside means you would miss the great Columbus “Arena District,” which is also filled with great entertainments and restaurants.

I’ll get back to PulpFest before you start thinking I’m working for the Columbus Convention Bureau...

Early registration for the convention was Thursday, August 7, from 5-9 pm. Early-bird shopping in the large dealers room was available from 6-10 pm. This was one of the only disappointments of the con. When I went to the hall after a quick dinner, only a couple dealers were in the hall and even partially set up. When I went back around 8 pm, only a few more were up and running. Since I was experiencing what would prove to be a gout attack that made walking clumsy and painful, I called it a night.

Since my main interest in PulpFest is seeing my friends, the early-bird shopping isn’t a draw for me. However, for others, like that very happy guy I ran into on my way to the elevators, it’s a huge deal. He was grinning from ear to ear because he had just bought a Jim Steranko-drawn poster of Norgul signed by the artist and Walter B. Gibson, the creator of the magician detective. Besides writing most of The Shadow pulp novels and creating much of the character’s background, the prolific Gibson wrote several books on magic and enough comic-book and other stories to fill the careers of a dozen writers. But I digress.

PulpFest members receive The Pulpster, an annual magazine featuring articles related to the convention. There was lots to celebrate in 2014. Seventy-five years ago, in 1939, the very first World Science Fiction Convention was held and a dozen fantastic fiction pulps  made their debuts. Eighty years ago, the “shudder pulps” began to appear on newsstands.

Those were but two of the key anniversaries celebrated this year. Edd Cartier, Hannes Bok and Virgil Finley, legendary illustrators,  were all born 100 years ago. It was The Avenger’s 75th anniversary  and the 50th anniversary of when Bantam Books being reprinting the adventures of Doc Savage in paperback format. Between the PulpFest programming schedule and articles in The Pulpster, these landmark events were given their due. For late-night entertainment, spread out over Thursday through Saturday night, the convention showed all 12 chapters of the Buck Rogers serial.

On Friday morning, before the convention, I went to the food court for my usual breakfast from Chicken ‘N’ Egg. The place offers great fresh food at a very reasonable price and I eat there almost every morning when I’m staying at the Hyatt. By good fortune, I ended up sitting down with long-time friends Anthony Tollin, Rob Davis, Ron Fortier and new friend Rick Lai.

Tollin is on his third successful career. He worked in comics for nearly two decades. Then he became a renown writer of radio history booklets and worked with many of the legends of that medium.  Now, via his Sanctum Books, he published wonderful books reprinting the pulp novels of The Shadow, Doc Savage and others. We’ve been good friends for over four decades.

Rob and Ron are the dual brains and talents behind the “new pulp” juggernaut that is Airship 27 Productions. “New pulp” denotes new novels and stories in the pulp tradition, a neat mix of the classic and the modern. They’ve published over ninety books since they got started and could release their one-hundredth book before the end of the year. I’ll talk more about this in a bit.

It’s the dear friends who bring me to PulpFest every year. Besides the gentlemen mentioned above, I spent some fun time with Michelle Nolan, the noted comics historian; Mike Carbonaro, legendary comics dealer and the founder of the Big Apple Comics Conventions; and Sam Maronie, a freelance writer who made his first sale to the Marvel Planet of the Apes black-and-white magazine during my editorship of the title. Outside the convention, I met my friend Scott Galloway for lunch on Friday and, later that afternoon, hung out for a spell with Ken Eppstein of Nix Comics.

Located in the Hyatt’s nearly 16,000-square-foot Regency Ballroom, the PulpFest dealers room is the heart of the event. This year, it had over fifty dealers selling pulp magazines, facsimiles of pulp magazines, vintage paperbacks, modern-day pulp fiction, old radio shows, first editions and more.  There were more comic books there  than in previous years, offering great issues from the 1940s thru
the 1960s. If my Vast Accumulation of Stuff was not too large - at present - I could have easily gone crazy in this room. So much cool stuff on display.

Something I saw several times: dealers directing customers who were looking for a specific pulp magazine issue or old paperback to some other dealer they thought might have what the fan sought. There’s a real sense that the dealers love this stuff just as much as their customers.

Digression. Tollin told me Street and Smith’s Love Story Magazine was the best selling of the company’s pulps, even outselling The Shadow. He also told me, much to my surprise, that no one has  published any facsimile editions of any romance pulps. Makes me want to read one of them all the more. End digression.

PulpFest had 21 panels and readings over the weekend in addition to the Buck Rogers serial and the Saturday night auction. I make sure to attend at least one panel every year and, this time around, it was “The Fun of Writing Pulp Fiction,” moderated by Ron Fortier and featuring a half-dozen writers of “new pulp” fiction. I found this description online:

New Pulp is a movement of writers, artists and other imaginative souls to create new Pulp Fiction for the modern age. It is fast-paced, plot-oriented storytelling of a linear nature with clearly defined, larger than life protagonists and antagonists, creative descriptions, clever use of turns of phrase and other aspects of writing that add to the intensity and pacing of the story.

There are around two-dozen publishers of new pulp fiction, a group that includes comic-book publishers such as Dark Horse, Dynamite and IDW. Many of the prose novels are self-published and print-on-demand works. The authors and publishers of the novels don’t make a lot of money from the books. The books and anthologies are labors of love in every sense of the term.

I came away from the convention with a six-inch stack of new pulp fiction. My new friends Dick and Norma Enos gave me a copy of The Yesterday Men, the latest in Dick’s Rick Steele Adventures series. I also bought books by Mike Baron, Ron Fortier, Jim Beard, Charles Saunders, Wayne Reinagel and others. I’ve got some great reading in my near future.

Unfortunately, my second and final PulpFest disappointment showed up early Saturday evening. A gout flare-up in my left foot got so bad that it seemed prudent to curtail my weekend and head home on Saturday night. Two hours later, I was back in my Medina home and shuffling around like Quasimodo.

The gout passed in a couple days. Weirdly enough, the treatment for such reoccurrences is to stop taking my anti-gout medication until the attack passes. You can add that to the long list of the great many things I do not understand.

The gout attack didn’t dim my enthusiasm for PulpFest in the least. I’m already planning to attend next year’s event. I hope to see you there as well.