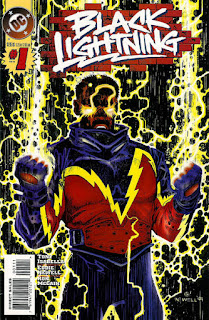 Taking a line from Ghostbusters, The Beat’s Jeff Trexler described it as “Dogs and cats, living together!” He was talking about Black Lightning Volume 1, a collection of my first Black Lightning series that will be published by DC Comics next April.

I’ve known about the collection for a while, but didn’t feel right about announcing or discussing it. I figured that was something DC should do. To quote The Quiet Man, another favorite movie of mine, “The proprieties at all times.”

Then I started getting e-mails and phone calls from people who had seen Amazon and various websites that sell directly to libraries offering the book for pre-order. I get librarians spotting the book as they consider what to order for their libraries, but who looks for stuff like this book on Amazon, especially a book that, given the many issues between DC and myself, they could not possibly be expecting to find? Heck, I don’t even do that and I have as healthy an ego as the next comics creator.

With so many people asking me questions, I felt I should make some sort of statement on my Facebook page. My first post was just the basic stuff:

I wasn't going to say anything about this until DC announced it, but, since it's now available for pre-order on Amazon and library sites...and a link to Amazon.

That was followed by:

You can probably guess that I have known about the trade paperback collection of my first Black Lightning run for a while now. I wasn't going to comment on it until DC announced it and only comment on it now - albeit briefly - because it's already available for pre-ordering. Who says I can't keep a secret?

These two posts led to hundreds of likes, dozens of comments and a number of interview requests. I turned down the interview requests because I didn’t feel there was much to report at the present time. Which led to lots of speculation, including a few posts from yours truly as I got caught up in the excitement.  I knew I would have to make a more formal statement.

With apologies to Geoff Johns and Dan DiDio if I am betraying any confidences, here’s what I can tell you...

Geoff Johns reached out to me on June 2, asking if he could phone me. I like Geoff and his writing, so I said sure and told him when would be a good time.

Geoff wanted to talk about Black Lightning and my dissatisfaction with my decades-unpleasant relationship with DC Comics. Just as I always have, Geoff sees a lot of potential in my finest creation. It’s a potential the previous DC management clearly never saw. We talked about what it would take to make things right between me and DC so that Geoff could, in good conscience, consider developing the character in this bigger-than-1976-or-even-1995 new comics world.

That conversation will remain private for now. Let’s just call it a good start. It was the first time in two decades a DC executive didn’t speak to me like I was a child or insane.

One of my major disappointments was that DC had never reprinted my Black Lightning work. Indeed, the former management took pains to insure it wouldn’t be reprinted. When I realized DC was planning no celebration of Lightning’s 25th anniversary, I asked if they would lease me reprint rights to publish a collection of my stories. The then-management of the company laughed in my face.

Within a short time, Geoff and Dan DiDio were talking to me about reprinting my Black Lightning work. DC had the right to publish the collections whether I approved or not, but Geoff and Dan brought me into the loop. They wanted to do books I liked.

Initially, I only wanted this first volume to include just my own 1970s Black Lightning stories. If I had held to that position, they would have honored my wishes. However, Dan asked me to consider the fans, like himself, who would want a complete volume of that first Black Lightning run. He made a good case. I withdrew my objection.

I haven’t spoken to or communicated with Geoff or Dan since shortly before Comic-Con. I haven’t communicated with them since because I knew they would be busy with the aftermath of that stellar event. If you were at Comic-Con or followed the news coverage of it, you know DC had a lot going on there.

As of my last conversation with them, my understanding is that the book will contain Black Lightning #1-11 from the first series. It will also include the Denny O’Neil/Mike Nasser story scheduled for issue #12. That story was included in Cancelled Comics Cavalcade and also published in an issue of World’s Finest. I’m okay with the inclusion of the non-Isabella stories in Black Lightning Volume One because I appreciate a fan’s desire to have the entire run in one book and also because I don’t want to deny Denny O’Neil, Trevor Von Eeden and Mike Nasser whatever royalties they’ll receive from the reprinting of those stories.

The fact that this is Black Lightning Volume One shows there is a desire on everyone’s part to do a Black Lightning Volume Two with my 1990's series. Certainly, good sales on this first book will be a determining factor re: the second book. I’m heartened by how many fans and librarians have already posted their intentions to buy the first volume.

It’s common for comics creators and comics lovers to speculate on what else might be coming down the road. As I’ve try to stress, the process of reconciliation between DC and myself has just begun. To look at it as a different kind of relationship, we met for lunch, got along well and maybe we’ll do dinner and a movie. We’re not at the holding hands stage.

“The proprieties at all times.”

I have told Geoff what I think DC can and should do. I think there is a sincere desire to make things right. Again, this is something the previous management was unwilling to even consider. I am very pleased Geoff and Dan have reached out to me. I would love to put aside my justified anger at DC Comics past and enjoy more cordial relations with the DC Comics present.

Everything else is speculation at this point. Obviously, I’ve made little secret of my desire to resume writing Black Lightning comic books. My reinvention and updating of the character in the 1990s resulted in what many, including myself, believe was the best work of my career. I would truly relish the opportunity to and challenge of reinventing Jeff Pierce for 2015.

The Shadow War of Hawkman? Yes, I’d love to see that reprinted as well. I think artist Richard Howell and I did outstanding work on that series. I’d love to see it reach a new audience.

As far as I’m concerned, everything is on the table. I’m up to any challenges that come my way. In recent years, I branched out into comic-strip writing. I’m currently pitching “B” movies - monsters, action, horror, science fiction - because that’s become a passion of mine. I’m writing a “memoir of sorts” of my life in comics and plan to follow that with a book of comics-related essays. I wake up every morning, eager to get to work on whatever I’m writing today. This is who I am. This is who I want to be.

I won’t have anything else to say on this stuff for a long while. I’m not going to obsess about it. It will unfold as it will unfold and in the fullness of time. When there’s something to report, I’m sure the news will make its way on to the Internet because that’s what news had a habit of doing.

To those who have requested interviews, I’m sorry to disappoint you for now. You can certainly find ample material from today’s bloggy thing and my recent Facebook postings. When I feel it’s appropriate to be interviewed, I’ll answer your questions as completely and as honestly as I can.

I’ll be back tomorrow with my review of Sharktopus Vs. Whalewolf. Because that’s also who I am.