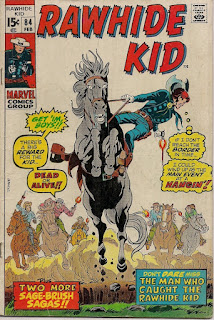 The Rawhide Kid is my favorite western comics character and one of my favorite comics characters period.  Something about the short of stature (but big on courage and fighting skills) Johnny Clay spoke to the short of stature (but big on comics-reading skills) teenage Tony Isabella.  After rereading the Kid’s earliest adventures when Marvel Comics reprinted them in a pair of Marvel Masterworks and an Essential Rawhide Kid volume, I wanted to reacquire every Rawhide Kid comic, reread them and write about them in this bloggy thing of mine. This is the 69th installment in that series.

The Rawhide Kid #84 [February 1971] has a eye-popping new cover by Herb Trimpe. It’s a classic image of the Kid pushing his horse to the max while firing back at his pursuers. The excessive cover copy is redundant. The image alone sold me on this comic, even though I knew the stories within were reprints.

All three stories in this issue - When Six-Guns Roar, The Man Who Caught the Rawhide Kid and the long-of-title The Girl, the Gunman and the Apaches - were reprinted from The Rawhide Kid #27 [April, 1962]. You can read what I have previously written about these Stan Lee/Jack Kirby/Dock Ayers collaborations by going back to May 23, 2012 in the bloggy thing archives.

The rest of the page was a “SUPER POSTER OFFER” from Marvelmania. For two dollars (including postage), fans could order four posters  that were said to be three feet high. There was Spider-Man by John Romita, Doctor Doom by Jack Kirby, Captain America by Jim Steranko and the Incredible Hulk by Herb Trimpe. I don’t recall buying these posters, so I can’t tell you anything about them from any personal experience. A quick check on eBay saw them being offered for sale for hundreds of dollars. I wish I did have them.

On the inside front cover, MONSTER S-I-Z-E MONSTERS that were seven feet tall in authentic colors with glow-in-the-dark eyes could have  been yours for $1.25 including postage and handling. You could get the Frankenstein Monster or Boney the Skeleton. Still on hand were comics dealers Howard Rogofsky, Passaic Book Center, Robert Bell, Grand Book Inc. and Clint’s Books. A buck would still buy a sample copy of The Comiccollector fanzine.

This issue had a house ad advertising The Mighty Marvel Western #12 [January 1971] and The Ringo Kid #7 [January 1971]. The former was a 25-cent comic book with a new cover by Herb Trimpe and reprints of the Rawhide Kid by Stan Lee, Jack Kirby and Dick Ayers; Kid Colt by Lee, Jack Keller and Christopher Rule; and Two-Gun Kid by Larry Lieber, Ayers and Vince Colletta.

Ringo Kid #7 was a standard 15-cent comic book. It also had a new Herb Trimpe cover. Inside, there were three short Ringo Kid stories drawn by John Severin and a non-series story drawn by Bob Forgione with inks by Jack Abel.

Another item plugged Iceman’s guest-shot in Amazing Spider-Man and said Marvel was considering giving Bobby Drake a strip of his own.

Marvel vacation news was next. Roy Thomas went to Great Britain for three weeks. John Verpoorten was going to West Germany. Gene Colan was on his way to Europe. Meanwhile, Barry Smith has completed his arrangements to make New York his home.

There was a huge plug for Thor #104 by Stan Lee and John Buscema, which didn’t have the impact Stan clearly hoped it would have. Even when I looked at the cover for the issue, I could barely remember anything about its contents.

There was an item about Marvel writing an entire issue of Spider-Man without exclamation points and no one seemed to have noticed. Such matters would be left to individual writers.

Finally, in “Stan Lee’s Soapbox,” the Man explained why the Silver Surfer title had been cancelled. It didn’t sell.

The issue’s editorial content concluded with a “Marvel Masterwork Pin-Up” of the Rawhide Kid fighting an Apache warrior. Pencilled by Larry Lieber with inks by John Tartaglione, it was lifted from the cover of issue #74.

July is crunch month for my memoir of sorts. Bloggy thing posting will be erratic, but there will be new content here as often as I can manage while still hitting my daily goals for the writing of my book. Thanks for sticking with me.