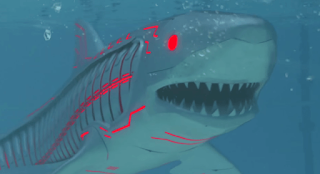 Sharknado 3: Oh Hell No! will make its debut on Wednesday, July 22, on the SyFy Channel. To celebrate the arrival of this new cultural phenomenon, the channel is airing seven new movies in eight days. Though three of the movies will have already aired by the time you read this bloggy thing, here is the schedule:

Because I’m a fiend for such movies, I’ll be watching every one of them and reviewing them here. First up is Roboshark.

A roboshark is what you get when a great white shark gulps down an alien probe launched from a distant starship. In seconds, the shark is transformed into a high-tech killing machine...though there will eventually be a question as to whether or not that was the intent of the unseen aliens.

The transformation scene happens almost immediately. The roboshark bumps into the propeller of a nuclear submarine. The roboshark and the sub regroup. While the sub tries to fire its torpedoes at what it believes - with cause - is an attacking enemy, the shark chews its way into the sub and destroys it.

The above all happens within minutes. Though Roboshark is an uneven film, there are several times when it rockets from scene to scene. The fast-action pace does drag on occasion, usually when the movie is belaboring some business meant to be hilarious. When Roboshark is on point, it’s hilarious. When it drags, it leaves marks on the carpet like an incontinent dog.

Roboshark has a good pedigree. Director and co-writer Jeffery Lando has directed and/or produced over a dozen “B” movie thrillers while writing six of them. Co-writer Philip Roth has close to a hundred producer credits, 25 writer credits and 19 director credits. They have considerable experience with this kind of thriller.

The actors aren’t familiar faces, but most of them know their way around a CGI monster. However, Alexis Peterman is new to the SyFy style. She plays a 38-year-old wacky weather woman who wants to be a serious newsperson. She’s also the mother of a teenage daughter she can’t control and the wife of a goof of a husband who has a job with the water department of the city of Seattle. Peterman does a good job projecting determination, exhaustion, fear and scruples as the movie demands. I’d like to see her do more films like this one. But better than this one.

Nigel Barber is tiresome as a mad admiral who has vowed to destroy Roboshark. The movie returns to his manic behavior again and again. The humor of the character wears thin quickly.

Vanessa Grasse is cool as the teenage daughter whose social media expertise drives a good chunk of the movie. I think the actress is fairly young, but she makes her character convincing, even in some of the goofiest scenes.

Laura Dale, who was in Lake Placid Versus Anaconda, looks too young to be the bitchy newswoman who tries to steal the Roboshark story from Peterman’s character. She’s playing the same kind of character she played in Lake Placid Versus Anaconda and playing her a little too broadly for this movie. But she has a definite presence and I like her. If I were making monster movies - which is something that I should do some day - I’d cast her in a more winsome role. Maybe someone like Melody of Josie and the Pussycats.

Roboshark swims to Seattle, eating a small seaplane near the shore. It gets into Seattle’s water system, using it to travel from place to place. It emerges in a Starbucks-like coffee shop and Peterman gets a good look at it. No one believes the “wacky weather girl” - there’s a wonderful montage of her in goofy costumes - but a video of the attack goes viral and proves she saw what she saw.

Grasse shows up when Roboshark emerges at a sewage treatment plant. Tagging along with her mom and a cameraman, she uses her mad social media skills to great effect and humor. Like when Roboshark starts following her on Twitter. So much for superior alien intelligence. More on that in the spoilers section.

Roboshark heads to the mall. It can “swim” through the water system and move on land like a snake. Some “Roboshark on soldiers” action  doesn’t end well for the soldiers.

Billionaire “Bill Glates” arrives at the water department offices. He assumes command because he is more powerful than the president. It’s a belabored plot development. It’s padding for padding’s sake. Whatever jokes the filmmakers thought they could get from it, they miscalculated.

Here’s where Roboshark gets crazy funny. We see people all over the world tweeting about the shark. Dad, shaken by the presence of the crazy admiral who has commandeered his offices, lets Peterman know the creature is heading for the high school. The Scooby trio gets  there before the military and just in time for a swim meet. Ready for the genius crazy?

Daughter sends a tweet to Roboshark asking it to not hurt people and signs it with a crying face emoji. Roboshark doesn’t hurt any of the swimmers or a spectator who fell into the pool. It sends a crying face emoji to the daughter. She actually pets Roboshark and makes friends with it. Then the soldiers show up.

The finale takes the action to the Space Needle, the iconic symbol of Seattle. Apparently, the lonely Roboshark wants to phone home. This is one of literally dozens of movie references in this movie. The SyFy channel itself gets at least three name-checks. Every one of the references screams that the writers were enormously pleased with themselves. They shouldn’t have been. You must learn to kill your darlings, gentlemen.

Admiral Crazy and the Space Needle fall smack dab on Roboshark and poor Laura Dale. The oddly sympathetic creature is shattered into tiny glowing bits. No one seems to care much about Dale’s demise.

The closing scene has a dark-haired woman in sunglasses - perhaps a nod to Not of This Earth - holding a small Chihuahua whose eyes suddenly glow red. I’m amazed we didn’t get a question mark in the middle of the screen. However, if we’re going to talk sequel, let us consider the possibility of Dale’s newswoman character digging her way out of the Space Needle wreckage unharmed and with glowing red eyes.  I think the time is right for Robobitch.

Roboshark isn’t a very good movie. It could and should have been so much better. There was some tasty meat to the proceedings, but the film needed a tighter script and more good actors. The ladies - Peterman, Grasse and Dale - do all the heavy lifting with little support from the rest of the cast. If you’re me and you can get enjoyment from even bad monster movies, it’s worth watching. If you’re less charitable than me, you should avoid it.

I’ll be back tomorrow with my review of Mega Shark Versus Kolossus. See you then.

Posted by Tony Isabella at 7:28 AM