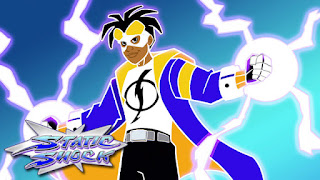 I’ve known Michael Davis, self-proclaimed master of the universe, for roughly two decades. In 2013, as a special guest at Comic-Con, he was described thus...

Davis is “an artist, writer, mentor, and entertainment executive. He’s created original content for comics, education, television, radio, and publishing as an independent producer. He’s also held positions as president/CEO of Motown Animation & Filmworks; president of animation for Magic Johnson Entertainment; and co-founder of Milestone Media. Alumni from his mentor program are some of the most respected talents working in comics today.

Michael has long claimed to be a creator of Static, easily the most successful character to come out of Milestone Media. He has made a rock-solid case for that claim. Yet Milestone does not credit him as a creator of Static. In fact, though Milestone 2.0 is coming our way, Michael is not part of that revival.

Every year at Comic-Con, Michael has hosted “The Black Panel.” It’s an amazing event in which he brings together some very interesting creators for a discussion of black comics and movies and much more. He invited me to be on the panel several times. The one time I was at Comic-Con in recent years, I couldn’t be on his panel because I was scheduled to be at my own spotlight panel.

Rich Johnston covered this year’s edition of “The Black Panel” for Bleeding Cool. With apologies for taking such liberties, I’m going to quote the first several paragraphs of that article:

In an incredibly emotional speech to begin this year’s annual Black Panel at San Diego Comic Con, its founder Michael Davis began by saying “over the last year, there have been a lot of changes in my life” building up to his realisation that “The world doesn’t know I created Static Shock.”

Talking through the details, he was specific about how all the character’s family are all based on his own family. He took us through the details. “My sister Sharon, the inspiration for Sharon Hawkins, was murdered and the character was created in homage of her” and it was the same with Michael’s grandmother, who also inspired a character in the show. One of his joys was telling his mother that his sister lived on in Static and they watched the cartoon together. Last year his mother died after a very swift illness and at the funeral his met brother and sisters he never knew he had. He doesn’t know his father, “I think it’s the guy who owns Microsoft” – and the place in tears burst into laughter. Meeting his nieces and nephews, he found those who liked Static, but somehow knew that he didn’t create him.

He’s talked about a growing problem with not getting the credit for co-creating the character, in the media, from peers, from the new Milestone, and how it keeps exacerbating the problem.

But he emphasises that his issue isn’t about credit. It’s about his sister. Describing the show as  “the most popular African American character created by black creators.” and Sharon Hawkins as the most popular character on the Static Shock cartoon, “Sharon Hawkins is the star of that show” – now he feels has been estranged from that. He found out Warner Bros were doing a Static live action series by reading it. Same about the return of Milestone.

He talks about his absolute darkest pain, of calling his mother and forgetting she was dead, putting a gun in his mouth and pulling it to find that it was empty. Thinking about loading it, he answered  the phone to fellow panelist Tatinia El-Khouri, who helped him at that so difficult time.

He says he is done with the whole soap opera thing. How can we create a force that means something and is inclusive. ”It’s time to go back to being happy and black and shit.”

[You can find the whole article here and I hope you’ll go and read it because then I won’t feel so bad about appropriating the above several paragraphs.]

Reading those paragraphs was like a punch to the gut. What Michael was expressing was just so damn familiar to me. I thought back to the week when DC editor Pat “the Rat” Garrahy fired me from Black Lightning without cause, mostly because he wanted to bring in some writer who would be indebted to him for the job. Then Mike Carlin, who’d promised to have my back if I had problems with Garrahy, blew me off. Then, Paul Levitz, my alleged friend of over two decades, a guy who could have fixed this with a word, refused to stop that injustice. I had devoted my working life to Black Lightning. I had risked my life in Cleveland’s inner city to make sure I portrayed its Brick City neighborhood as realistically as possible. All of a sudden, after doing the best work of my career, I was unemployed and, as various DC staffers slandered me in public and private, becoming more unemployable each day. I couldn’t work. I couldn’t get work. I couldn’t deal with the life stress that now seems so trivial to me. Which is when I ended up in a garage with the doors closed tight and my van running.

I got through it. I got help. I took control of my depression and maintain that control every day of life. The secret for me is that I know my depression and I’m always on guard against it.  As much as possible, I surround myself with good, supportive people. I work and I do that work with clean and honest hands, mind and soul. I’ll never find myself in that locked-down garage again.

I make no claims to understand the depth of Michael’s pain or the sense of betrayal he feels. We are different people. But it’s easy to empathize with him.

I make no claim to understanding the dynamics and situations which led Michael to leave Milestone 1.0 and not be invited to be part of Milestone 2.0. I know I would want him on my team.

If there’s a case to be made that Michael isn’t a creator of Static and the Static Shock cartoon, no one has made that case. He should be credited and celebrated and rewarded for his pivotal role in the creation of Milestone’s most popular character.

As I’ve often said, the history of the comics industry is a history of talented creators being cheated and mistreated by publishers and editors and sometimes their fellow creators. It’s a cruel systemic problem that, though it is getting better, is still a long way from being eradicated.

That Milestone, itself poorly treated by DC Comics in the past, is perpetuating this unfairness is utterly shocking to me. I couldn’t stay silent.

Milestone needs to make this right.

The company needs to make it right sooner rather than later.

The comics world is watching.