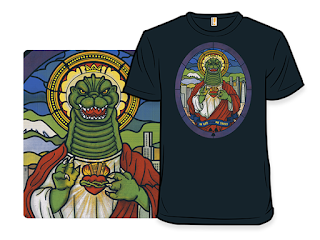 As I barrel towards age 64 - Will you still love me? - I take note of changes in my life and my sense of self. One of those changes is that I’ve begun wearing t-shirts in public.

If that seems like an odd topic for even one of these mini-bloggy things of mine, blame it on my buddy Bob Ingersoll. On his Facebook page, the fit-and-trim former attorney told a poster than he only wears t-shirts when riding his stationary bike or using his treadmill.

For more years than I can remember, I only wore t-shirts in my home or at my garage sales. Even if I was running errands, I would put on a shirt with a collar, usually a short-sleeved polo shirt. Even at conventions, surrounded by people wearing t-shirts, I felt that I should strike a more professional note. Or maybe it was residual memory from the too many years when comics fans like me were looked down upon by too many people.

These days, of course, we live in a world which accepts, sometimes ruefully, that we the fans have won. Hollywood comes to comics for its subject matter. The world watches news of our conventions and wishes they could be part of them. Libraries stock comic books and graphic novels. Schools teach comics. We’ve won.

I’ve spent virtually all of my adult life working in the industry I love. So I’m no longer the least self-conscious about wearing my Avengers or Captain America or Spider-Man t-shirts in public. Among my prized articles of attire are a San Diego Comic-Con t-shirt from the year I was a special guest and the Yoda shirt - “Judge Me by My Size, You Do?” - I bought from a smiling little person at the Star Trader emporium in Disneyland. At conventions, I alternate between polo shirts and t-shirts depending on my mood or the presentations I’ll be making. I wear my love of comics and fantasy for the world to see. I do so proudly.

There are two notable exceptions to my devil-may-care attitude re: the wearing of t-shirts. I own the “In Godzilla We Trust” t-shirt shown above. In fact, I own two of them because I love it a whole bunch. But, after a religious neighbor of mine commented he found it blasphemous, and only partly in jest, I only wear these shirts around my house or at my garage sales. One of the few tenets of the First Church of Godzilla, of which I am the founder and pastor, is that we don’t stick our “faith” in other people’s faces. We don’t need to do that. We are confident in our beliefs. We believe in the separation of church and state and, occasionally, the separation of entire city blocks from the ground.
The other exception? I won’t wear DC Comics t-shirts or any other DC Comics articles of clothing. Though DC has different management today from that which cheated and mistreated me for four decades or so, I would feel unclean wearing anything that shows DC characters, logos or symbols. It would literally pain me to do so.

If you ever see me wearing a DC Comics shirt, you can take it as a sign that DC has finally made things right with me. Heck, if that happens, I might start selling DC shirts. I can think of a number of Black Lightning designs that would be the epitome of sartorial style, perfectly suitable for the home, the office and the exciting night life of a super-hero.

Wear your comics and monster t-shirts with pride, my brothers and sisters. I do.

Posted by Tony Isabella at 6:06 AM