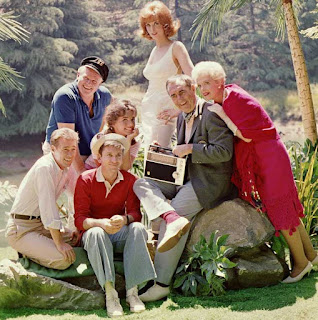 Just sit right back and you'll hear a tale,
A tale of a fateful trip
That started from this tropic port
Aboard this tiny ship.

Here is an amusing political game you can play if you, like me, are already weary unto death of the national clown car that is filled with Republican presidential candidates. This game requires you to imagine the members of that cray-cray circus taking what they think is a short break from their antics. They board a tiny ship for what has been advertised as a three-hour tour.

Much to the consternation of that wacky bunch - and much to my own delight - the weather starts getting rough. Alas, their tiny ship is tossed, ultimately going aground on an uncharted island. Looks like the candidates will miss the 2016 election and, if we’re real lucky, the 2020 and 2024 elections as well.

Wait a minute, you exclaim. That sounds suspiciously like the basic plot of Gilligan’s Island, the popular television show that starred Bob Denver. Why, now that you mention it...

Allowing for inflation and several decades of politicians who took money from the poor to give to the rich, Howell would most likely be a billionaire today. Maybe Gilligan and the Skipper are Gulf War veterans suffering from PTSD. Perhaps Ginger is one of those insane anti-vaxxer. Maybe the Professor is self-certified. Maybe Mary Ann won the cruise because she could not have otherwise afforded it on the minimum wage paid by her three jobs. You can speculate on the contemporary quirks of the castaways all you want, but none of that is essential to the game. I just mention this stuff because it came to me and I don’t want it stuck in my head. So, now, it’s stuck in your heads. You’re welcome.

Amazingly, there are over 30 people running to be the Republican Party’s candidate for President of the United States. Really. But, for the purpose of this game, I’m only going to list the ones you have heard of:

Though I haven’t figured out all my seven choices for the candidate and cast match-ups, I’m leaning towards Bobby Jindal as Gilligan, Rand Paul as the Professor and Lindsey Graham as Mrs. Howell. Keep in mind that there are three female roles in the show and only one woman candidate. You’ll have to do some crossplay to fill out your list. Which brings me to the word of the day.

Crossplay, a portmanteau of crossdressing and cosplay, is cosplay in which the person dresses up as a character of a different gender. Crossplay's origins lie in the anime convention circuit, though, like cosplay, it has not remained exclusive to the genre.

Needless to say, I can’t wait to see what my beloved bloggy thing readers come up with re: this silly little game.

Get your friends and family members to play the game with you. Make this an Internet meme or a Twitter hashtag. The important thing is to have fun with it...because once these campaigns get up to speed, fun might become a very scarce commodity.

Posted by Tony Isabella at 7:25 AM