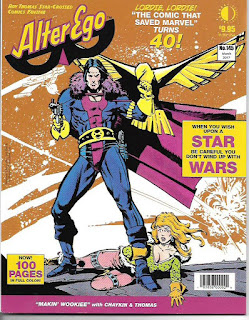 Alter Ego #145 [March 2017; $9.95] is the special Star Wars issue of Roy Thomas’s comics fanzine. As an editor and writer at Marvel Comics in 1977, Thomas brought the Star Wars property to Marvel, adapted the movie for the first six issues of the title and worked on a few more issues beyond that.

Star Wars has often been called the comic book that saved Marvel. This issue features a long and informative interview with Thomas on the origins and pitfalls of the comic. It also has interviews with original artist (and co-adapter of the comics version of the movie) Howard Chaykin, penciler Rick Hoberg and inker Bill Wray. The Star Wars section of the issue concludes with Lee Harsfeld’s article on the 1978 adaptation of Star Wars, which was published by Pendulum Press for its younger readers and drawn by Charlton Comics mainstay Charles Nicholas.

Also in the issue: Michael T. Gilbert on comics and jazz; a piece remembering historic fanzine publisher G.B. Love and Houston comics fandom; a lively letters column; and a look at African-Americans in the comics published by Fawcett in the 1940s.

Alter Ego is a star. It’s my favorite magazine of comics history and I recommend it to one and all.

Keep watching the bloggy thing for more mini-reviews on notice on books and magazines from TwoMorrows Publications.