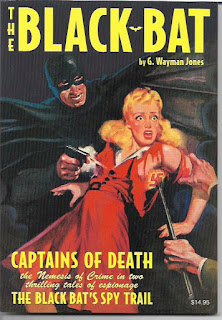 The Black Bat #3: The Black Bat’s Spy Trail and Captains of Death  [$14.95; March 2016] features two book-length Black Bat adventures from the March 1940 and May 1943 issues of Black Book Detective. These stories are written by the prolific Norman Daniels under the Thrilling Publications house name of “G. Wayman Jones.” Here are the title page blurbs for each of these novels.

Battling valiantly against sabotage, wholesale murder and espionage, the nocturnal champion of the victims of crime flies into the Valley of Death - ready to fight grim traitors bullet for bullet and blow for blow!

When the diabolical Dr, Mars and a sinister crew of saboteurs stalk, the Black Bat and his allies go all out to exterminate the Nazi rats who plot destruction!

In “The Belfry,” author and pulp historian Will Murray’s discusses how the Black Bat proved himself very adaptable, switching from his domestic criminal foes to the Nazis and their ilk. In the earlier of this issue’s two novels, the villains were not explicitly called Nazis. Two years later, that wasn’t a concern.

Publisher Anthony Tollin adds the informative content of this book with “The Mask of Kin Platt,” the writer/artist who took over the Mask comic-book series - the name change was part of a deal struck with DC Comics over the similarities between Batman and the Black Bat - with the July 1940 issue of Exciting Comics. Finishing out this volume is that six-page comics story.

Posted by Tony Isabella at 9:07 PM