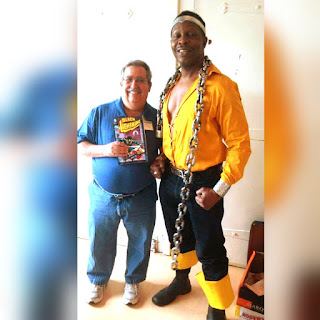 This bloggy thing of mine is still on hiatus, but, having finished a challenging portion of one of my three major March projects, I’m treating myself to a stealth posting.

I have a list of cosplay I’d like to see at my 2017 appearances.  Many are characters that I created or co-created (Black Lightning, Misty Knight and Tigra). Others will be characters I wrote, such as Hawkman, Hawkwoman, the Johnny Blaze Ghost Rider and others. Some will just be characters I love like the Blonde Phantom, Cosmo the Merry Martian, Herbie Popnecker, the original Sugar and Spike, the classic Zatanna, Mademoiselle Marie, and others.
If you come to my convention booth/table cosplaying as these characters, I will give you a dollar and a special certificate.

The certificate? That will be a whole lot cooler. It will have all kinds of flowery language and a terrific design. It’ll be suitable for framing. All I need is a really good designer.

If you want this gig, e-mail me. I’ll send you the copy that needs to be included on the certificate as well as which characters need to appear on it. Quote me your price, send me a quick rough and we will be good to go on this gig. Besides paying you, I’ll praise you in this bloggy thing and tell other prospective clients how to get in touch with you. This gig won’t make you rich, but it might lead to other work and it will surely make some cosplayers happy.

Okay, now that I’ve written this down, it sounds like I’m the kid who could only get a dog to play with him by tying a hamburger around my neck. However, I’m willing to come off as pathetic to see some great cosplay. If it works, it’ll be fun. If it doesn’t work, well, it won’t be the first time a plan of mine went awry.

Feel free to spread this bloggy thing cosplay contest all over the Internet. By my next convention, I’ll have a phone that will allow me to take decent photos. You better believe I will share them with my readers here and elsewhere. Always forward.

Posted by Tony Isabella at 8:16 AM