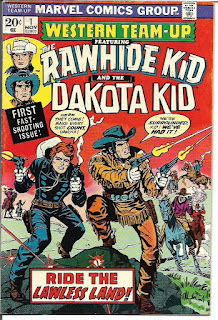 The Rawhide Kid is my favorite western comics character and one of my favorite comics characters period.  Something about the short of stature (but big on courage and fighting skills) Johnny Clay spoke to the short of stature (but big on comics-reading skills) teenage Tony Isabella.  After rereading the Kid’s earliest adventures when Marvel Comics reprinted them in a pair of Marvel Masterworks and an Essential Rawhide Kid volume, I wanted to reacquire every Rawhide Kid comic, reread them and write about them in this bloggy thing of mine. This is the 104th installment in that series.

Western Team-Up #1 had a cover pencilled by Lieber with alterations by John Romita. The Grand Comics Database opines the cover art was inked by Lieber and Romita.

The cover story was almost certainly intended for Rawhide Kid. At 14 pages, “Ride the Lawless Land” was the same length as the new RK tales that had been appearing in Rawhide Kid. Like those stories, it was written and penciled by Lieber, lettered by June Braverman and colored by George Roussos. The only difference between this one and the previous Rawhide Kid stories is that it was inked by Vince Colletta instead of Roussos. In previous bloggy things, I have been critical of Colletta’s inking on western stories of the 1960s and 1970s, but he did a pretty decent job here.

The Dakota Kid was not an existing Marvel character. I don’t think he was intended to be an ongoing character. He was just one of the many intriguing characters Lieber created during his run.

I also don’t think Western Team-Up itself was anything more than a tryout of sorts and a way to use up an inventory story. Certainly, if the book was intended as a ongoing title, it would have led with a better-known western hero such as Kid Colt or the Two-Gun Kid. This was the only issue of the series.

That’s the prologue. Let’s look at the story.

“Ride the Lawless Land” opens with the Rawhide Kid taking a break after outdistancing a posse. He hopes he’ll be able to find peace and quiet in the Dakotas. One panel later, someone is shooting at him, though just to get his attention.

That someone is Cliff Morgan, who says people around here call him the Dakota Kid. He has a rep as a fast gun and thinks he can take the Kid. Rawhide refuses to fight without a reason. He just wants to find a job. This impresses Morgan, whose father - the Colonel - is the biggest rancher in the area.

The Colonel wants nothing to do with "gunslinging trash." But Wayde Morgan - Cliff’s brother and clearly the good son - convinces his dad to give Rawhide a chance. Cliff and Wayde have a sister, though she never does more than agree with her brothers and try to put in a good word for the “gunslinging trash” that is Cliff and the Kid. She’s never named in the story, so, as is the case with all of the unnamed women in stories like this, I’m going to think of her as “Tigra” Morgan.

This is a ridiculously plot-heavy story. Some of the pages get real crowded with small panels to move it along. Try to keep up with me as I relate the goings-on.

Rawhide gets a job. The Colonel berates Cliff, saying he should be more like his brother. Rawhide takes to the work. Logan, the foreman of the ranch, plots with owlhoots to rustle the spread’s cattle. Cliff neglects his work to go visit his girlfriend Lily Lamont in town. Wayde has to fill in for him.

In the town saloon, Luke Thompson, a thug-ish saloon customer, gets fresh with Lily. Cliff tells him to leave his girl alone. Thompson calls him out. Thompson gets shot dead:

Holy cow! Morgan let Thompson clear leather...and then he drew and fired before Thompson could squeeze the trigger!

The sheriff arrests Cliff. Even though the sheriff is confident Cliff will be cleared, the Colonel is pissed at “that irresponsible whelp” and wonders when his son will become a man. Meanwhile, the Colonel’s good son is no match for the rustlers when they attack. He’s gunned down by them.

The Colonel is devastated and angry. When the treacherous foreman opines the Rawhide Kid must have tipped off the rustlers, the old man accepts the theory instantly. Rawhide has to flee for his life.

Lily helps Cliff escape from jail so her beau can settle the score for his brother. The sheriff knows Cliff has crossed a line with this reckless action:

Now he’s done it! Before he could’ve beaten the charge against him easy! But now he’s a fugitive from justice! And there’s no turning back!
The Colonel doesn’t welcome Cliff. He says his son belongs in jail awaiting a hangman’s noose. He blames Cliff for Wayde’s death and tells his son to get out of the house and never comes back.

Believing Rawhide responsible for his brother’s death, Cliff hunts him down. Along the way, he gets into several gunfights and his rep as a fast gun grows. When Cliff finally catches up with the Kid, he finds Rawhide has tracked down the rustlers.

Cliff and the Kid see that it was Logan who was working with these rustlers. The gunplay begins and ends a few panels later with only the two young men left standing. Cliff thinks its over, but the Kid knows better.

RAWHIDE: For you it’s just starting! You broke out of jail! Now you’re a fugitive on the run - like me!
CLIFF: And there’s no turning back, is there?
RAWHIDE: There never has been...for any of us!

Back at the ranch, “Tigra” asks her father if he’ll ever find it in his heart to forgive Cliff.

THE COLONEL: It’s too late! I’ve lost both my sons! One was killed and the other does killin’!

Elsewhere, Cliff and the Rawhide Kid part company. Each to follow their own perilous path in an uncertain world.

“Ride the Lawless Trail” could have easily been a 20-page story. Though I remain convinced it was a leftover story from the ongoing Rawhide Kid title, I can see why it could pass as an actual team-up between two heroes and a back-door pilot for the Dakota Kid.

Cliff and his family get more “screen time” than the Rawhide Kid. The family dynamic described above was very different from all of Marvel’s other western heroes. If westerns were as prevalent on TV today as in the era of the great Warner Brothers shows, I could see the Dakota Kid being a series I would have watched.

Before we get into the issue’s second story - more proof to me that this issue was meant to be an issue of Rawhide Kid - let’s look at what else was in this comic book.

Marvel comics of this era didn’t have the classiest paid ads. There were several pages in which dozens of classified ads were crammed together on the same page. Here’s a quick rundown of some of what a reader could expect to see:

Prizes or cash for selling greetings cards; iron-on designs for t-shirts; Charles Atlas making you a man; health aids to help those who are “too skinny”; sell the newspaper Grit to earn cash or neat prizes; Corgi toy cars; information on getting a “high pay job in drafting”; learn how to play the guitar in seven days; train at home to be a veterinary assistant; Honor House novelty items like a Raquel Welch pillow; get in a job in conservation; the “genuine Spider-Man medallion coin” discussed in a previous installment of Rawhide Kid Wednesday; “gain weight [to] be muscular and admired”; and attend LaSalle Extension University.

The only editorial page beyond the stories was a half-page “Marvel Bullpen Bulletins” topping the usual half-page ad for the fan club FOOM (Friends of Ol’ Marvel). This was the same page that appeared in the all-reprint Rawhide Kid #117 [November 1973]. 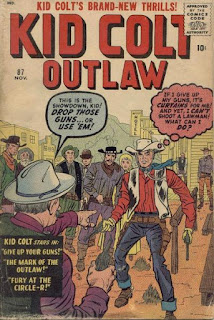 That brings us the issue’s second story, an untitled six-page story starring the Gunsmoke Kid with art by the legendary Jack Davis of EC and MAD and magazine covers and advertising art fame. Davis drew a bunch of stories for Marvel in the 1950s and came back to do some more in the early 1960s. This one first appeared in Kid Colt Outlaw #87 [November 1959] and was the last Gunsmoke Kid story.

The GCD has a synopsis for this not-very-good story:

The superstitious Piute braves are tricked when the Kid makes them think the claim jumper is a werewolf. That’s a mite hard to swallow these days, but few western comics of the past treated indiginous people with respect. After reading this story, I wondered if some Marvel staffer had added the opening caption to somewhat temper the story. It reads:

The Piutes were a noble tribe, and when a group of renegades tried to convince them to rise against the white man using the old tribal magic and superstition, they were tossed out onto the desert plains to find for themselves against a wild and unruly west.

If any of my bloggy thing readers have the original comic in which this story was first published, I’d love to know if my speculation is correct.

The story doesn’t give much of a sense of who the Gunsmoke Kid was. But the Marvel Wikipedia makes him sound interesting enough to have had his own series:

The Gunsmoke Kid was a gunslinging terror by the time he was seventeen years old. All that changed, however, when his father was shot, robbed, and left for dead. It was too much for his poor mother, a husband dead and a son who was getting into fights all over the territory. She wrote him a letter begging him to give up his gunslinging, but her health was already failing. She was dead by the time her son arrived home.

From that day on, the Gunsmoke Kid was a changed man. He made a promise to his mother that he would mend his ways, and her death just deepened that resolve. He kept her photo near to him to remind himself of that promise. He would still get called into fights as a result of his reputation, but he no longer went for kills. And instead of looking for fights, he looked for people in need. He figured that by saving others, he was also saving himself. He was a gunfighter with a conscience.

He brought in the man who killed his father alive, and found the evidence the law needed to convict him. His other adventures have included helping a man on a gold rush save his claim from a jumper who had a whole tribe of renegade Piutes backing him up. He ended up tricking the Piutes into thinking their friend was a werewolf. Another time, he helped a rancher expose a rival who had been rustling his herd, and defended the herd until he had gotten evidence on the rustlers. The head of the rustlers turned out to be a wanted man, and the law was only too glad to take him in. His subsequent activities are thus far unrevealed.
The more I learn about the Rawhide Kid and Marvel’s other western heroes, the more I wish I could read (or even write) new adventures with them. I’ll probably have to settle for coming up with my own new takes on such characters without infringing on Marvel’s claims to them.

Rawhide Kid Wednesday will return next week. Come back tomorrow and I’ll have something else for you.