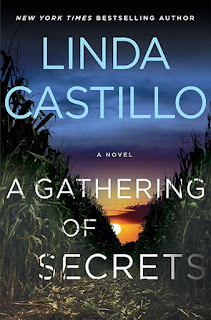 Kate Burkholder was raised Amish until a horrible assault and the aftermath of that assault drove her from that community. Now she’s the chief of police of a town including that same community. Burkholder is the hero of a series of ten novels by Linda Castillo, crime thrillers set in the fictional town of Painters Mill, Ohio.

A Gathering of Secrets [Minotaur Books; $26.99] is the latest Kate Burkholder novel and one of Castillo’s best. A young Amish man experiencing Rumspringa dies horrifically in a fire that destroys his family’s barn. The reader knows from the start that this is a murder; it doesn’t take Kate and the other investigators long to determine that as well. For one thing, the animals normally housed in the barn were led away from it before the fire.

The victim seems to be a typical, well-regarded young man. He was industrious and skilled, working two jobs. He was planning to be baptized in the Amish faith and marry his girlfriend. However, he had secrets and those secrets are not forthcoming from the always intensely private Amish community. Indeed, there are those willing to kill to keep those secrets.

Though happily cohabiting with John Tomasetti of the Ohio Bureau of Criminal Investigation, Burkholder struggles with her past and with her tenuous ties to her old life. This case generates a great many questions, some of them questions Kate must ask herself. She faces deadly perils during the course of her investigation. She uncovers shocking revelations. The closer I got to the end of this book, the faster I was turning its pages.

Even you’re not a fanatic for crime thrillers set in Ohio like me, I believe you’ll enjoy A Gathering of Secrets and Castillo’s other  Burkholder novels. Here’s the list of them: 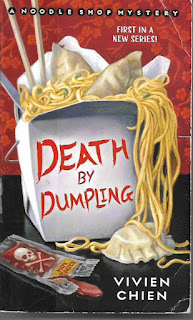 I have discovered yet another mystery series set in my native Ohio. Death by Dumpling: A Noodle Shop Mystery by Vivien Chien [St. Martin's Paperbacks; $7.99] is set in the Asia Village restaurant and shopping area of Cleveland. Lana Lee is a young woman working in her family’s Ho-Lee Noodle House following a brutal break-up and a dramatic departure from her previous employment. She’s a likeable and relatable protagonist.

When the Asia Village property manager is murdered, suspicion falls on Peter, the Ho-Lee Noodle House cook, and Lana, who delivered the fatal dumplings to Mr. Feng. What follows is a fun thriller wherein Lana courageously-if-not-always-wisely pushes through overlapping webs of secrecy to uncover the true killer.

Chien delivers an authentic setting and interesting characters. I thought the novel dragged a bit in places - it probably could have been a few dozen pages shorter - but was glad I pressed on to the conclusion. She and Lana won me over. I’m looking forward to their next noodle shop mystery. 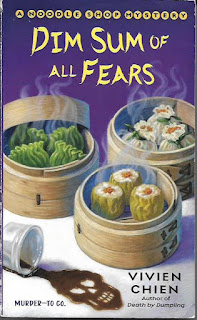 I wrote the above review a few weeks back. Dim Sum of All Fears: A Noodle Shop Mystery [St. Martin's Paperbacks; $7.99], the second in the series by Cleveland author Vivien Chien, arrived at my library in time for me to take it on my trip to Las Vegas to be a guest at the Great American Comic Convention. Between the four-hour flight and some downtime in my hotel room, I finished the novel before I boarded my return flight.

The second book is better than the first one. Lana Lee is now kind of sort of dating Detective Adam Trudeau. She’s interviewing for a job that would get her out of the family noodle shop. She’s made a new friend in Isabelle Yeoh, owner with her seemingly flighty husband Brandon of the souvenir shop next to Ho-Lee Noddle Shop. That’s when it all comes tumbling down around her.

Her parents go to Taiwan to be with Lana’s ailing grandmother. They leave her in charge of the restaurant, which creates a rift between Lana and her law school-attending older sister. And, because this is a mystery, Isabelle and Brandon are brutally murdered in their store. Despite admonishments from her detective kind of sort of boyfriend to not "play" detective, Lana starts investigating with the handicap of having to run the family restaurant as well.

I like Lana. She’s not driven by any need to be a detective, though she’s now been put into that position for the second time. She is in this matter to uncover the truth and get justice for her friend. No matter how many times the other parts of her life bare down on her, she is determined to succeed. There are, of course, several suspects, some of them unpleasant to the extreme and all of them concealing things about their various pasts. There is crushing self-doubt and life-threatening danger. Our girl, with a little help from her friends, manages to find the truth and the justice she seeks for her friend.

One of my favorite moments in this novel is when Detective Trudeau avoids telling Lana that he told her so. He’s just glad she is okay and more than willing to leave any further discussion to some other time. He’s a smart guy. I’m thinking he’s going to quickly learn to appreciate how capable and smart Lana is...and maybe work with her in the future. I’d like to see that.

Dim Sum of All Fears gets a thumbs up from me. I’m looking forward to the next book in the series, Murder Lo Mein [$7.99], which will be released in late March of 2019.

That’s all for today, my friends. I’ll return tomorrow with another all-new bloggy thing.