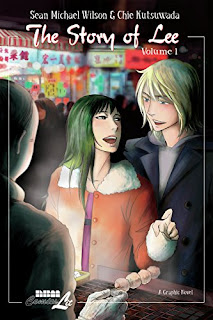 My local Medina County library and the ClevNet system of which it is a member continues to be a great source for reading comics that I would otherwise never see. Recently, I discovered a writer whose work was unfamiliar to me.

The Story of Lee Volume 1 by Sean Michael Wilson and Chie Kutsuwada NBM; $11.95] was published in 2010 under NBM’s ComicsLit imprint. Here’s the back-cover come-on:

Lee, living in Hong Kong, meets Matt, a fine young Englishman. Their relationship becomes stronger by the day, despite their deep cultural differences. But there is Lee’s Dad to contend with; [he] views this affair very suspiciously. And there is another contender for Lee’s heart, a Chinese man, whose jealousy takes on twinges of xenophobia. Will Lee and Matt’s relationship successfully cross the cultural divide and overcome the negative odds? Two worlds collide creating good sparks… and bad ones.

Though not autobiographical, Story of Lee is informed by Wilson’s experiences in Hong Kong and women he knew. This gives a reality to his story of two young people who meet and fall in love. I found I could relate to Lee and Matt, but also to Lee’s father and to Wang, the young man Lee’s father would prefer to see Lee with. There are no overblown dramatic confrontations in this initial volume, just the family and personal conflicts most of us have had to deal with our own lives.

Wilson’s writing is good and natural. Kutsuwada’s storytelling and drawing is also good and never feels forced. I like these two lovebirds and I’m eager to read the second volume in the series. That one will flip the situation somewhat because it will have Lee moving to Scotland to attend university there. Consider this first volume recommended. 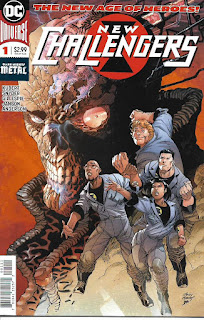 There’s a lot I don’t get about the DC Universe “Dark Night/Metal” titles, although, in the name of full disclosure, I wasn’t enamored of the original “Metal” titles either. At the top of each issue is a come-on that reads “The New Age of Heroes,” but several of these comics feature existing heroes or new takes on existing heroes. I don’t glean why the pencil artist get top billing on the covers of the comics when it doesn’t appear they’re produced in anything much the usual manner, the usual manner being that the story comes first and everything is (or should be) in service of that story. If the pencil artists are plotting these titles, wouldn’t they be credited for that in the interior credits?
Anyway... I read New Challengers #1-3 [$2.99 each] because I’ll read pretty much any comic book called Challengers. The original Challengers of the Unknown series was a favorite of mine from Jack Kirby’s origin issue through many other talented creators. I was somewhat cooler on subsequent rebooted versions, but I still read them.

Written by Scott Synder and Aaron Gillespie, these new Challengers are people who have died and now live on borrowed time. The launch artists are Adam Kubert (pencils) and Klaus Janson (inks), but, by the third issue, penciller V Ken Marion and inker Sandu Florea are listed in the credits with Kubert and Janson.

An individual claiming to be Professor Haley of the original team tells the team they’ve been selected to join “a proud tradition of death-defying individuals” brought together “to uncover, confront and solve the mysteries of our universe.” As he tells it, hundreds of men and women have been Challengers with the original team (as we know it) being the most prolific and public. This Prof doesn’t inspire trust, but the notion is intriguing enough that I’ll stick with the title for a bit, especially since “my” Challengers make an appearance and add to the intrigue.

The writing and art on these issues are good. When I sort the next batch of comics loaned to me by a good friend who buys a lot more comic books than I do, I’ll read the subsequent issues of The New Challengers and write about the title again. 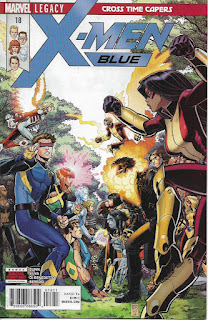 When Brian Michael Bendis brought the original teenage X-Men to our time, I thought the concept was audacious and entertaining. These time-lost mutants have overstayed their welcome, as I learned when I read X-Men Blue #10-23 and X-Men Blue Annual #1 over the past weekend. The regular issues are priced at $3.99 each with the annual going for a dollar more.

The issues are written by Cullen Bunn, who is very prolific and who has done several comics I’ve enjoyed in the past. X-Men Blue isn’t one of them. Indeed, when I look over these issues, what I see is mostly stories and concepts Chris Claremont already did and did so much better. I wish I could be more positive here.

I did like the notion that Hank (Beast) McCoy would feel at a loss in the modern world. In his time, he was a big science guy. Today, he’s years behind the other Marvel Universe scientists. While I’m not sure turning to the Dark Arts is in keeping with the character as I knew him, I could see him having an extreme reaction to what he feels is his shortcomings in the science department.

Beyond that, what X-Men Blue gives us are retakes on old Claremont concepts like an endless barrage of alternate universe X-Men, Mojo on Earth and time-crossed adventures. There are stories that cross into other X-Men titles and Venom. Add so-so art and my interest in this title is virtually non-existent. Sorry, Marvel.

One more thing I did like. Trapped on our Earth, Mojo sets up his own television network specializing in fake news. It’s redundant - our real-world Fox News has already been weaponized - but it's a kind of fun idea nonetheless. I’ll probably at least skim the rest of the issues I have to see if anything good is done with this idea.

Posted by Tony Isabella at 8:19 AM