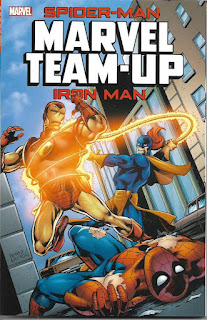 Published last month by Marvel, Spider-Man/Iron Man: Marvel Team-Up [$24.99] reprints my story "Hometown Hero" featuring Whiplash. Set in my home town of Cleveland, the tale focuses on Mark Scarlotti as he deals with an enemy even more dangerous to him than Iron Man (Jim Rhodes) and Spider-Man.
Here's what Amazon says about this trade paperback:
Web-head meets Shell-head in a collection of their greatest Marvel team-ups! When the Avengers are captured, Spider-Man and Iron Man find themselves caught in a tussle through time between Kang the Conqueror and Zarrko the Tomorrow Man - a saga that draws in the Human Torch and the Inhumans! Spidey and Iron Man will need a little help from Doctor Strange if they are to survive the mind-bending powers of the Wraith! But the villain has a friend too - the deadly Whiplash! Things get explosive when the volcanic menace Magma erupts into our heroes' lives! And it's a team-up with a diff erence as Jim Rhodes in the armor joins a black-costumed web-slinger in battle with Blacklash! Discover why Spidey and Iron Man are two great tastes that taste great together!
COLLECTING: MARVEL TEAM-UP (1972) 9-11, 48-51, 72, 110, 145
Writers: Gerry Conway, Bill Mantlo, Tony Isabella, Len Wein, Herb Trimpe, David Michelinie
Pencils: Ross Andru, Jim Mooney, Sal Buscema, Herb Trimpe Greg LaRacque