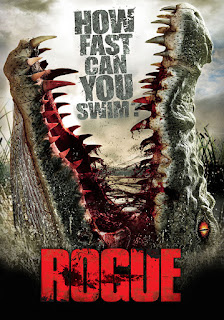 First up is Rogue (2007) from Greg McLean, the director and writer of Wolf Creek. Which I’ve never seen, but maybe I will on account of I enjoyed this movie. The DVD I got from the library identifies this as the “un-rated” version, but I have no idea what that means. To sum up, of all the killer crocodile movies ever made, Rogue is one of them. Here’s the Internet Movie Database synopsis:

An American journalist on assignment in the Australian outback encounters a man-eating crocodile while trapped on a rapidly flooding mud island.

That’s factual, but not complete. For complete, I have to warn you that there are

Jaded travel writer Pete McKell [played by Michael Vartan] takes a tourist river cruise to kill some time while he’s waiting for his ride out of the Australia. The cruise captain is plucky Kate Ryan [Radha Mitchell]. The passengers are the typical mix of potential crocodile chow: a widower grieving for his wife, a kind of creepy photographer, an upper crust sort of fellow with his ailing wife and rambunctious daughter. Also getting in on the action are Kate’s ex-husband and his jerk friend.

When Kate spots some smoke on the horizon, she decided to check it out in case anyone needs help. Someone does need help. Namely Kate and the cast as the crocodile attacks. Jerk friend is the first to die and, after that, it’s the bad luck of the draw as to whom gets chomped next.  The climax comes when Pete must rescue the seriously injured Kate in the lair of the crocodile.

Rogue has some bite to it. There are some surprising developments and a character who rises to the occasion in true making of a hero style. This almost makes up for the many factual errors concerning crocodile habits and the like. The acting is adequate throughout. The lightning, not so much. According to a synopsis I read after I had watched the movie, Kate was far more badly injured than could be seen.

The movie won an Australian Film Institute award for “best visual effects” and was nominated four other times. It is based on a true story of Sweetheart, a giant saltwater crocodile responsible for a series of attacks from 1974 to 1979. Sweetheart attacked outboard motors, dinghies and fishing boats, but never killed anyone. He was captured and died en route to captivity.

The bottom line? Worth watching once, especially if you enjoy films of large animals eating people. I do, which is why I’m working on a screenplay called Mar-a-Lago Mamba Massacre. 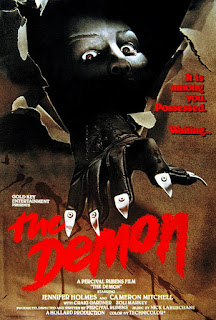 The Demon is a 1979 South African slasher film that was released in the United States under the title Midnight Caller. Clearly meant to leech off the amazing success of Halloween (1978), it stars Cameron Mitchell and Jennifer Holmes and was directed/written by Percival Rubens. It is a schizophrenic film and, as I watched it, I wondered if it was two slasher movies combined into one. Here’s the Internet Movie Database summary:

Random people are terrorized by a malevolent man who brings their worst fears to life.

That summary is just plain wrong. The random people part is correct and the killer is, indeed, malevolent. However, if anyone’s worst fears are involved in the movie, Rubens failed to make that clear.

The first movie involves a fourteen-year-old girl who is kidnapped from her home by a faceless Michael Myers type. He murders her and then a driver who gives him a lift back to town.

Two months later, the girl remains missing. Her parents hire ex-arine and freelance psychic detective Colonel Bill Carson (Cameron Mitchell) to find her, though the girl’s dad is pretty sure she’s dead and wants to get revenge on her killer. Carson gets the usual psychic vibes. The girl’s body is found.

Another vibe gives a vague location for the girl’s killer. Her dad goes after him and is also killed. The distraught mother and wife blames Carson and shoots him dead. All in all, Mitchell is on the screen for around ten minutes.

The second movie has our killer stalking two young women. There is quite a bit of nudity in this movie, culminating in a tense battle and chase through the house the women share. When the movie ends - the killer presumably dead - it ends so abruptly that I wondered if the DVD had neglected to include the movie’s final scenes.

The Demon is not a good movie. Its best moments are the nudity and the closing battle between the killer and his intended victim. It drags often. Normally, I don’t consider nudity to be either a plus or a minus, so it’s a measure of how bad this movie is that I list it as one of the best parts of the film.

This isn’t worth watching. If you watch it, my sacrifice in watching it will have been for naught.

I got The Demon in the 2009 Creature Collection, a two-disc, five-movie set. The other films are Snowbeast (1977), Blood Tide (1982), Lady Frankenstein (1972) and Night Fright (1968). I’ve previously reviewed Snowbeast and Blood Tide and, if you click on the titles, you’ll be directed to my reviews of same. I will be reviewing the other two movies soon.