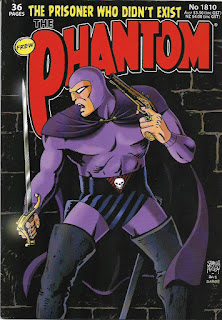 Against all odd, I became a fan of Lee Falk’s Phantom. I say that because, as a very young child, I only saw the Phantom newspaper strip on Saturdays. Because Saturday was the only day my father had time to read a newspaper. When he was finished reading the paper, I would read the comic strips.

Obviously, the story strips didn’t make much sense when I only saw them once a week. That didn’t stop me from making up my own tales based on the Saturday strips. The strip I most enjoyed doing this with was the Phantom.

I was delighted when I discovered the Phantom comic books published under the Gold Key imprint. Since that time, I don’t think I ever passed on buying a Phantom comic book. Not every Phantom has been a good one. The bad ones give me a chance to play my own “create a story” game, which I still enjoy.

Currently, Phantom fans can read the current newspaper strip by the great Tony DePaul with art by Mike Manley (dailies) and Jeff Weigel (Sundays). There are hardcover books reprinting the Phantom strips from the 1936 beginnings of the character and, by the Ghost Who Walks, do I wish I could afford those. There are the occasional new Phantom comics in the United States, though those tend to be uneven in quality. For the truly obsessive, there are Phantom comic books from Australia.

Frew's The Phantom is the longest-running comic-book series with the character in the world and Australia's bestselling comic book. The title is published roughly every three weeks. I’ve been buying it since issue #1100; the most recent issue I’ve received is #1822.  The issues are a delightful mix of American comic strip reprints and new-to-me Phantom adventures from Europe. In addition, Frew publishes three other Phantom titles:

Giantsize Phantom is a standalone quarterly comic book reprinting Frew's other characters from the 1950s as well as The Phantom. I’m tickled by how many of these other heroes are basically the Phantom in different settings and times. The Walkers aren’t the only super-hero family in the game.

Kid Phantom is a quarterly, all-color, glossy comic book aimed at children and featuring original material. I bailed after the second issue because, well, it’s not very good. Keep in mind though yours truly hss a long-standing aversion to comic books about existing teen/adult characters when they were kids. I would make an exception for Superboy, but the rest of that bunch creep me out. Even the revered Little Archie is a little hard for me to take.

Finally, Phantom's World, a standalone quarterly comic book series presenting Phantom adventures from around the world, often seen for the first time in English, as well as original material.

Like most of my Vast Accumulation of Stuff, my copies of the Frew Phantom comics are spread throughout said VAOS. I know there must be hundreds of issues I haven’t read yet. But I am trying to stay relatively current with the newer issues as I get them. And that’s what this recurring bloggy thing feature will be about: my remarks on these newer issues.

The Phantom #1810 has a great new wraparound cover by Shane Foley, whose art also appears in Alter Ego. Shane’s passion for the Phantom is clear and his name will turn up again today.

This issue presents “The Prisoner Who Didn’t Exist” by writer Claes Reimerthi aka Michael Tierres with art by Jaimi Vallve. The story was first published by Semic Press in Scandinavia in 1987. The 32-page story involves one of the current Phantom’s ancestors and the illegitimate son of the first Phantom, an ancestor who never took the Phantom oath. It’s a terrific story which, unfortunately, does not end in this issue. Its continuation appeared in Frew Phantom #1733, published in 2015.

That’s one of the drawbacks of the vast assortment of Phantom tales from around the world. Frew hasn’t always been able to get stories in their proper publication order. I’ll be looking for #1733 when next I go through my boxes of Phantom comics...because I liked this issue a lot. 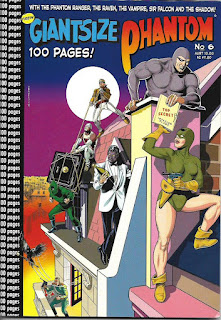 Giantsize Phantom #6 is 100 pages of The Ghost Who Rocks and some of his fellow masked adventurers. The cover is by Glenn Lumsden and the issue comes packaged with a Phantom Universe card spotlighting an intriguing character called Miss Mist.

Leading off the issue is “The Vapors of Vulcan,” an insanely wonky Phantom story drawn by Pat Boyette and likely written by Joe Gill. It’s from The Phantom #47 [Charlton; December 1971].

Other stories and features:

The Raven by Paul Wheelahan. The hero is a unjustly disgraced man “condemned to life beyond the law.” In this story, he works to save the life of an innocent man facing death by hanging.

The Shadow (but not the one you’re thinking of) appears in a all-new story written and drawn by Jeremy Macpherson.

“Heroines with Bite” is a prose article about Australian heroines created by Peter Chapman. From Gem Comics #16, we get a reprint of a Chapman tale starring the Vampire. She was a cool character, but this was her only appearance.

The Phantom Ranger is a western hero who appears in another all-new story written and penciled by Roy Mann with inks by Max Fish. This is a quirky tale wherein the Ranger’s girlfriend puts him in charge of her ranch. The other ranch hands cheer their new boss and don’t seem to even notice that he’s wearing a mask. The story rambles a bit and has a crazy ending (?), but it’s fun.

The prolific Shane Foley contributes a new story of Peter Chapman’s Sir Falcon, who is frequently mistaken for the Phantom. The story of this hero starts in 1420 and continues through the original’s heirs, so you can understand the confusion. I love this character.

The final component of this 100-page wonder is an interview with Graeme Cliffe, author of a history of Australian comics. There is so much to learn about that country’s comics creators and history. I’m going to be looking for that book. 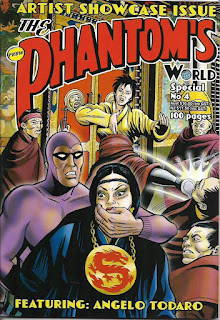 Phantom’s World Special #4 is another 100-page comic book that also comes with a Phantom’s Universe card. This one features Devil, the hero’s trusty wolf sidekick.

This issue puts the spotlight on Italian artist Angelo Todaro with “The Honglong Kidnapping,” a 64-page epic putting the Phantom against a vast criminal organization, and “Shangri-La,” a 22-page story whose title reveals its inspirations. These are entertaining adventures with exceptional art.

The Frew Phantom comics are available directly from the publisher. For more information, go to: www.phantomcomic.com.au
I’ll be back tomorrow with more stuff.

Posted by Tony Isabella at 9:54 AM