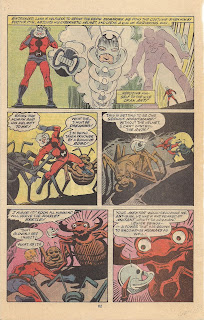 Something I should stress is that there’s no one right way to write
a comic-book story.  Because I was dealing with limited page counts
for these back-up stories, I broke them down on index cards first.
I sometimes do this with longer stories, but not always.

When I was writing Hawkman, there were a few times when I plotted
an issue on index cards, had a conversation with peerless penciler
Richard Howell about the issue, and then sent him the index cards
instead of a formal plot.  Conversely, I never used the index cards
method when writing The Grim Ghost.

Because I had won the confidence of the Atlas crew, I was able to
develop a different method for writing The Grim Ghost.  I’d start
with a rough overview of the plot.  Then I’d block out each issue
scene by scene as I wrote the scenes.  Once I knew what needed to
happen in a scene, I wrote the captions and dialogue for each scene
first and then wrote the panel descriptions around the copy, albeit
cutting copy when necessary.  It got a little crazy for me with the
sixth and final issue of the first story arc - I wrote more than 22
pages and had to kill some of my darlings - but it was an exciting
way to work.  If the characters surprised me along the way, well,
that’s the reaction I wanted from the readers.  Experiencing that
while I wrote was a bonus for me.

Above is the published third page of the Ant-Man story and below is
my index card breakdown for that page: 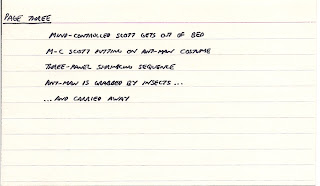 Mind-controlled Scott gets out of bed

Ant-Man is grabbed by insects...

From the plot that was sent to editor Jim Salicrup and then Ditko,
here’s what I wrote for this third page:

PAGE THREE: Three-panel sequence. Scott Lang has donned the Ant-Man
costume between pages.  He releases the shrinking gas from his belt
and shrinks down to the size of an ant as the weird voice commands
him to do.

Ant-Man comes to his senses as he is grabbed by several large
insects.  The weird voice is now commanding the insects.

The insects are carrying Ant-Man along an underground tunnel.  They
have removed his helmet and it’s being carried by a bug ahead of
the rest of them.  Ant-Man is having a hard time believing this is
really happening.

Close-up of the Beetle holding the helmet.  His mutant powers have
developed to the point where he can – with great concentration -
control a human mind temporarily.  The helmet will increase this
power immeasurably once he learns how to use it.  He will rule two
worlds: insect and human.

If you’ve been comparing the plot to Ditko’s pencils, you’ll have
noticed he brings his own storytelling skill to the story.  Working
plot style, the artist should be free to stage scenes his own way.
As long as an artist includes all the necessary visual information,
I’m fine with that.  Working with Ditko, there was never any doubt
the art would show what it needed to show. 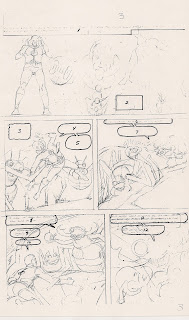 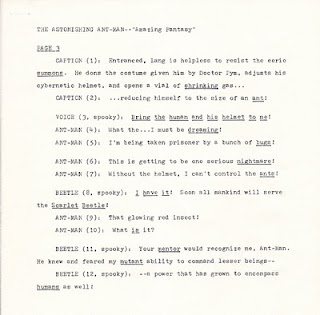 Come back tomorrow for page four.