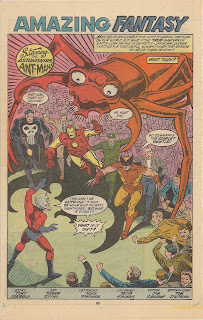 Above is the published first page of the story.  Here is the index
card breakdown for that page: 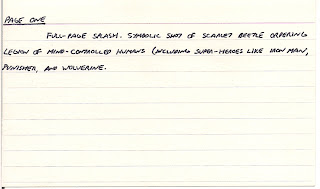 Full-page splash. Symbolic shot of Scarlet Beetle ordering legion
of mind-controlled humans (including super-heroes like Iron Man,
Punisher, and Wolverine.
My plot started out with this note to Ditko:

Hi, Steve. I’ve got to tell you that working on this little story
with you is a real thrill for me.  I’ve designed it like the five-
page snap ending stories you used to do in the monster comics of
the 1960s. I’m going to script it in a style as close to those
stories as possible without going overboard.  Since we are limited
to five pages, I’ll need lots of room for captions and balloons on
these pages.  I’ve tried to plan the visuals accordingly.

IRON MAN, THE PUNISHER, and WOLVERINE (who appear only in the
splash panel as mind-controlled slaves of the villain);

THE SCARLET BEETLE. I’ll save everybody time by copying this
villain’s only two appearances and sending them along.  This is an
incredibly obscure villain.

If you have any questions on this plot, feel free to call me.  I
work from 7 a.m. to 8 p.m., which is when I put my little boy to
bed.  Call any time within those hours.

PAGE ONE: Full-page splash. The title will go at the top of the
page with a burst (STARRING ANT-MAN or something) under it and to
the left.  There’ll be another burst/caption in the lower right
corner.  The scene is a symbolic shot of a huge Scarlet Beetle
ordering a horde of brain-controlled humans (including Iron Man,
the Punisher, and Wolverine) to attack a worried Ant-Man.  Ant-Man
has raised his arms to ward off the blows sure to come when this
horde reaches him.  Credits will run along the bottom of the page. 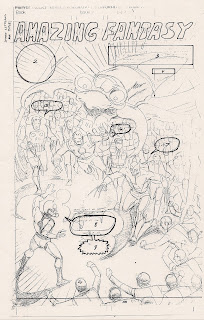 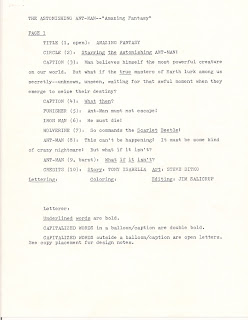 Come back tomorrow for page two.