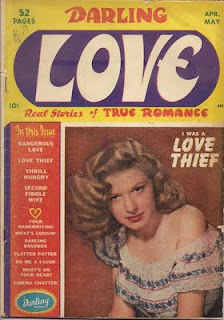 Based on this issue, Darling Love (Archie/Close-Up; April-May 1950)
could have been called He-Man Romances. The male leads are a bunch
of tough guys.  A lumberjack whose passion for his boss’s daughter
enrages his boss.  A married doctor fighting malaria in the jungles
of Manila.  A “sandhog” who loves his boss’s daughter, an engineer
determined to prove herself as tough as any tunnel-digging hunk.
An oil-company engineer whose young wife is struggling to accept
their lonely and sparse life in the oil fields.  It’s a virtual
testosterone fest!

On the issue’s cover is “Imogene Williams, Warner Bros starlet”.
A quick check of her IMDB credits found...no IMDB credits.  Makes
me wonder who she really was.

Darling Love is truly a comics magazine. The inside front cover is
a contents page featuring staff credits. Marie Antoinette Park is
the editor of record with other women listed as executive editor,
story editor, and production manager.  Art Director Milton Sorul is
the title’s art director.

In addition to the four comics stories, there are several shorter
prose features. These are poems, record and movie reviews, a piece
on handwriting, recipes, fashion tips, and that romance comic book
standby, the personal problems advice column.

There isn’t the slightest hint of Archie Comics here.  Though I’m
unable to identify the writers and artists who created these tales,
their work is dramatic with lots of emotion and, when called for,
exciting action.  There are adult themes; the malaria-fighting doc
strays when his nurse puts the moves on him.  If I didn’t know that
Close-Up was an Archie Comics imprint, I would never guess it from
this issue.

Darling Love ran 11 issues.  Darling Romance, its companion comic,
ran seven. I was impressed enough by this issue that I’ll keep an
eye out for any other reasonably-priced comics of these two titles.
I recommend you do the same.