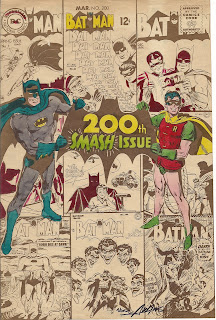 ﻿
I told you about the above piece of art a couple days ago.  At the
time, I described it as the color guide to the Neal Adams cover for
Batman #200 [March 1968].  Given that Neal had signed it, I thought
he had probably done the color guide.  However, just to be sure, I
contacted my pal Anthony Tollin, who was one of DC’s top colorists
and production people for many years.

It's obviously the original hand-colored "silverprint" for the
cover of BATMAN #200, almost certainly colored by Jack Adler.
(Silverprints tended to turn brown with age, due to the acids in
the paper.)

DC colorists colored on silverprints during the 1960s and early
1970s, which were replaced by special matte-finish darkroom
photostats in the early 1970s and later xeroxes.

Since Jack Adler did the cover color separations as well, he
probably did the minimum necessary to show the editor what he was
going to do. The colored silverprint has all the actual coloring
with minimal indication of the 100% Magenta background surprint.
Both are accurate to the finished cover.

Of course, had I colored the cover, I would have gone over all the
background cover art in red colored pencil or tempora paints to
better simulate the magenta surprint, but my cover coloring had to
be sent to Chemical Color in Bridgeport for separations. Since Jack
himself was doing the actual color separations, he didn't need to
complete all this busywork as a guide to himself, so did the
minimum he could get away with. It was staff work, anyway, not
freelance...back when Jack was the on-staff cover color separator.

Not much to look at since Jack didn't have to complete it...but
still an interesting relic from an historic issue.

Tollin followed up with a second e-mail:

It's definitely authentic. A fan doing it would've done a much
neater job, but 1960s DC colorists tended to just indicate when
possible...and not even stay within the lines if they were going to
separate it themselves.

One last thing...I still think it's by Adler, but it could possibly
have been by Sol Harrison considering that it was an important
anniversary cover.

My multiple front war against my Vast Accumulation of Stuff goes on
and on.  The pile of clothes to be donated to a charitable group is
fast approaching four feet in height.

There are over a hundred t-shirts in the pile, some of them comics-
related.  Should I pull them out and offer them on eBay or at some
future garage sale?  Let me know.

The old file cabinet continues to produce wonderful things.  In the
latest batch of folders, I found:

An introduction and two full scripts for a character called "Captain
Galaxy".  One script is 22 pages and the other is 12.  I don’t have
any memory of this science fiction character, but the scripts hail
from the early 1970s and were likely written for a fanzine.  When
I have a bit of free time, I’ll read them over and maybe even share
them with you.

The script package for the Captain Universe story I wrote for Web
of Spider-Man Annual #6 (1990), my second and final collaboration
with Steve Ditko.  Since the toddler hero of the story was based on
my son Eddie, this package is a keeper.  But I’ll likely share it
with you in a future bloggy thing.

Eight pounds of file folders containing mail from 1993 readers of
my “Tony’s Tips!” column in Comics Buyer’s Guide.  I had forgotten
how much mail I used to receive before e-mail became the preferred
method of communication.  It’ll take me a while to go through these
folders - and there seems to be another two years worth of CBG mail
still in the cabinet - so I might not be going back to my old files
for several days.

Who ever thought cleaning could be this much fun?