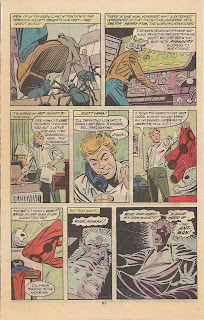 When I mentioned to a friend that I was doing this series of blogs,
he asked me what it was like to work with Steve Ditko.  Honestly,
outside of the solid storytelling and professionalism of Ditko, I
don’t have any impressions of working with this legendary artist.
He never communicated with me, directly or indirectly, nor I with
him.  I plotted this story and a second starring Captain Universe.
He drew them.  I scripted them.

To the best of my knowledge, I only met Ditko once.  It was during
my mercifully brief time as a DC Comics staffer.  Joe Orlando was
discussing Shade the Changing Man with Ditko and, when I walked by
his office, called me in to introduce me to Ditko.  I don’t recall
what I said at the time - probably something about how much I loved
Ditko’s work and had for years - and what Ditko said in response.
He struck me as a quiet guy.

This was before Shade was launched.  Later, whether it was on that
same day or a few weeks afterwards, Orlando gave me photocopies of
the first issue art and some sort of plot/overview of the series.
He asked me to read the material, then let him know what I thought
of it and if I wanted to script it.

What I thought was that this first issue needed a better structure
and story flow, that there was too much I felt would be unclear to
the readers.  Since the deal going in was that Ditko would do all
the plotting and the scripter wouldn’t have any actual input into
the stories, I passed on the scripting gig.  I wanted to write my
stories, not someone else’s.

Above is the published second page of the Ant-Man story and below
is my index card breakdown for that page: 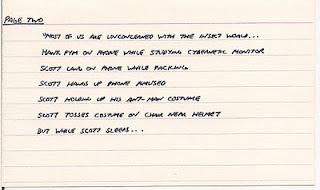 “Most of us are unconcerned with the insect world...

Scott Land on phone while packing

Scott holding up his Ant-Man costume

But while Scott sleeps...

From the plot that was sent to editor Jim Salicrup and then Ditko,
here’s what I wrote for this second page:

PAGE TWO: Insect point-of-view of people walking down a busy street
with various insects on the ground beneath their feet.  Few people
pay any attention to this world below them.

Cut to Doctor Pym staring at a cybernetic wave monitor in his
laboratory.  The monitor is showing weird patterns.  He’s speaking
into a communications headset he wears, talking about strange
signals he’s picking up in the vicinity.

Cut to Scott Lang in his bedroom packing a suitcase while he
listens to Pym (not shown) on a phone held between his titled head
and shoulder.  Pym wants Lang to check for anything unusual in the
insect world.  Lang says he’s getting ready to leave on a business
trip, but he’ll look into it when he gets back.

Scott hangs up the phone amused.  He thinks Pym is just a bit weird
for being so concerned about insect conversations.

Scott holds up his Ant-Man costume.  He’s trying to decide if he
wants to pack it for his trip.

The costume gets tossed on a chair.  Lang’s cybernetic helmet is on
a table next to the chair.  Lang (not seen) will decide when he
finished packing tomorrow.  He’s going to bed now.

Move forward to Scott in bed as a weird voice commands him to rise
and change to Ant-Man.  Lang’s eyes are open, but his mind is being
controlled. 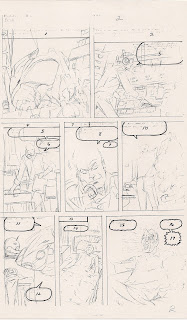 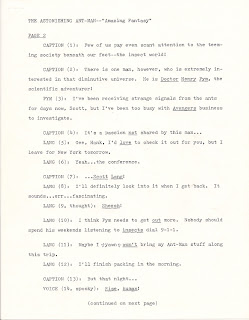 Come back tomorrow for page three.