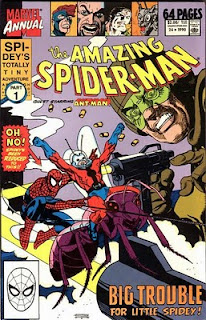 Part One of Six

It wasn’t exactly a lost ark, but the file cabinet in what used to
be my downstairs office hadn’t been opened in a decade and a half.
I’ve just started to explore this five-drawer monstrosity, but one
of the first treasures I found was the complete “script package” to
a story I wrote for Marvel Comics in late 1989.

Earlier that year, I had closed my Cosmic Comics store.  It was the
victim of landlord malice, rising crime by customers and employees
alike, large unpaid invoices for merchandise sold to a non-profit
organization with which I was involved and which never paid for the
goods and, I must admit, a series of unfortunate decisions I made.

I went to work for one of the most despicable individuals I’ve ever
met.  I worked for him for three months, quitting at the end of the
day I confronted him about his sexual harassment of a young woman
working for us on a part-time basis.  She was a rape survivor.  I
arranged her schedule so she could go to the trial of the serial
rapist who had attacked her and several other women.  Her and the
other women wanted to be there every day to show support for each
other.  I made sure her schedule let her do that.

Mister Despicable had been pressing the woman to have sex with him.
When she accompanied him to a convention, he refused to get her a
hotel room of her own.  Fortunately, she had a friend with her own
hotel room.  The woman was in tears when she asked if I could talk
to our boss.  She needed this job, but the strain of the constant
sexual harassment, combined with the trial, was using up all of her
strength.

Mister Despicable was a lawyer, though he has since been stripped
of his license to practice.  He knew what he was doing was sexual
harassment.  I told him he had to stop this behavior.  His clients
included prostitutes and he was already having sex with them.  He
needed to leave our employee alone.

He became enraged, his pig-like eyes shrinking into black dots of
malevolence.  He jabbed his fat finger at me and said:

He stormed out of the store.  I figured he was going to one of his
prostitutes while he planned some new vileness to inflict on our
employee.  Whoever she was, I pitied that luckless prostitute.  My
boss was an evil man who enjoyed abusing women and anyone else he
could.  In that moment, I knew I absolutely could not work even one
more day for him.

I gathered up my personal belongings and wrote a terse letter of
resignation.  I related the above to the employee and recommended
she find another job.  Eventually, she did.  At the end of the day,
I locked the store and tossed my store keys through the mail slot.

I went back once to get my last paycheck and purchase some comics
I had pre-ordered for myself.  The paycheck was a few dollars short
and the new manager refused to honor the employee discount that was
in effect when I ordered the comics.  I took the paycheck and left
the comics behind.

There’s much more to the story of Mister Despicable, but that grim
story is best left for another time.  Telling you even this much of
that period is as much as I can handle right now.

Jim Salicrup was the Spider-Man editor back then.  He was a fan of
my writing and a close friend.  He started hiring me for a variety
of assignments: short stories for his Spider-Man annuals, a handful
of Rocket Racer tales for the mostly-reprint Marvel Tales and even
a three-issue stint on Web of Spider-Man.

Jim Salicrup was my angel, my hero, my savior.  I was a relatively
new father, my son Eddie having been born in June of 1988.  I was
without gainful employment and depressed that I wasn’t contributing
much to our family and household.  I could make a few bucks selling
my own comics and stuff at local comic-book shows, but that usually
meant enduring constant threats from Mister Despicable.  Promoters
soon learned to position us at opposite ends of their events or to
only sell tables to one of us.  For my sanity and lingering sense
of self-worth, I needed something more.

Jim Salicrup came to the rescue. He never made the assignments seem
like charity.  He wanted to work with me and, as it turns out, he
was one of the finest editors I have worked with in my four decades
in comics.  He knew his stuff, he was fun to work with, he made me
feel valuable, and he always played it straight.  Anyone who has a
problem with Jim, well, then they have a problem with me as well.
And you know what a vengeful bastard I can be.

The first assignment was a five-page Ant-Man story - Scott Lang was
in the costume then - to be drawn by Steve Ditko.  I was thrilled.
I pitched a nutty idea to Jim and he okayed it.

The evolution of my Ant-Man story from idea to finished script went
like this:

Using index cards, I broke down the story panel by panel and page
by page.  I have those original index cards.

I wrote a detailed plot for Ditko, keeping the panel descriptions
as brief as possible because...because he was Steve Ditko for God’s
sake!  He probably didn’t need as much description as I gave him.
Anyway, I have the original plot for the story as well.

Ditko pencilled the story.  Photocopies of the pages were mailed to
me for scripting.  I scripted the story and did copy placements on
the photocopies.  I have my original script and reduced photocopies
of my copy placements.  In case you’re wondering, scripting these
Ditko pages was a breeze.  Everything he draw was in service of the
story, which is what you expect from a master storyteller.

Starting tomorrow, I’m going to present this Ant-Man adventure to
you page by page...from index cards to plot to pencils to script,
all the way to the finished story.  It won’t be as much laugh-out-
loud fun as when I pick on Jim Shooter and Dan DiDio, but it will
give you a look at how this “industry veteran” did it back in 1989.