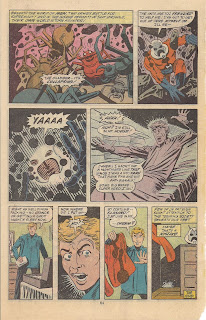 The index cards were a guide to help me stay within the five pages
I had been allotted for this story.  As you’ll see, I ran a couple
panels over.  Which was not a major concern.  I course corrected as
I wrote the finished plot.

Above is the published fifth and final page of this Ant-Man story
and below is my index card breakdown for that page: 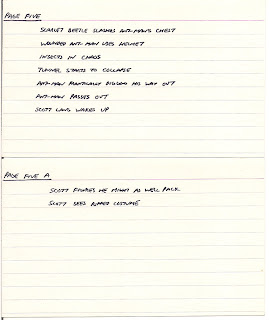 Ant-Man frantically digging his way out

From the plot that was sent to editor Jim Salicrup and then Ditko,
here’s what I wrote for this final page:

PAGE FIVE: The chamber starts to collapse around a screaming Beetle
as he is smothered by the confused and panicked bugs.

Ant-Man is digging his way from the collapsed chamber.  He is
frantic. There isn’t much air left.

Ant-Man passes out.  We can’t tell here if he dug his way out or
not. It’s the suspense that gets me.

Cut to Scott Land waking up with a start in his dark bedroom.  He
hasn’t had a nightmare like that since he was a kid.  He’s glad no
one else is around.  He’d never live it down.

Scott gets out of bed.  He might as well finish packing.  Not much
chance of getting a good night’s sleep now.

Scott turns on the bedroom light and looks surprised.  He has on
his Ant-Man costume and it’s ripped where the Beetle had slashed
him.  But if it wasn’t a dream...

Extreme down shot of a dark corner of Scott’s bedroom.  There is a
glow visible.  It’s the same kind of glow that surrounded the
Scarlet Beetle. Boo! 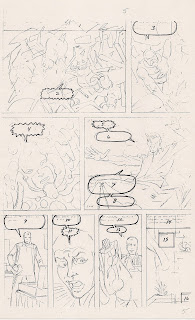 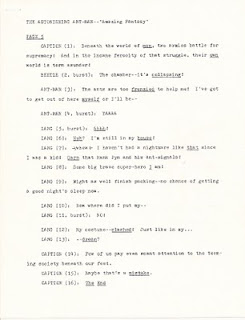 Rereading this story and script package for the first time in many
years, I think it turned out pretty good.  But I can’t believe that
I was able to type “confused and panicked bugs” without giggling.

About the only thing I would change is to have the story lettered
the same way those great “shock ending” stories were lettered back
in the 1960s.  Alas, neither Art Simek or Sam Rosen were still with
us in 1989.

I hope you enjoyed this series.  Come back tomorrow and I’ll give
you a quick update on this and that before heading to the Detroit
FanFare.