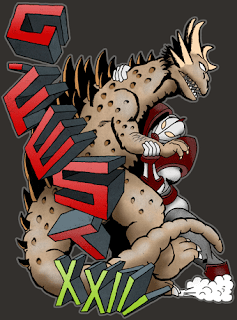 I have attended some really great conventions in recent years and will be attending several more before the end of the year. But I don’t think I’ve been more excited about going to one of those wonderful events than I am about going to G-FEST XXIII this weekend, July 15-17, at the Crowne Plaza Chicago O’Hare. My driver and security for this trip will my son Eddie.

G-FEST is the largest regular gathering of Godzilla and Japanese monster fans in the world. Held each summer, it typically attracts more than 1000 attendees, but has seen a gradual increase in attendance over the past few years. G-FEST 2014 was the most successful convention to date, bringing in about 3000 Japanese science fiction and fantasy film fans!

G-FEST is a family-oriented convention which caters to a wide variety of interests within the kaiju genre. G-FEST features presentations and Q & A sessions by actors and crew from the Japanese Godzilla films, fan presentations on topics of interest, contests and gaming, new and classic kaiju movies, the western world’s largest kaiju-oriented dealers room, and lots of fun and camaraderie.

Our special guest list this year includes the return of some amazing past G-FEST guests, as well as some bright new faces: Actors Akira Takarada and Bin Furuya who both attended G-FEST XIX in 2012; special effects director Yoshikazu Ishii, who last attended in 2006; sculptor/model maker Hiroshi Sagae, returning from 2014; film historian August Ragone; actor Carl Craig, who last attended in 2007; and regular fan-favorite, actor Robert Scott Field, making his 18th appearance! Newcomers are actress Hiroko Sakurai, star of Ultra Q and many other Ultraman series; actress Linda Miller, one of the stars of King Kong Escapes; actor Sojiro Uchino, who had roles in Ultra-Q, Ultraman, and Gamera vs. Viras; and Tony Isabella, 44-year veteran of the comics industry.

The G-FEST double double feature film festival returns this year to the Pickwick Theatre. The Kaiju Eiga Film Fest will consist of Godzilla vs. King Ghidorah and Gamera vs. Viras on Thursday afternoon, with Yongary, Monster from the Deep, and The Green Slime playing on Thursday evening. The Friday and Saturday main features will be King Kong Escapes, and Mega Monster Battle: Ultra Galaxy Legend.

I’ll be giving a talk and slideshow presentation on “Kaiju in the Comics” with Mad Scientist publisher and real-life scientist Martin Arlt. It’s scheduled for Saturday, July 16, 2-3 PM, in Ballroom 1. Here’s the description:

Kaiju in the Comics. We love our giant monsters on the big screen. We love them on the small screen. And we definitely love them in our comic books. Join veteran comic-book writer and historian Tony Isabella for a safari into the kaiju of the comics.

This will be more of a vacation convention than my usual convention gigs. I won’t be behind a table in an artist alley or an vendor’s area. I won’t be doing any official signings. Instead, Eddie and I will be enjoying various panels and screenings, and likely spending way too much money buying Godzilla stuff. However, if you want to get together with me, send me an e-mail before Thursday. I’ll send you my cell phone number.

Note: Eddie and I will only be around for the first couple hours of the convention on Sunday. We got tickets to a Chicago Cubs baseball game for that afternoon and will be starting the drive home after that. But I’ll do my best to accommodate any meeting requests for Friday or Saturday.

Godzilla was my favorite movie monster from the very first time I watched Godzilla, King of the Monsters on Cleveland television in the 1960s. I pitched Marvel Comics on a Godzilla series even before I went to work there in 1972. I’ll devote a future bloggy thing to that story and how I came so close to writing Godzilla for Marvel.

I have seen and own every Godzilla movie ever made in one form or another, and sometimes in multiple versions. I founded Facebook’s First Church of Godzilla. I have a dream Godzilla comics project I want to do. All praise the Great Scaly One who protects us with his fiery atomic love. It can be a tough love, but, you know, the folly of man and all sort of demands that.

I hope to see some of my bloggy readers at G-Fest. For more on the convention, visit the event website.

I have a bunch of other convention and other appearances following G-Fest. I’ll be writing about these in detail as we get closer to them, but, for now, here’s the bare bones list:

If you’re a convention promoter and would like to book me to be a guest at your event, e-mail me. I’ll try to accommodate you.

That’s all for now. I’ll be back tomorrow with another installment of my “July 1963" series. See you then.

Posted by Tony Isabella at 7:26 AM