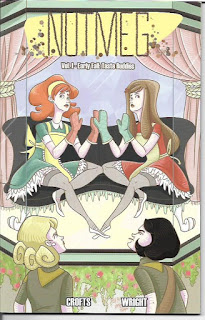 Sunday, June 19. My son Eddie and I were excited for another day of Indy Pop Con 2016, but just as eager to get back on the road for home and the NBA Championship final between the Cleveland Cavaliers and the Golden State Warriors. The convention organizers were cool with our leaving the event early, but the convention center wasn’t going to let us park in the loading dock area before the end of the convention. Fortunately...

Indianapolis has free parking on its city streets on Sunday. Eddie and I checked out of our hotel early, retrieved our car from where we parked it the previous night and found a terrific parking space right across the street from the convention center. My friend and handler Stephan Friedt had already arranged for Pop Con volunteers to help us load our stuff into our car that afternoon.

We had our usual breakfast at the Steak ‘N’ Shake. Donna, that beam of light in human form, gave me a hug when we left the restaurant. If you attend Indy Pop Con (or Gencon) in the future, think about making Steak ‘N’ Shake your breakfast place. You won’t find better food at such a reasonable place anywhere else in the downtown area, and you won’t find anyone nicer than Donna.

We walked back to the convention center. Our plan was for Eddie to take some of our boxes to the car while I set up the table for the 9:00 am opening for the press and the 9:30 opening for the fans who had purchased VIP tickets. That plan hit a bump in the road as we were blocked from entering the exhibit hall by the frankly clueless convention center security guards.

The guards wouldn’t let guests and vendors enter the hall, pointing to the back of the badges that said the show opened at 9:30 for the VIP fans. Apparently, they thought we should enter at the same time as the fans, not considering that we had to set up before the press or the fans entered the hall. They also weren’t willing to listen to our explanation as to why we - and I’m talking about a group of several guests and vendors - needed to enter the hall before 9:30 am. I love dealing with people of little power throwing around that little power simply because they can.

Don’t take this as a slam on Indy Pop Con, one of the best run and most fun conventions in the country. It’s on the convention center and it is typical of many convention centers. It doesn’t have to be that way. For example, it’s not that way at the Columbus Convention Center where we used to hold Mid-Ohio-Con and where we currently have Wizard World Ohio Comic-Con. It’s not the way at the Cleveland Convention Center, home of Wizard World Cleveland Comic-Con. But it’s one of the negative situations - which include a scarcity of clean restrooms and decent dining options - I encounter again and again when I attend other conventions.

An Indy Pop Con representative did get the guests and vendors into the exhibit hall a short time later by opening doors on the other side of the hall and stationing volunteers there to make sure only guests and vendors entered early. Eddie and I consolidated our show stock down to three boxes, which allowed him to put the other boxes into our car before my 10 am panel.

There were 30 panels and other events scheduled for Sunday, as well as some events at the GFUEL ESports Arena. Fourteen fan films would also be shown. My 10 am panel was “Classic Comics,” described thus on the Indy Pop Con website: Join veteran creators Joe Rubenstein and Tony Isabella as they discuss the history of comics.

Actually, the website listed three additional panelists, but early morning panels can be a problem for some guests, especially on the last day of the convention when they are also checking out of their hotels. Before the panel, I predicted just one other panelist would show. I also told Eddie I wouldn’t be surprised if I ended up doing the panel solo. That’s happened in the past. But, trooper that he has always been, Joe Rubenstein showed up for the panel.

We talked for around fifty minutes about comics we loved. Joe told a great story about how, as a kid, he really liked a Superman tale about the Superman of 2965. Years later, inking a Superman story, he suddenly realized he was working on a story starring that same character. How cool was that!

I was too busy listening and talking to take notes about the other classic comic books we talked about. I know I mentioned Cosmo the Merry Martian, a very short-lived Archie Comics titles. I probably mentioned Fantastic Four Annual #1, which, as regular readers of my bloggy thing know, was the comic book that made me want to work in the comics industry. All in all, it was a good panel.

Note to self: Start recording these panels and then hire someone to transcribe them for posterity. 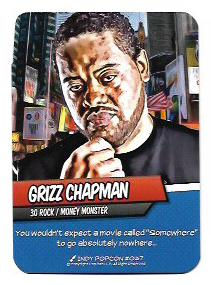 The rest of my Sunday time at Indy Pop Con went by fast. I did get a chance to speak with Grizz Chapman whose work on 30 Rock was so wonderful. Working with just a few lines per episode and playing in scenes with the great Tracy Morgan, Chapman nailed the humor every time. If I ever get the chance to cast actors in something, I will give this very funny man a call. 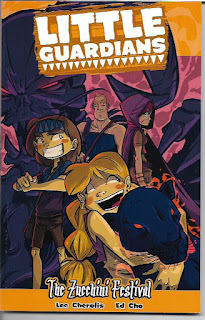 I also did some shopping, picking up the trade paperbacks of Nutmeg by Jackie Crofts and James F. Wright, and Little Guardians by Lee  Cherolis and Ed Cho. Jackie and Lee were on my Friday panel and I wanted to check out their books. All their books are near the top of my “read soon” pile. I should get to them within the next week or two. Despite the abundance of wonderful comics and other things at Indy Pop Con, I managed to restrain myself.

When I was at my table, which was most of the time, I did the usual signing of Isabella-written things, selling Isabella-written comics and other stuff and answering reader questions in what I certainly hope was an entertaining and informative manner. And, then, it was time to hit the road.

Eddie and I made good time getting back to Medina, this despite a traffic jam in which it took us nearly an hour to go twenty miles. We stopped only for gas, a single rest area break, and White Castle hamburgers. When we hit Medina, we were met by our neighbor Greg, who would be going to the Cleveland Cavaliers watch party with my son. Eddie jumped into Greg’s car while I gave Greg the rest of our burgers. They went to Cleveland. I drove home.

Since I think I probably exhausted the patience of my non-sports-loving readers with Monday’s bloggy thing, I won’t write about the exciting basketball game I mostly watched on TV. (There were times when I had to leave the room or when I was ordered from the room.) After the exciting conclusion, Cleveland’s 52-year-curse of never winning a sports championship was over. The Cavaliers had won the 2016 NBA Championship.

The aftermath of the game was as exciting as the game itself. The emotion of the players and the fans was a delight to behold. I was especially pleased that the police made only five arrests following the game. Cleveland proved itself to be a classy town that evening. I hope that continues.

When Eddie and Greg got back to our house, we all had champagne and  freshly-baked chocolate chip cookies. I opened my almost-forgotten Father’s Day presents. It was a good time and none of us was able to fall asleep until it was almost time for us to get up and head for work. What a night!

And what a convention! If you have the opportunity to attend Indy Pop Con 2017, do so. You’ll have a fantastic time.

As for me, if Indy Pop Con invites me back next year, I will most definitely be there. I love that show!

That’s all for today. I’ll be back tomorrow with some thoughts on my upcoming trip to G-Fest, the annual Godzilla event held in Chicago, and information on my convention and other appearances for the rest of the year. See you then!