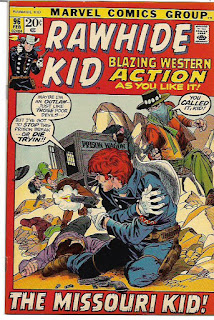 The Rawhide Kid is my favorite western comics character and one of my favorite comics characters period.  Something about the short of stature (but big on courage and fighting skills) Johnny Clay spoke to the short of stature (but big on comics-reading skills) teenage Tony Isabella.  After rereading the Kid’s earliest adventures when Marvel Comics reprinted them in a pair of Marvel Masterworks and an Essential Rawhide Kid volume, I wanted to reacquire every Rawhide Kid comic, reread them and write about them in this bloggy thing of mine. This is the 82nd installment in that series.

The Rawhide Kid #96 [February 1971] has a cover drawn by Gil Kane with Bill Everett inks. Inside the issue, Everett is also the inker of “The Kid from Missouri” by guest writer Gary Friedrich and guest artist Dick Ayers. The 14-page story would be reprinted in Rawhide Kid #148 [November 1978] with a new cover by Gene Colan and inker Joe Rubinstein.

I love this story. I love this story so much that I’m going light on the spoilers to encourage you to track down either this original appearance or the reprint. I think it’s the best Rawhide Kid story  not written by Stan Lee or Larry Lieber

The Rawhide Kid and horse Nightwind are riding along when they come across a prison break in progress. Even though he is a wanted man himself, the Kid knows he has to try to stop it.

Rawhide shoots one of the two outlaws attacking the prison coach, but the other kills both of the guards. The Kid knocks the gunman from his horse with a flying tackle, but the bigger man kicks him (implied) in the groin. The man is preparing to shoot Rawhide dead when a shot rings out and ends his life.

Rawhide’s life was just saved by an elderly prisoner once known as the Missouri Kid. Despite this timely rescue, our Kid plans to turn Old Kid over to the authorities. Just not before Old Kid tells him his story of a young man wronged by a ruthless railroad company and who sought vengeance on same without hurting innocent folks. More I will not say, but it’s a great yarn. I was rooting for Old Kid at this point.

What follows are various humorous actions and exchanges. A lawman who looks suspiciously like the Marvel version of Wyatt Earp - also drawn by Ayers back in the day - gets the drop on them. The lawman is only interested in the Rawhide Kid and, not knowing who Old Kid is, lets him go.

More stuff happens until we get to a very satisfying ending. Like I said, you need to track down this story in the original version or the reprinted version.

Here’s the cover of the reprint: 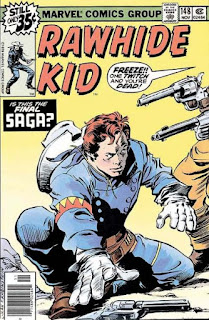 Marvel went to the 1950s for the four-page reprints backing up the main story. “Gunhawk” by Stan Lee and Joe Maneely is from The Ringo Kid Western #15 (December 1956). “Hide-Out” has art by Human Torch creator Carl Burgos and originally appeared in The Outlaw Kid #19 (September 1957). The writer of the Burgos story has not yet been identified.

“Gunhawk” is a gem. It’s set in the lawless frontier town of Nugget Notch. A terrified stranger rides into town shouting that Gunhawk, a lightning-fast gunslinger for the Texas Rangers, is after him for a shooting in another town.

Bull Jones, the outlaw who runs the town, doesn’t want the law in his town. The stranger tells Bull he will need all his men to beat Gunhawk, the fastest gun east of the Rockies, the man who out-drew Frank James and the Wabash Kid. Bull isn’t impressed. He says he’s the fastest gun in these parts with the exception of another outlaw named Sagebrush Harry. That’s when the stranger tells him Sagebrush was buried last week:

The Gunhawk outdrew him afore his hand could touch his colt!

Bull and his men don’t need to hear any more. They decide to move on to other parts, leaving the stranger standing in the street, begging for help. When they run into a grim man riding into town, they rat out the stranger:

We ain’t looking fer trouble, amigo! We’re just leavin’ town. The man yuh want is hidin’ in the hotel! Yuh can have him with out compliments!

The grim man walks into the hotel. The stranger recognizes him and calls him “Gunhawk.” And then, they talk:

STRANGER: Yeah, if we keep chasin’ these owlhoots outa the towns we’re supposed to clean up, our gun-hands are gonna git rusty! We won’t be able to draw if we have to!

GUNHAWK: It’s funny that they’re never smart enuff to doubt your story about me! Oh, well, I guess if they were smarter, they wouldn’t be owlhoots!

STRANGER: That’s right, Tom...and remember, in the next town, it’s my turn to be Gunhawk!

If I were ever asked to edit a volume of the best of the pre-hero Stan Lee stories, this one would definitely be in it.

“Hide-Out” has a tough act to follow and, while it doesn’t rise to the challenge, it’s not a bad little tale. First-time robber Drew gets caught in the act by first-time bank guard Pat. They both fire and they both miss. The fleeing Drew vows vengeance. Pat promises to get him first.

Drew goes into the woods searching for a hide-out. He gets turned away from other outlaw hide-outs who fear the pursuing Pat. Drew’s further adventures in the woods terrify him. When he finally finds a secluded cabin, am equally weary Pat is there. The guard came to the cabin to escape Drew. The finish is fun:

The two enemies, each afraid of the other, swung fists, missed and collapsed...

PAT: Drew, I guess we just ain’t fighters! What d’yuh say we help each other stay alive and get back to civilization?

DREW: It’s the only way we can save our own skins, Pat! And I’ll be happy to go back and face the music!

DREW: Any place...even jail...is better than this hide-out! Alone...I don’t think...I could last it out!

There’s no letters column in this issue, but we do get the return of the “Marvel Bullpen Bulletins. The lead item is about an article on Marvel in the August 1, 1971 issue of the Sunday supplement magazine Parade. That’s followed by an announcement of two new titles: Tomb of Dracula by Gerry Conway and Gene Colan, and Warlock by Roy Thomas, Gil Kane and Dan Adkins.

In other Bullpen news...John Romita, Marie Severin, Herb Trimpe and other Marvel folks took part in an art program for underprivileged kids at the Guggenheim Museum...Stan Lee shaved off his beard...Al Kurzrok, production worker and sometimes writer, went to Haiti for a weekend vacation...Barry Smith, now living in New York City, went back to England for a vacation.

“Stan’s Soapbox” discusses Marvel’s price increase to a quarter for a thicker book, then immediately down to a standard comic at twenty cents. No explanation beyond it being a decision made by the Marvel business people.

“The Mighty Marvel Checklist” lists a dozen new issues. Besides the aforementioned Tomb of Dracula and Warlock, there’s Fantastic Four #119 (the Human Torch and the Thing team up with the Black Panther in what I recall was a pretty good story), Spider-Man #105, Thor #196, Avengers #96 (with “the startling wide-up to the Kree-Skrull war”), Hulk #148, Captain America and the Falcon #146, Sub-Mariner #46, Daredevil #84, Astonishing Tales #10 (Ka-Zar) and Sgt. Fury #95 (reprinting one of that title’s earliest issues by Stan Lee and Jack Kirby).

That’s all for this week’s edition of “Rawhide Kid Wednesday.” I’ll be back tomorrow with more stuff. See you then.