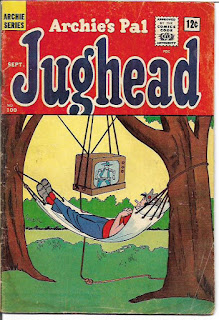 Today’s bloggy thing continues my 136-part series on the comics that hit the newsstands in the month of July 1963. That month was pivotal to my comic-book career because it was the month when Fantastic Four Annual #1 ignited my desire to write comics.

Archie's Pal Jughead #100 [September 1963] was the special 100th-issue celebration of the title. There were multiple variant covers, including a take-off of George Perez’s classic Superman holding the dead Supergirl cover. That was quite astonishing, since Crisis on Infinite Earths #7 would not actually be published for another 25 years.

Archie's Pal Jughead #100 has no mention of the milestone anywhere on the cover or inside the book. The cover is by the terrific Samm Schwartz. It’s a silent gag that’s perfect for Jughead.

The inside front cover is the we’ve-seen-this-before advertisement from Dean Studios offering various come-ons, including a miniature monkey. The issue’s other paid ads are for battle games, Popsicles, bike tires, sea-shrimp, toy soldiers, Daisy B-B guns, bike brakes and the ever-present “earn money and prizes by selling our cheap-ass greeting cards.” We shall speak of these no more.

“Take Two” (6 pages) finds Jughead at the beach with water skies, performing unintentionally for Veronica’s new movie camera.  While the writer of this story has not yet been identified, the Schwartz art is obvious and outstanding. Of all the great Archie artists, I don’t think any top Schwartz for hilarious action and body language thereof. For your amusement and edification, here’s the last page of this story: 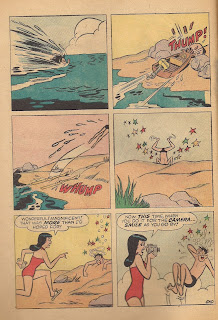 “Who Laughs Last” (6 pages) is a Frank Doyle-written delight with Schwartz art. Archie and Reggie, mightily annoyed by their friend’s “moldy old jokes,” decided to turn the tables on Jughead. It does not go well for them.

Sidebar. Doyle is my all-time favorite Archie writer. His dialogue is always clever and in character, but his pacing is like that of a wonderfully told joke. He build to his script’s always satisfying payoffs. I don’t just enjoy his work. I study it.

Next is a full-page house ad for Archie Giant Series Magazine #24: The World of Jughead. It’s a world of laughs!

“Watch the Birdie” (5 pages) is one of those rare stories in which Jughead does not come out on top. Jughead thinks he and Archie are in the woods to do some bird-watching. Archie is more interested in watching Betty and Veronica, who have come there to get away from men. But when the guys turn to leave, Betty says: Actually, we’ve been away from men for over an hour.

Veronica adds: How much solitude can a girl take?

Disgusted, Jughead leaves the trio to continue his bird-watching. Which turns out to be a bit more difficult than he had anticipated. The Schwartz-drawn story ends with a funny two-page sequence that I now share with you: 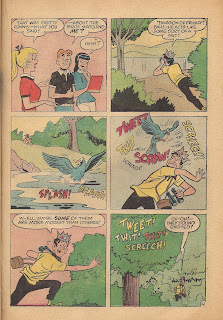 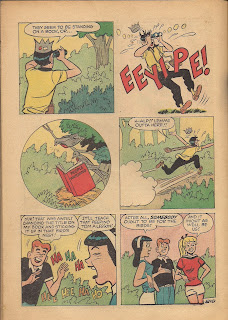 “Archie Club News” (2 pages) is 75% submissions from club members and 25% house ad to join the Archie Club. Members win cash prizes if their submissions are published.

Gary Pollack of South Euclid, Ohio won five bucks for five jokes. The best is this one:

A sweet old lady asked a clerk at the post office to weigh her package for her because she was afraid she hadn’t put enough stamps on it.

The clerk weighed the package and said, “You’ve put too much postage on it.”

“Open and Shut Case” (5 pages) by Doyle and Schwartz is the final story in the issue. Reggie tries to talk Jughead into walking with his eyes opened instead of half-closed. Jughead tries it, but his eyes have trouble adjusting to the sunlight. The experience ends up being too painful for both Jughead and Reggie. It’s a great Doyle script and great physical Schwartz artwork. Here’s a page from this story: 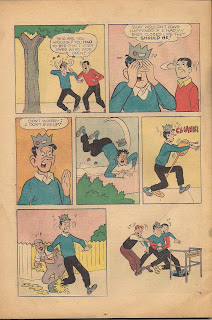 That wraps another July 1963 bloggy. I hope you enjoy reading them as much as I enjoy tracking down and reading these vintage comics. I’ll be back with another installment in the near future.

Tomorrow? It’s blazing western action as you like it when “Rawhide Kid Wednesday” returns with “Renegades of the Wild North!”

This weekend? My son Eddie and I will be attending G-Fest, the big Godzilla convention, in Chicago.

Posted by Tony Isabella at 7:31 AM