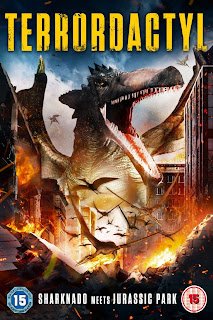 I’ll be talking about three cheesy monster/sci-fi movies today and, yes, there will be SPOILERS AHEAD. I’ll give the title of each film before my review of same, which will allow you to decide if you’re okay with reading spoilers for that movie.

From IMDb: When ancient flying reptiles attack Los Angeles, it's up to two working-class friends, the unlikeliest of heroes, to save the day.

Written by Don Bitters III, directed by Bitters and  Geoff Reisner, this is 95 minutes of solid “B” fun. Neither gentleman has much of a full-length film resume, which amazed me because this movie had it together from the get-go.

Pterodactyls - as in a whole lot of them - have apparently been in self-imposed exile in space, which stretches my willing suspension of disbelief more than I would like. The creatures return to our world in meteors and we get our first look at them very early on in the movie. The CGI is strong within them.

Landscapers Lars and Jonas are likeable, middle-class heroes just trying to get by. When they learn from brainy and feisty bartender Valerie that meteors are worth big bucks, they drive off in search of them. They find one, not realizing it holds a baby pterodactyl.The adult creatures do know this and they follow our guys back to the city and Valerie’s apartment. Before long, the city itself is under attack. Lars, Jonas, Valerie and Valerie’s “sultry” roommate head to the warehouse of a crazy ex-Marine name of Sampson who, of course, as all kinds of firepower at his equipment as well as some contacts within the military.

The movie maintains a sense of danger from the start to a thrilling finish that only borrows a little bit from the big finishes of Syfy Channel flicks Sand Serpents, Sand Sharks and Sharknado. The acting was pretty good with Jack E. Curenton’s Sampson being the scene-stealing star of the picture.

The additional scenes after the conclusion of the battle with the pterodactyls were also fun. One showed what happened to our heroes after the creatures were defeated. The other seemed designed to set up a sequel. I like the first better than the second because this movie seems complete unto itself to me. I see no pressing need for another movie.

I watched Terrordactyl on Amazon Video. As near as I can ascertain, the only DVD release of the movie was in Australia and not playable  on Region 1 DVD devices. As I have an all regions player, that is not normally a problem for me. The high price of getting the movie from Australia was another matter. While there are reportedly plans for a DVD release in the United States, no date has been announced at this time. If and when that DVD becomes available, I’ll probably add it to my home movie library.

On a scale of zero to five, I award Terrordactyl three-and-a-half Rodans. Definitely worth watching if you’re a fan of cheesy monster movies. Like me. 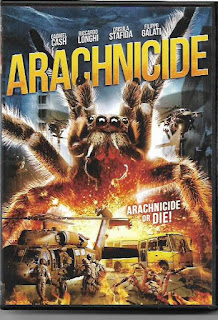 You don’t even see so much as a spider web until a full 49 minutes into Arachnicide, an Italian made-for-television movie that brings shame to the land of my ancestors. The running time of the movie is 91 minutes. You see some small spiders at the 52:30 mark, a glowing growing spider at the 53:30 mark, giant spider silhouettes on the wall at 58 minutes and the first full-blown giant spider attack at the hour mark.

After years of experimenting, a researcher succeeds in creating an incubator that accelerates plant and animal growth. The technology is controlled by a powerful criminal organization and is being used to accelerate the growth of plants needed for manufacturing of illegal drugs and narcotics. To destroy the laboratories they operate, the United Nations organizes an elite team of operatives known as the L9 Commandos.

The L9 Commandos are a task force composed of six of the best soldiers from different Special Forces Units. After successfully taking down the drug operation, the L9 Commandos are called on for an important mission in Albania. There, they discover that the incubator has created a group of colossal spiders.

Even as an “elite commando” movie, Arachnicide drags. The dubbing is awful, but I suspect the original acting wasn’t any better. The only line of dialogue that even made me smile slightly was said by the end of the unit in reference to his ex-girlfriend scientist:

Don’t mind her. She’s just a scientist.
Later, the same guy reminds his team that they are not in a science fiction movie. I think it’s more of an endurance test.

Things get a slight bit more fun when the giant spiders come out to play, even though the film shows the same giant spiders being shot over and over again. In one scene, I lost count of how many times I’d seen a shot after six times.

The spider-infested warehouse was a trap set by the drug cartels. You can see this and nearly every other “twist” in the film coming a mile away because the filmmakers keep badly foreshadowing them. The first deaths come after the hour mark. Most every member of the unit is dead by the time the warehouse is blowed up, an act which releases the spiders into the outside world. Don’t ask me how the spiders were able to spin spider webs all over that outside world in mere minutes after their escape.

The one interesting part of the film comes when the unit commander and his ex are surrounded by giant spiders, who conveniently die of old age. The same process that accelerated the spider-growth also accelerated their aging. A few grenades finish off the rest of the spiders. The final girls - the commander and the scientist - smile longingly at each other.

The final scene? The government bringing some of the spiders into a research facility. Because what ill could possibly come of that?

This movie is available on DVD, but I don’t recommend it. I’m not sure I’d even recommend watching it on TV. If it ever shows up on TV in this country.

On a scale of zero to five Big-Ass Spiders, I give Arachnicide one butt-cheek. 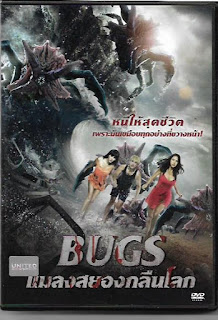 Wikipedia says “Bugs is a 2014 Chinese 3D science fiction disaster thriller film” and little else. I didn’t even know about this movie until I saw it on the list of a eBay seller from Thailand from whom I’ve bought several DVDs. Which I can watch on account of the all-region DVD player I mentioned earlier. Since the audio choices are Chinese or Thai, I had to go with the English subtitles.

A scientist is experimenting with making bugs grow or multiple or some such. A questionable plot teaser I found online claims Bugs is set in the future at a time when food is becoming scarce, alleging the scientist is working to grow bugs as a source of protein. But nothing else in the movie indicates either a future setting or the scarcity of food.

The scientist seems to be the only person on the ship where he is conducting his experiments. The bugs get loose and tunnel into his skin, reducing him to a desiccated corpse in seconds. Millions of the tiny maggot-like creatures flow over the side of the ship and read for a beachfront resort where the publisher of a Playboy-type magazine is holding a competition to find his next centerfolds or some such.

Bugs is a mostly entertaining film. It’s got some great characters, including a photographer, his assistant, his agent, the publisher, a sexy architect who used to date the photographer, her scientist father and a gang of thieves who rob hotel rooms while the guests are doing their party thing. One of the thieves shows courage when you least expect it. Overall, the acting is pretty good.

There are some terrific scares and thrills in this movie when those bugs swarm the beach and the hotel. The playboy and the architect miss that action because they are on the former’s yacht, spotting and getting ready to board the bug ship.

Scientist dad figures out the bugs feed, stop feeding when they’re full and head back to their queen to be consumed by her. So they head for the abandoned ship as well.

The ship scenes are exciting, especially when the queen makes her frightening presence known. The only moments of the film that don’t work for me are a cartoon-ish bit near the end of the movie and one of those tired “gotcha” scenes at the very end. That cliche is long overdue for retirement.

Some other intriguing things about this movie. It’s circumspect in its use of gore and nudity. When a character is bitten in half by the bug queen and looks down to see that most of him isn’t there, the audience doesn’t get to see it. Most American films would have totally gone for that image.

As for nudity, there isn’t any. Not even an exposed breast. That’s kind of odd given the centerfold models. Apparently, standards for movies, even cheesy monster movies, are different in China. Which I’m absolutely good with.

Bugs is deserving of a decent English-language release. Maybe even an airing on The Syfy Channel. If you do get a chance to see this movie, even with sub-titles, I recommend you do so.

On a scale of zero to five giant insects, I give Bugs a solid three  “Them!” ants.

I’m off to G-Fest in Chicago for the weekend, but I’ll be back on Monday with more stuff.