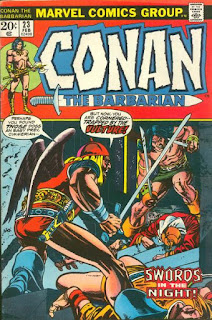 In going through my files, I have started coming across a variety of pitches I sent to publishers over the years. Some date back to before I start working in comics professionally.

I thought my bloggy readers might enjoy seeing these concepts that didn’t go further than my original pitches. Since “never say never” is a mantra of mine, I won’t entirely rule out by revisiting them in the future, but, for now, I have no plans for them.

That’s probably a good thing in the case of today’s first attempt. Near as I can figure, this story synopsis is from 1971 or 1972. I had been corresponding with and chatting on the phone with Roy Thomas. At the time, I was working for the Cleveland Plain Dealer as a copy assistant who very occasionally wrote something for the newspaper. Roy invited me to pitch a Conan plot, which, if it met his liking, he would buy and then script.

I was neither a Conan expert nor a big fan of sword-and-sorcery. I had read the Conan paperbacks published by Lancer. I had enjoyed a few of Fritz Leiber’s Fafhrd and the Gray Mouser stories. I was a big fan of Roy’s Conan comic books.

I give you the Conan story I moronically called...

THE RIDER OF THE PURPLE SAGE

A flash of mortal lightning crosses the Hyborean plains, some hell-bound warrior off to meet his destiny. Dressed in the silver and silk and gold of far Hyrkania, the rider pushes his whimpering mount beyond its endurance. Yet it continues. The rider seems to be unfeeling, as if he had no soul. And, indeed, he does not!

What is friendship in the barbaric era between the sinking of fables Atlantis and the dawning of recorded history? The man that wields a strong sword and does not run it through you when the act would benefit him is, indeed, a friend. And also a fool.

But even a fool deserves proper honors on his death. And the Cimmerian youth Conan has paused in his travels along the Hyborean  highways to pay his late Gunderman companion his due respects. In the inn of Balik along the Road of Kings, Conan quaffs his ale and feasts on roasted pig, giving proper respect to Nestor even as his memory floats away.

Conan’s gluttony angers a Kothian thief who, no doubt, covets the barbarian’s rich purse, the gift of a grateful Corinthian aristocrat. Though unsure whether he fights one foe or many - Conan is not used to strong Hyborean brew - the young barbarian thinks he must teach these civilized dogs proper respect for the dead and for fine Brythunian steel.

Conan rises from his table and stares through the clouded ale he has been drinking. His foe and all the other customers of this inn, as well as the inhabitants, are unmoving as statues. A curse escapes from Conan’s lips as a devilishly cold breeze barely lands on his broad shoulders. He turns...

A man stands before Conan. He is elderly, but the man’s form leaves no doubt as the power of those old limbs. He is garbed in the finest silk, embroidered with ancient symbols. The man has but to glance at Conan’s arm and Conan finds himself lowering that fine sword of his.

The newcomer is a wizard from far-off Khitai. That Conan can grasp through his intoxicated stupor. The wizard wishes to hire the young Cimmerian for a single mission and he offers a bag of gold besides which Conan’s own pales into nothingness. Conan, confused by that fine beverage of Balak’s and tempted by the wealth that the wizard offers, forgets his natural aversion to sorcerers and accepts. As he does so, he is struck by strange images. The wizard’s voice is forming these images into a tale of sorcery and of doom.

In far-off Khitai, two powerful wizards live. Unlike wizards elsewhere, they do not battle for each other’s lands. The wizards, Philcon and Marcon, are father and son. They are content to exist in this world without exercising their great powers except to provide for themselves and occasionally aid a mortal towards a well-deserved prize or an equally deserved doom. They have existed for longer than either of them can remember.

But Philcon feels the weight of the ages creeping up on a mortal frame that should have broken centuries ago. He does not fear death, but can not bear for life to go on without him. Perhaps he has been driven mad by the weight that crushes him, but he has put into operation a plan to doom the world in the near future.

Philcon has exacted a frightening payment for past favors from a young Hyrkanian noble. He has intertwined their souls and given the young man a fearsome mission. Placed on a beast that will not stop galloping until the mission of completed, the young Hyrkanian sets off for the Western Sea. When he reaches that world-spanning body of water, he will pour a mystic potion into it.

The wizard’s story concludes with a final image of the purple sunset over the Hyborean plains and the grim rider who speeds ever closer to the Western Sea.

Conan, a simple man, can not understand this talk of destruction coming from an ocean he has never seen. He can not quite get the notion of men living hundreds of years into his skull. But he can understand the gold that the wizard offers him. For such gold, he could kill a thousand men. The wizard asks that he but stop one man. Conan agrees.

The inn fades from view. Conan finds himself on his own strange steed and with the bag of wealth tied around his belt. He notices, somewhat incredulously, that he is traveling the same plain that the rider was crossing in the visions Marcon showed him. And, lifting his eyes, he sees the rider about a thousand yards ahead of him.

The race. Conan’s mount travels faster the Cimmerian is willing to accept as possible. Conan notes in passing that he can no longer feel the effects of the large quantities of alcohol he’d consumed, but dismisses it almost immediately to concentrate on the problem at hand. Any wizard worth his salt can cure a hangover. The problem at had seems much more serious. Conan is hard pressed to catch up with the rider of Philcon.

Spotting a fork in the road and remembering that it will gain him precious time when it again intersects the plain, Conan pushes his mount down it. When he emerges, he is racing neck and neck with the rider of Philcon. There is no way for Conan to half the other horse. Taking a moment to gauge the distance, Conan leaps off his horse, taking the young Hyrkanian to the ground with him. The rider and Conan both jump to their feet almost immediately, hands on their sword hilts.

The young Hyrkanian looks at Conan in puzzlement. Then, as powerful Philcon correctly assesses the situation, the young noble grasps his sword to kill the barbarian. The sword of Conan is also quick to enter the fray. The Cimmerian does not want to kill this young man, but the battle has come down to a basic point. One of them is to die if the other is to live. Conan, his mind his own, quickly gains the advantage and deals the Hyrkanian a mortal blow.

The Hyrkanian lies slumped against a tree and whispers a single name - Noree - into the wind before life departs.

From his own castle in Khitai, Marcon looks upon all this and shrugs his shoulders. His father was dead and that was indeed the major tragedy of this episode. The young Hyrkanian was also to be mourned, but such was the fate of all mortals. As for Conan...

Conan has saved the future, though he did not know it. As he would have never saved the future without Marcon's help - and Marcon notes Conan would have a particularly bright future - the wizard decides he deserves the gold more than the barbarian.

Surveying the scene, Conan grunts and feels for the wealth he had tied around his waist. It was gone. He cursed. He should have known better than to trust a wizard. The Cimmerian decides to rummage through his foe’s possession for something saleable. All he finds is a small vial of some liquid. He sniffs at the vial and finds it noxious stuff indeed. Cursing again, he hurls it at a tree. And his heart freezes.

For the minute the liquid had touched the tree, the tree withered and decayed.

******************************
Having retyped the above for today’s bloggy thing, I find I like it more than I remembered. Oh, it still has some pretty dumb stuff in it - like the names of the wizards - but it also has a couple of interesting moments and visuals. Maybe I will do something with it someday. What do you think?

That’s all for today. I’ll be back tomorrow with more stuff. Most likely some reviews. See you then.

Posted by Tony Isabella at 8:05 PM