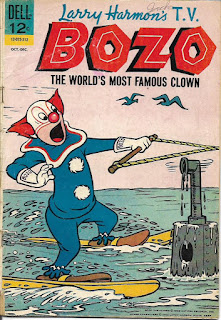 Fantastic Four Annual #1 hit the newsstands in July, 1963. It was that extraordinary issue that inspired me to want to write comic books as my career. In honor of that pivotal moment in my life, I’m collecting, reading and writing about every one of the 136 issues released in that month. My first twenty columns in this series are available in July 1963: A Pivotal Month in the Comic-Book Life of Tony Isabella Volume One [Pulp Hero Press; $17.95]. The trade paperback contains revised versions of the columns that appeared in this bloggy thing of mine as well additional material giving readers a glimpse into the world of 1963. My quest continues...

Bozo the Clown #4 [October-December 1963] came from Dell Publishing after that company split from Western Publishing. Western kept the bulk of the licensed features and continued publishing them as Gold Key Comics. Dell acquired some licenses, but also published a great many original titles such as Brain Boy and Kona. The cover artist of this issue has not yet been identified.

Some background from Wikipedia:

Bozo the Clown is a fictional clown, created and introduced in the United States in 1946, and to television in 1949, whose broad popularity peaked locally in the 1960s as a result of widespread franchising in early television.

Bozo was created by Alan Livingston and portrayed by Pinto Colvig for a kids’ storytelling record album and illustrative read-along book set in 1946. The character became popular during the 1940's and served as the mascot for Capitol Records.

Harmon, one of several regional Bozo performers, formed a company and bought the licensing rights (excluding the records). His name become synonymous with Bozo; that’s why his name appears above the logo of this comic. Capitol Records held the copyright on Bozo with other characters copyrighted by Larry Harmon Pictures.

Bozo’s previous comics appearances were all from Dell. Five issues of the publisher’s long-running Four Color series. A couple issues of his own title in 1951 and four more in 1952.

Bozo the Clown #4 was the final issue of this 1963 run. The writers of these stories haven’t been identified. As for the artists, the Grand Comics Database speculates this issue was drawn (pencils and inks) by the prolific Tony Tallerico. I have no guess of my own here, but will note that Tallerico often hired other artists to pencil comics for him. He didn’t always credit these artists.

The inside front cover is a single-page gag strip. Bozo can’t hit the target at a carnival shooting gallery. Then he comes back and gets a bullseye with every shot because he uses his “four-barreled never-fail-to-pop-a-quail Bozo gun attachment!” Then Bozo laughs. Probably the only one.

In “High Noon Balloon” (8 pages), the circus train is struggling to get to the next town to get the permit it needs to set up in said town. Spy-Guy Bly, who looks like a miniature version of legendary gangster actor Edward G. Robinson, is determined to stop them so he can buy the circus cheap. When the villain causes the train to jump the tracks, Bozo uses the circus balloon to fly to the town.

When Bly fails to shoot the balloon down with a remote-controlled plane, he tricks the army into thinking the balloon is an invading enemy. The military shoots the balloon down, but Bozo uses what’s left of the balloon as a glider to get to town on time. One of the balloon’s sandbags clobbers Bly, who is subsequently arrested for trespassing on the base and as a possible enemy agent. 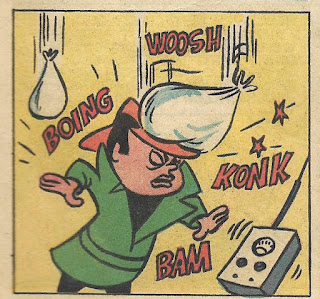 Kids...don’t try this at home. In real life, Bly’s skull would have been crushed by the sandbag. If he somehow survived, he would spend the rest of his days in the Guantanamo Bay detention camp.

Also...clowns are not your friends.

“Splish-Splash Ka-rash” is three pages of skydiver Grando the Great playing tricks on Bozo. While Bozo washes an elephant named Irving, Grando switches the water to cold. The clown narrowly missed being crushed. Then Grando tricks Irving into inhaling sneezing powder. Bozo goes airborne when Irving sneezes. Grando nails Bozo’s shoes to the floor and uses him for a punching bag.

The last laugh is on Grando as he prepares to dive 150 feet into a mere five gallons of water. Except the thirsty Irving drinks it as Grando plummets to his death. Klank!

Okay, the comic doesn’t explicitly state Grando dies, but there’s no scene of him leaving the water barrel alive. I’m going to assume Grando died because, really, he was a jerk.

Also...clowns can get an elephant to kill you.

“Battling Bluzard” (8 pages) finds Bozo and Belinda, a precocious young girl, trying to capture a “bluzard,” a rare bird said to be a cross between a blue bird and a buzzard. The circus is in need of a new attraction. Attempting to beat them to the bird and not above murdering Bozo to do it, Kookie Koyote sets all sort of traps for the clown.

Bozo manages to stay alive and reach the top of Pancake Plateau, which is where the bluzard lives. But, when he sees the bird diving towards Belinda, Bozo loses his focus enough for Kookie to send him over the edge of the plateau. Kookie ends up trapped in the cage he had set up for the bird.

Bozo cheats death once again, this time by using the bluzard’s nest as a parachute. When he gets to the ground, Belinda has tamed the bluzard with lollypops. As long as they give the bird sweet treats, it’s willing to join the circus. 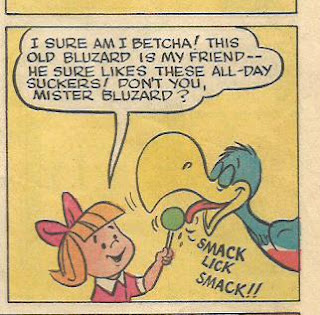 Also...don’t go out into the desert with clowns.

In “The Bombastic Plastic Man” (8 pages), Bozo pays a visit to the secret laboratory of the Professor, a friend of his. The scientist has created a plastic suit that’s impossible to penetrate. With the clown wearing the suit, the Professor fires a gun at Bozo. The suit protects Bozo for harm.

The secret laboratory has a not-so-secret window. Looking into the place, criminals Short Biggy and Big Shorty witness the experiment. They break into the lab and steal two of the plastic suits. Chased by Bozo and the professor, still wearing the suits, the crooks take refuge in a studio filming a science-fiction movie.

Bad luck for the size-defined crooks. The studio lights melt their plastic suits, sticking them to a bridge on the movie set. The real actors are so upset they kick the two off the bridge. Shoeless, the now-barefoot duo are falling toward what appears to be futuristic-looking razor-sharp foliage. Bozo laughs.

Also...clowns will laugh at you being slashed to ribbons.

“Waldo’s Magic Space Bike” (1 page) is a prose story. A kid enters a cross country bicycle race with his old bike. Along the way, he meets a lost little green man. Waldo helps the alien find where he wants to go and offers him a life. The alien makes it possible for the bike to fly, albeit temporarily. The kid takes the alien where he wanted to go. His bike flies just long enough for him to win the race. The citizens chalk up the reports of a flying saucer to the summer heat.

Also...aliens who can make your bike fly are still a whole lot less terrifying than clowns.

To qualify for second class mailing privileges and make more money from subscriptions, Bozo the Clown and other comics had to carry a feature unrelated to the title feature. In this issue, that feature was Wacko Wolf.

I don’t know much about Wacko. He was an animated character created (or, at least, owned) by Larry Harmon. Though drawn as some sort of western desperado, and sporting an occasional western-style speech pattern, in this issue’s “Wacko's Wacky Bowling Ball” (4 pages), he seems to be a cross between a con man and an inventor. 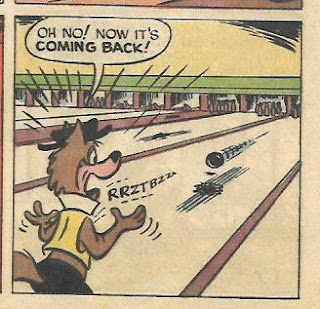 Wacko invents a magnetic bowling ball, which he can use to become a world champion. The ball is a wonder, until interference from the bowling alley owner causes it to go out of control. It chases our lupine grafter into the street. The ball bowls over some innocent bystanders. Wacko ends up in a gutter while the ball lands on his head and his foot. The hilarious punch line is:

Also...you can suffer head trauma and disablement just from being in the same comic book as a clown.

You might have the impression I don’t think much of this Bozo comic book. You are correct. I never liked Bozo on TV, so I never read a Bozo comic book until now. And now I know I don’t like Bozo comics either. But I really don’t like the franchised Bozo who was on TV when I was a lad in Cleveland.

True tale. My Cub Scouts troop, which was based out of Sts. Phillip and James church/elementary school, was brought to what I remember was a live presentation of the Bozo show. We weren’t the only kids at the presentation.

There was a competition during the show. We were all given balloons and the object was to blow them up until they burst, thus risking eye and other injuries.

Members of my Cub Scouts troop, good Catholic boys, tried to cheat to win the competition. They blew up the balloons just big enough that they could put them between their knees and pop them. This did not amuse Bozo.

Bozo pulled out a knife and cut off the hands of the cheaters. No, wait, that was the nightmare I had that night. Instead, on live TV, Bozo chastised our troop for cheating.

How embarrassing is it to be chastised by a clown?

I stuck with the troop through the Cub Scouts years and joined the church/school Boy Scouts troop.  I quit within six months. Because, with little adult supervision, the school bullies pretty much ruled the troop. Now they were bullies in uniform. No thanks.

In later years, I hired my own clown to hunt them all down and kill them. The last thing they saw as they lay on the ground gasping out their last breath were the big red shoes. 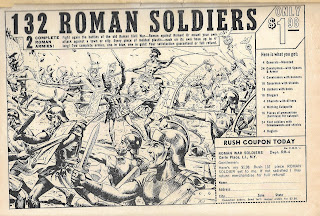 The inside back cover of the issue is the famous 132 Roman Soldiers advertisement drawn by Russ Heath. For only $1.98, you received:  4 generals mounted, 24 cavalrymen with spears and armor, 4  cavalrymen with banners, 16 spearmen with shields, 16 archers with bows, 16 slingers, 4 chariots with drivers, 4 working catapults, 16 pieces of ammunition (harmless) for catapults, 24 foot soldiers with broadswords and shields and 4 buglers. These were made from molded plastic and came with their own bases.

The back cover ad was Wallace Brown’s usual pitch for suckers, ah, I mean, entrepreneurs to sell the outfit’s name-imprinted, personal  Christmas cards. You could earn between $50 and $200 in your spare time. No, really, would they lie to you? Go ahead, just pull Bozo’s finger.

Clowns. Why did it have to be clowns?

I’ll have another “July 1963" column for you in the near future. In the meantime, come back tomorrow for other stuff.