SATURDAY MORNING WITH THE MONSTER MOVIES 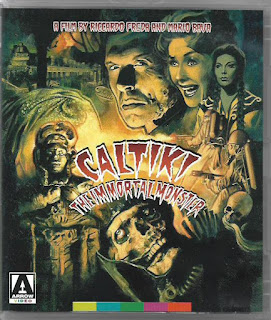 Monster movies are my second love after comic books. It’s been some time since I last reviewed any of them. Please note my definition of “monster movies” is inclusive of movies that feature aliens and dinosaurs and serial killers and, to be honest, anything I say is a monster movie. I am vast.

Caution. There will be some spoilers ahead. 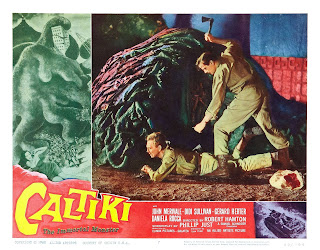 Caltiki, the Immortal Monster [1959] was a youthful favorite back when practically my only source for such movies was watching them on the Ghoulardi show. Late at night, hunched close to the family black-and-white television, I watched Ernie Anderson introduce and sometimes interrupt these movies with his hilarious skits. I believe watching these movies are why I wear glasses and, by the way, it was totally worth it. Here’s the Internet Movie Database summary:

Archaeologists investigating Mayan ruins come across a blob-like monster. They manage to destroy it with fire, but keep a sample. Meanwhile, a comet is due to pass close to the Earth - the same comet passed near the Earth at the time the Mayan civilization mysteriously collapsed. Coincidence?

Caltiki had a major impact on me as a kid, so much so that, years later, I could have sworn there was a scene in it that was a heck of a lot more gory than in reality. I recalled a scene where one of the characters stuck his hand in the titular monster and, when he pulled it out, there was nothing left but a skeletal hand. That sort of happens, but it’s not as graphic as my childhood memory of the scene.

This Italian-made movie was directed by Riccardo Freda and Mario Bava and written by Filippo Sanjust. It starred John Merivale as Professor John Fielding, Didi Sullivan as his wife Ellen, Gérard Herter as the luckless guy who loses his hand and his mind to the blob-monster and Daniela Rocca as Herter’s kept woman. Rocca gives the best performance of the film as a smouldering woman who is torn between her dependence on Herter and her sense of right and wrong.

Seeing this movie again as an adult, I found it even better than I remembered. Though the monster - made from tripe and often lost in the black-and-white photography - isn’t as cool as the one in The Blob [1958], it’s effectively terrifying. When the original monster gets destroyed in the ruins, the typically thoughtless scientist remove and preserve the remnant that ate Herter’s hand. The hero takes it home. Big mistake.

When the old comet comes around again, the specimen in Fielding’s home laboratory starts to grow and grow and grow. At the same time, Herter has escaped from the hospital to go on a killing spree. He is as scary as Caltiki. The movie finishes with thrilling scenes of Fielding trying to rescue his wife and child, and a pitched battle between the monster and the police. The cops have flame-throwers, which doesn’t bode well for Casa Fielding.

From one of the reviews on the movie’s IMDb page:

Lamberto Bava, son of Mario Bava who (it’s said) finished this film after Ricardo Freda walked off the set once recalled that the house destroyed by Caltiki at the end was actually a model of his dad's real home and the miniature furniture was contributed by Mario's father Eugenio. That explains the meticulous attention to detail in the miniature sets.

The model house and its interior are incredible. Better than what we were seeing in the Godzilla movies of the era.

Caltiki - The Immortal Monster was published as a photonovel in the magazine I Vostri Film in its July 1, 1962 issue.

I’d love to see that photonovel.

Caltiki, the Immortal Monster is an entertaining film. Though not a classic, it’s well worth watching. 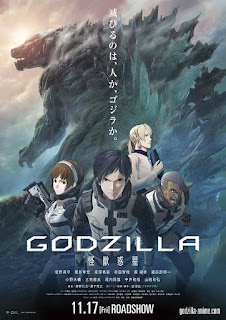 I was looking forward to seeing Godzilla: Planet of the Monsters [2017], an anime take on my favorite movie monster. My anticipation made my disappointment all the more keen. Here’s the IMDb summary of this film:

Years into the future and the human race has been defeated several times by the new ruling force of the planet: "kaijus". And the ruler of that force is Godzilla, The King of the Monsters. Humanity is in such defeat, plans to leave the planet have been made, and several people have been chosen to look at a new planet to see if it is inhabitable. Realizing it's not, though, the human race resorts to plan B: to defeat Godzilla and take back their planet.

The movie was directed by Hiroyuki Seshita and Kôbun Shizuno from the original story and screenplay by Gen Urobuchi. First conceived as an animated series, it became a trilogy of animated features in the wake of the success of the live-action Shin Godzilla. While the animation is stylish and occasionally interesting, this struck me as pretty much 89 minutes of depressing tedium.

Godzilla only appears in the movie to further crush the dream of the devastated humanity to return to its home world. It’s as if those making the film forgot who its star was. The dialogue falls flat at almost every turn. The voice acting is so-so at best.

Though some critics describe the movie as being equal parts about revenge and the regaining of hope in a hopeless situation, I see it as being about hopelessness with no redeeming character or plot development. I’m not looking forward to the next movie. I’ll watch it because it’s still going to be a Godzilla movie, but I’m not getting my expectations up. It’ll take a major course correction to turn me around on this trilogy.

If you’re a Godzilla fan who has to see every Godzilla movie, then you’ll need to see this one. If you’re a more casual fan, you can give it a pass. 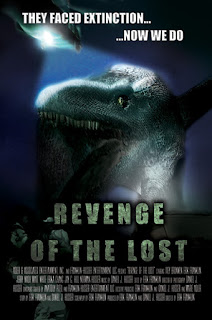 Revenge of the Lost [2017] was made on a very low budget, which was obvious from the start of this 100-minute mess-terpiece. I watched it via Amazon Prime because it was free and I was too tired to find something better. Oh, who am I kidding? If a cheesy monster movie crosses my line of sight, I watch it. It’s my blessing and curse. Here’s the IMDb summary:

A group of three survivors must make their way through the dinosaur apocalypse to a military base, the last safe place on earth. Once there, they come across a plot that's more terrifying than the dinosaurs themselves.

Directed by Erik Franklin, written by Franklin and Daniel Husser, this movie fell short of its Indiegogo fund-raising goal, but these spunky kids made it anyway. The three survivors are played by the director, Ivey Bronwen and Jerry Nash. Financial contributor Erika Chang played a military officer. If I contribute to movies, I may start asking for parts, too. I might need something to fall back on if the writing thing doesn’t pan out.

No clear explanation is given for why the dinosaurs are back or why they are made of terrible CGI. There’s a mad scientist involved in this somehow and a evil general. I’m guessing they had something to do with the dinos, but, as I said, the film didn’t make this clear.

One reviewer compared this to a zombie movie with dinosaurs taking the place of the zombie. Another mentioned Sid and Marty Kroft in his review. Both are fair comparisons, though the second is kind of insulting to the Krofts.

The plot just peters out by the end. There doesn’t seem to be any long-term solution to not getting eaten by dinosaurs. The liberals won’t pay for a wall to keep them coming into the United States and taking our jobs, raping our women, dealing our drugs and making fun of wacky orange toupees. I’m not even sure what the title means on account of it was an asteroid that killed the dinosaurs before we humans came along.

I’m an addict. That’s why I watched this movie. Don’t fall for the “free” come-on. The first one is always free. Take a few extra minutes as you scroll through Amazon Prime’s free films. You’ll find something better. You don’t want to end up like me.

That’s a wrap for today’s bloggy. Come back tomorrow and we’ll have fun with other stuff.