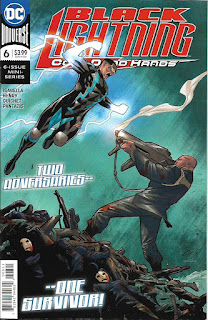 Black Lightning: Cold Dead Hands has concluded. While I’m waiting to see if I’ll be writing more Black Lightning comic books, I thought  I’d do a kind of sort of “exit interview” with my readers. For the foreseeable future, I won’t be doing any interviews, live chats or podcasts - maybe not even at conventions - so I wanted to give you a chance to ask me questions about the six-issue series. I put out the call for questions on Facebook.

We begin with this from Alex Harsani:

There was an Anissa in Black Lightning: Cold Dead Hands. She wasn’t Jefferson’s daughter but a student. What made you do this huge change of her character and do you plan to use her in possible second volume, maybe even as Thunder? Or maybe this is not even THE Anissa but only a random girl with the same name?

Black Lightning: Cold Dead Hands is a reboot of the character. Told I could do whatever I wanted for this series, I decided I wanted to do things with the character I’ve never done before. For example, this Jeff is much younger than previous versions and isn’t married. That ruled out him having a daughter.

However, I like the characters of Thunder and Lightning. So I made them Jeff’s cousins. I mentioned or showed that they have powers, but also made it clear they are not ready to become super-heroes at this time.

I do have plans for the young ladies if I get to write new stories of Black Lightning. Though my Anissa and Jennifer are younger than those on the TV series, I’m inspired by the magnificent portrayals of them by China Anne McClain and Nafessa Williams. 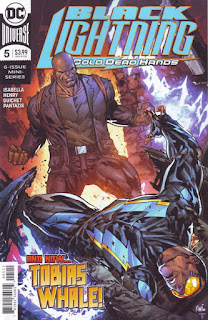 Next up are multiple questions from Brock Brisbane:

Has Bryan Hill contacted you regarding his interpretation of Black Lightning in his coming Detective Comics arc and presumed spin-off Outsiders series?

Has anyone mentioned reintroducing Jefferson’s daughters into the DCU, though neither Flash's Vibe or Supergirl's Martian Manhunter had any comic appearances?

No. But, as I answered above, in Black Lightning: Cold Dead Hands, Anissa and Jennifer are his cousins. At this time, I’ve no reason to believe Cold Dead Hands doesn’t represent the new continuity for my creation.

Have you outlined a subsequent mini series arc?

I have pitched an ongoing Black Lightning series, though it could be split into various mini-series if that’s what DC decided would work best with its publishing plans. 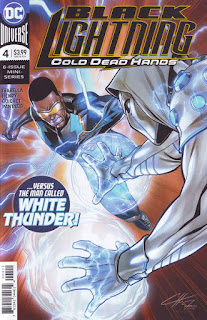 Our next batch of questions come from Adam Holmberg:

Do you have a single favorite issue? Why is it a favorite?

Every issue has at least some favorite things in it. Some days, I think issue #3 is the best because it emphasized so many important personal (for the characters) and social issues. The scene in that issue where we learn so many surprising things about Usagi is one of my favorites, possibly because it literally came out of nowhere. I was writing the page and - boom - all of a sudden I saw Usagi in a different light and rolled with it.

Overall, whenever I got the chance to show how smart Jefferson was, those were favorite moments for me. I’d been telling people that he was the smartest Black Lightning ever. Those scenes - when he lets the cops handle the drug dealer on the school football field, when he shows he’s as smart or smarter than Tobias Whale - those scenes are a large part of why I wanted to throw out the past continuity and do new things with the character.

How much input did you have into the selection of Clayton Henry as artist? What did he bring to the series you liked most, especially in contrast to Trevor von Eeden and Eddy Newell?

We considered a lot of artists, but I think it was Jim Chadwick who recruited Clayton. I was familiar with his work and thought he was a great choice. What he brought to the series was the ability to do both the action stuff and the human drama stuff. Only an artist who could do both would have been right for this series.

It’s unfair to compare Trevor with Eddy or Clayton. He was a young and experienced kid. He had enthusiasm and talent, which is why we got such good work out of him. But, back then, he wasn’t really in the same league as Eddy or Clayton. Today, well, he was the first artist I suggested for Cold Dead Hands. That didn’t happen because there was bad blood between DC and him. Maybe someday he and I will get a chance to work together again.

Eddy was and remains one of my favorite artists. We were in sync on what my 1990s series should be. Eddy’s art played a big part in my stories. We didn’t discuss plots or anything. He got full scripts. But he defined the feel and the look of the Brick City. That gave me a clear direction for my writing.

Why bring Jefferson back to Cleveland?

The series I did with Eddy was actually set in Cleveland. The Brick City is an actual neighborhood in Cleveland. I spent a lot of time there when I was developing that 1990s series.

For Cold Dead Hands, since I was trying to do new things with Black Lightning, I decided to leave no doubts that the series was set in Cleveland. I figured the city that gave birth to Superman deserved a super-hero of its own. It added a certain realism to my stories. If I write more Black Lightning comic books, the city will plan an even larger role in the stories I tell. 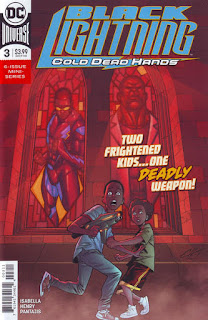 My long-time pal Chris Gumprich hadn’t finished reading the entire six issues of Black Lightning: Cold Dead Hands, but it didn’t stop him from asking a question that a great many interviews have sort of danced around:

Considering how bad things got between you and DC, did you ever think you would be writing Black Lightning again?

I had accepted for years that it would take a change of management at DC Comics for me to ever have a shot at writing Black Lightning again. I knew that, for this reunion to ever happen, DC would have to have new management that loved my creation and respected me and my work. Given a long litany of wrongs against both Black Lightning and myself, I had no realistic expectation of that happening. But I wasn’t going to slink away into the night. I was going to demand what was due me, figuring that, even if I didn’t get that, my story could be a learning moment for other creators and possibly prevent them from getting screwed over.

Imagine my delight when the old management went away - I will not speculate on how that welcome turn of events came about - and the new management saw the potential in Black Lightning, accepted that I had been treated badly for decades, and set about making things as right as they could. Whatever happens going forward, I will be eternally grateful to Geoff Johns for reaching out to me and also for the opportunities and respect I’ve received from other members of the DC Comics community. 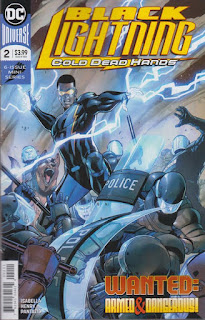 Stacie Taylor e-mailed me this:

Peter Gambi is my favorite character on the TV show. Did you create Gambi to be like Alfred Pennyworth or is that just how he seems on the show? Did you know there are Role Players like me who role play characters like Jefferson Pierce/Black Lightning? We come up with our own plots, storylines and such. I'm playing both Jefferson Pierce/Black Lightning and Peter Gambi in games on Facebook.
When I created Jefferson Pierce and his world, I knew he would need someone savvy about crime to help him. In the original 1970s comic books, Gambi was the brother of Paul Gambi, the tailor who made the costumes for the Flash’s rogues gallery. I knew Jenette Kahn, who was the publisher at the time, wanted more connections between the various DC super-hero titles. My Peter Gambi was a former criminal who was trying to make amends for his bad choices and the misery he caused by those choices. He knew a lot about criminal enterprises and was a pretty good engineer/inventor to boot.

Salim Akil and his terrific team of writers expanded on what I had laid down for Gambi. The basics of my original creation are still evident, but they modernized the character and his relationships while also bringing in social issues that date back to experiments our government performed on black soldiers. I like the television Gambi better than I like my version.

I didn’t know there were Black Lightning role players, but, having read your comments, this doesn’t surprise me. These are wonderful characters. I could see where fans could have fun playing them in such games. It’s not something that interests me...and, for legal reasons, I don’t want to hear about the plots and such...but I am delighted fans are enjoying my creations in this way.

There are more Black Lightning questions waiting for me to answer them, but this is all for today. If you have additional Cold Dead Hands questions, feel free to e-mail them to me.

Once the Black Lightning TV series concludes its first season this coming Tuesday, you can start sending me questions on the series as well. The best way to send them is, again, by e-mail.

The bloggy thing will be off for a day or two. Tomorrow morning, my Sainted Wife Barb is having surgery. We’ve been assured that it’s routine surgery, but she’ll be recovering at Casa Isabella for 4-6 weeks under my loving care. I’m amazed at how well I rock the sexy nurse look. My butt and legs look fabulous!

Now that I’ve put an image in your heads that you will struggle to un-see, I’ll bid you adieu. I’ll be back soon.