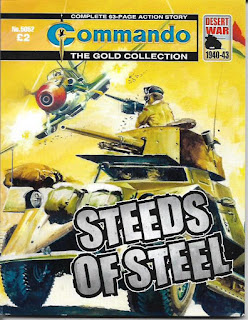 I’m a happy subscriber to Commando, the British comic book devoted to war stories. Commando has been published continuously since July 1961 in a distinctive 7 by 5-2/3 inch, 68 page format. Four issues are published every month with two of them being original stories and the other two being reprints. The black-and-white tales remind me of the non-character back-up stories from the DC Comics war mags of the 1960s. Figuring two panels per page, that’s the equivalent of a 21-page story. That length allows for a greater attention to accuracy and more substantial character development. I enjoy these comics and have somethings thought about writing a story utilizing this format and pacing. Add that to the bucket list.

From time to time, I’m going to write about Commando in this bloggy thing of mine. Most likely several issues at a time.

Commando #5052 features “Steeds of Steel” by C.G. Walker with art by Bielsa. The cover is by Sanfeliz. The upper-right corner of the cover designates this as a “Desert War 1940-1943" story and, under the logo, there’s a further “The Gold Collection” designation. As near as I can figure “The Gold Collection” means a story is on its third printing while “The Silver Collection” means a story is being reprinted for the first time. This issue’s story previously ran in 1969 and 1977.

In India before the Second World War, fighting Afghan tribesman, a British lancer commander foolishly sends his troops into a combat sure to prove disastrous. Wounded by a sniper, the commander does not heed the advice of the officer who will actually lead the men. The officer is killed. The commander claims the dead officer acted on his own, thereby saving his career. Come World War II, the sons of the commander and the officer are assigned to a unit under the command of the commander. Though British soldiers are usually seen in the best light in Commando, the stories have their fair share of cowards, traitors and ruthless officers. 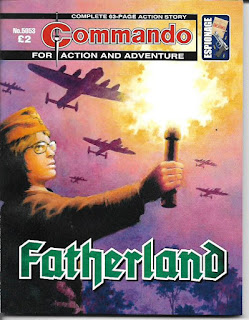 Commando #5053 has “Fatherland,” a terrific original story by Lain McLaughlin with art by Rodriguez and Morhain. The cover painting is by Ian Kennedy. The upper-right corner of the cover designates this as an “Espionage” story.

Lisa Fischer and her mother flee Germany to escape the tightening grip of the Nazis and the cruelty of Lisa’s S.S. father. But they are forced to flee without Lisa’s brother. She grows up in England and joins the British army. Her brother Kurt joins the German army and serves under the command of his father. When Lisa takes on an undercover mission in France, she is reunited with her father and brother. This is an intense story with great characters and tense situation. I’d rank it as one of the best Commando tales I’ve read to date. 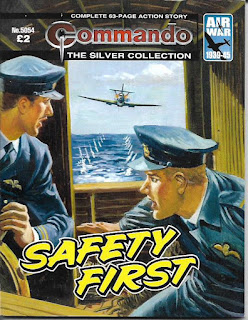 Two R.A.F. fighter pilots Johnny Lees and Nat Rankin have different approaches to combat. Johnny is a relative rookie determined to do whatever he has to do. Nat is more of a “survive at all costs” kind of soldier. Their uneasy friendship is at the heart of this tale. 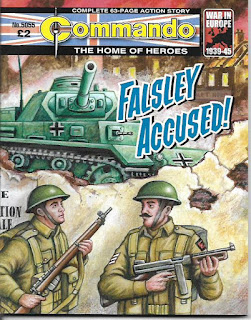 Commando #5055 has the new “Falsely Accused,” is written and drawn by Jaume Forns with cover art by David Alexander. It’s designated “War in Europe 1939-45.”

The protagonist of this story is Private Bill Wilson, who’s falsely accused of looting. His sergeant finds him outside this deserted, devastated French village with a bag of treasure. The sergeant does not believe Wilson recovered the treasure from two dead looters and was trying to figure out who to hand it in to. Wilson is a likeable guy trying to do the right thing in the middle of the war. I took to him right away. A fine story. 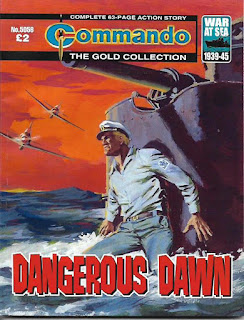 Petty Officer Gordon Laker is facing a “Dangerous Dawn” in Commando #5056. Written by Lister and drawn by Gonzalez, this “War at Sea 1939-1945" tale first appeared in 1969 and was previously reprinted  in 1977. The cover is by Lopez Espi.

Laker is the only survivor of the H.M. Submarine Scorpio. Forced to surrender to a Japanese patrol boat, the plucky sailor soon unites his fellow prisoners, leads an escape and launches commando attacks against his former captors. It’s a fine story with a surprise twist at the end. 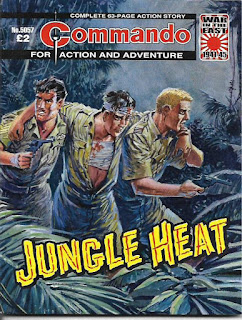 We’re still in the Pacific theater for Commando #5057. The all-new “Jungle Heat” is set in the jungles of Japanese occupied Papua New Guinea. The story was written by Colin Wilson and drawn by Manuel Benet, who also did the cover. This is designated as a “War in the East 1941-1945" tale.

The heroes of this issue are squabbling R.A.A.F. [Royal Australian Air Force] pilots Dave Keating and Roger Smith. Conflict like this is not uncommon in Commando stories. Crashed in the jungle, the duo must work together to survive the dangers of the region. The danger includes a brutal Japanese officer determined to kill them. It’s a solid story and, while its portrayal of the brutal Japanese officer is unrelenting, it treats another Japanese character with respect. 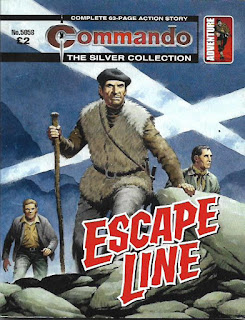 Commando #5058 reprinted “Escape Line” from 1993. Designated as an “Adventure” tale, the story was written by Alan Hemus with interior art by Garijo and cover by Ian Kennedy.

Weary from the Spanish Civil War, correspondent Marcel Dupont must escape the country for his native France. With him are war-weary soldiers. Their only path is through the rugged Pyrenees, but their guide doesn’t appear to be trustworthy and they end up in a prison camp. A few years later, as the Nazis move across the land, Dupont tries another escape. But there’s something frighteningly familiar about their guide this time around. Some plot twists make this tale one of the better Commando adventures. 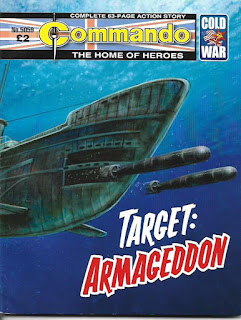 Commando #5059 has “Target: Armageddon,” a new Cold War adventure by Lain McLaughlin with art by the Rodriguez-Morhain team. Janek Matysiak is the cover artist. This story starts in Germany at the end of Hitler’s regime and continues to the Cuban missile crisis of 1962. McLaughlin has a knack for shaking up the Commando formulas and writing outstanding stories.

For U-Boat Kriegsmarine Kapitan Heinrich Kessler, Germany’s defeat and surrender betrayed his belief in the supremacy of his nation. He escapes to South America with his submarine, his crew and Nazi fortune. Decades later, with the submarine still very operational, Kessler schemes to use his secret silent killer to push the United States and Russia. Like “Fatherland,” this is one of the very best stories to have run in Commando since I started subscribing to the title a few years back.