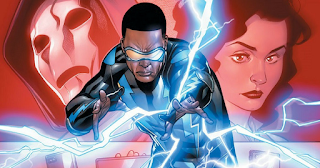 Black Lightning: Cold Dead Hands has completed its six-issue run. In this kind of  exit interview, I’m answering questions  that have been sent to me by the readers.

First up is Peter Crighton. He asks:

Do you believe that the big comic-book companies are treating their writers and artists better today than in decades past?

Confining my answer to the Big Two (DC and Marvel), I believe that, overall, those publishers are treating creators better today than in the previous history of the comics industry. They don’t always get it right, but I think the folks in charge honestly want to do better by the creators. They don’t always know how.

The history of the comics history is a sad history of the creators being screwed over by publishers, editors and even fellow creators. Fixing that is going to be a long and slow learning curve. Of late, I try to avoid getting angry and, instead, poke, mock and attempt to tell the companies when they fail and how they can do better in the future.

I believe this is smart business. You’ll get better work out of the creators when they feel properly compensated and respected. Sadly, this may not be the case for all creators. But the goal should be to treat all creators better.

Given your druthers, would you prefer to write the earlier, pre- New 52 version of Black Lightning or the current redo?

That’s easy. The current version, which shouldn’t surprise anyone as I was the guy who developed it. My aim was to create a modern version of the Black Lightning/Jefferson Pierce that still had the same core values as my earlier versions...and to use that as a way of doing things I had never done with the earlier versions. I know a few readers object to my recasting his daughters as his cousins. Since my new version has never been married, that was a necessary change. If I get to write more Black Lightning comics, you will see the cousins grow and mature into characters as laudable as their TV counterparts.

This reminds me of when a comics artist got on my case about Black Lightning’s name. He wanted to change it to Bolt. Which I thought then and still think now is a really dull name compared to the name Jefferson has used so proudly for four decades.

I thought Cold Dead Hands was one of the most nuanced and balanced examination of gun violence in fiction while still being a great superhero story.  Did you do a lot of research into gun violence or talk with police about dealing with guns?

Thanks for the kind words, Jason.

I have been researching gun violence for years and also researching police violence towards minorities. When I wrote my second Black Lightning series in 1995, I was given amazing access to the police of that time. The majority of them were good cops who truly wanted to serve the people. I learned a lot from them.

This time around, I had no such access. Over the past two decades, many police officers - including good cops - have bought into the destructive “them versus us” mentality. Good cops do not hold bad cops accountable...and that’s something that needs to change if we are have any chance of improving the current situation.

The usual alt.right morons have tried to frame Cold Dead Hands as an “anti-cop” comic and gone to ridiculous lengths to make a case for that. They have failed miserably because the series is exactly what I intended it to be in this regard.

There are good cops and there are bad cops. There are cops trying to figure out who they are. And, contributing to the violence on all sides, soulless gun manufactures use the National Rifle Association as a means to ratchet up both civilian and police fear and thus increase their blood-stained profits.

Naresh Sundaraman gets the last question:

If DC Comics asks you to write another Black Lightning series, who will be the villain?

That’s not a question I can answer simply. If DC wants me to write more Black Lightning series, my choice of villain would depend on the format. Is it another mini-series? Is it an ongoing series? Is it a one-off graphic novel?

In my pitch for an ongoing series, I have story lines involving existing villains, re-imagined villains and brand-new villains. I hope I get the chance to use them all.

Posted by Tony Isabella at 5:33 PM