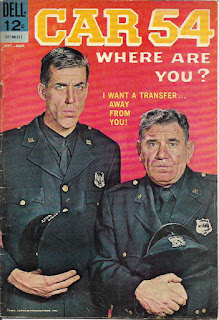 Fantastic Four Annual #1 hit the newsstands in July, 1963. It was that extraordinary issue that inspired me to write comic books as my career. In honor of that pivotal moment in my life, I’m collecting, reading and writing about every one of the 136 issues released in that month. My first twenty columns in this series are available in July 1963: A Pivotal Month in the Comic-Book Life of Tony Isabella Volume One [Pulp Hero Press; $17.95]. The trade paperback contains revised versions of the columns that appeared in this bloggy thing as well additional material giving readers a glimpse into the world of 1963. My quest continues...

Car 54, Where Are You? #7 [September-November 1963] was yet another licensed comic book published by Dell. The most successful licenses - Bugs Bunny and friends, Mickey Mouse and friends, Little Lulu, Lone Ranger, Tarzan and others - remained with Western Publishing, Dell’s former partner, who continued publishing them under the Gold Key label.

Car 54, Where Are You? was a sitcom on NBC from 1961 to 1963. Its lead characters were  New York Police Department officers Gunther Toody [played by Joe E. Ross] and Francis Muldoon [Fred Gwynne]. They were assigned Patrol Car 54 in the fictional 53rd precinct of the Bronx. I remember watching the show, albeit not faithfully. I have a vague memory my father enjoyed it, which is probably why it was on our family’s black-and-white TV set. Obviously, the cover is a publicity photo from the show with Gwynne on the left and Ross on the right. 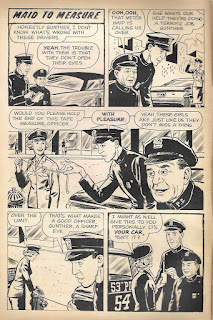 The inside front cover of this issue presents “Maid to Measure,” a single page gag strip in which a meter maid asks Muldoon and Toody for assistance. Impressed by the woman’s attention to detail, they are quick to help...to their chagrined regret. The Grand Comics Database credits the pencils and inks on this page to the prolific Tony Tallarico. The writer has not yet been identified.

Tallarico’s work was inconsistent from job to job, which, perhaps, is the result of his being so prolific. But his art for this issue is solid throughout. Good storytelling, nice action and excellent likenesses of Ross and Gwynne. 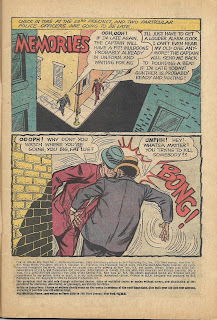 “Memories” (27 pages) by writer Don Segall with art by Tallarico finds partners Toody and Muldoon demanding transfers after a spat about who made who late for work. Segall wrote for both radio and TV while also writing comic books for Dell. He wrote stories for a few other publishers as well, but the vast majority of comics work was for Dell.

Toody’s wife and Muldoon’s friends try to bring the partners back together by reminding them of the good times they’ve had together. Those good times include Toody going on an exercise binge; Toody’s wife playing matchmaker for Muldoon; the boys trying to get out of cleaning Toody’s living room; and their nervous investigation of a haunted house that reveals a crooked card game. That’s the extent of their policing in these memories: they bust a crooked card game. But, you know, it’s a fun story with lively art and funny writing. It makes me want to read the other issues in the series.

“The Jealous Cat” was a one-page prose story, author unknown. The story tells of pampered cat Jupiter whose life is upended when his family gets a puppy: Vincent. Before long, Vincent is getting more of the table scraps. When Vincent gets bigger, he gets the really nice space under the steps. Jupiter is unhappy. He spends most of his time in the backyard, coming into the house only for food and warmth. Until the day when Jupiter is surrounded by invading dogs and Vincent comes to his rescue. The two have finally bonded and walk into the house side-by-side. 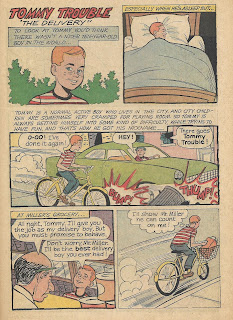 Tommy Trouble is the back-up this issue. As has been mentioned in previous chapters, to qualify for second-class postage, Dell has to run a feature not related to the title feature. Tommy is “a normal, active boy who lives in the city and city children are sometimes very cramped for playing room. So Tommy is always getting himself into some thing of difficulty while trying to have fun. And that’s how he got his nickname.”

“The Delivery” (4 pages) was by Segall with art by Tallarico. We’re shown an example of his trouble - his bicycle hits a garbage can, knocking into a passing automobile - and then get down to the main story.

Hired by Miller’s grocery to make deliveries, Tommy does amazingly well at the job. Given a key to Mrs. Korp’s apartment to deliver groceries while she’s out, he unknowingly interrupts a burglar in the middle of robbing the place. The robber hides in the closet and that’s when the “trouble” starts.

Tommy tosses a ball for Tiger, Mrs. Korp’s dog. The ball goes into the closet, but Tommy thinks it rolled under the bureau. He moves the bureau and traps the burglar in the closet.

Mrs. Korp comes home and hears the burglar trying to get out. She tells Tommy to keep the bureau in place while she calls the police. Grocer Miller shows up as the cops are taking the burglar away and praises Tommy as the best delivery boy he ever had. Tommy gets the last line:

But I sure never expected to deliver a burglar!!

This seems to have been Tommy Trouble’s only appearance. But, like the rest of this issue, it was fun. Car 54, Where Are You? is most definitely an underrated title of the era.

The inside back cover is “147 Famous Automobiles” ad we’ve talked about previously. The back cover is Wallace Brown trying to recruit salespeople for its Christmas cards.

Batman’s back in the next installment of “July 1963,” which will be posted soon. In the meantime, please come back tomorrow for more cool bloggy thing stuff.

Posted by Tony Isabella at 3:29 PM