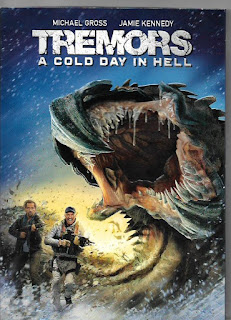 Today’s cadre of cinema reviews starts with the latest entry in one of my all-time favorite franchisees...

Tremors: A Cold Day in Hell (2018) is the sixth film in the Tremors series. It stars Michael Gross as the cantankerous survivalist Burt Gummer and Jamie Kennedy as Travis Welker, the son Gummer learned about in the previous Tremors movie.

Don Michael Paul is the director. Among his previous credits as a director - he’s also an actor and a writer - are 2015's Tremors 5: Bloodlines and 2012's Lake Placid: The Final Chapter. Mild spoiler. That Lake Placid movie? It wasn’t the final chapter.

John Whelpley is the writer. This is his third Tremors script. He did Tremors 5: Bloodlines and 2001's Tremors 3: Back to Perfection. He’s also written for many TV series, including Andromeda, Earth: Final Conflict and others.

The sequel finds Burt Gummer and his son Travis at a remote research station, where they must go up against Graboids that have been converted into living weapons.

I don’t want to give away too much of the movie, but there are some things I feel I should mention. First off, the Graboids have *not* been converted into living weapons. Yes, there’s a sleazy federal agent (DARPA) that wants to do that after he learns these creatures exist, but the Graboids and Ass-Blasters seen in this movie act as Nature intended them to act. Damn you, Nature.

When the movie opens, Burt is in Perfection taking care of Walter Chang’s old store, facing serious tax trouble and being foreclosed on by the government. This situation comes up later in the movie.

Though it’s stated the film is taking place in the Canadian arctic tundra, that’s only believable in the opening sequence. Most of the movie was filmed in Cape Town, South Africa. Global warming is said to be why the hills and valleys don’t have much in the way of snow. What’s cool about the setting is that the valley where the remote research station is based has the same basic geographical structure as Perfection and, like the first Tremors movie, that limits the options for the humans being hunted.

There’s another terrific link to the first Tremors movie, but I’ll let that one come as a surprise for my fellow Graboid afficinados. It’s a good one.

One more spoiler-ish note. Besides facing foreclosure and Graboids, Burt is dying from an infection he caught when he was swallowed by a Graboid in a previous movie. It’s an intriguing element and adds to the suspense of this new movie.

Tremors: A Cold Day in Hell has everything you could want from this latest sequel. It’s got Burt Gummer. It’s got the somewhat strained relationship between him and his son. It’s got some cool surprises. It’s got fine performances from some of the supporting characters. It’s got a satisfying ending. I can’t wait for the next one. 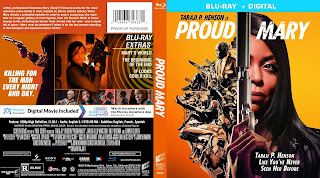 Proud Mary (2018) puts me in mind of the black action movies of the 1970s. It might lack the then-freshness of those films, but it’s a better movie in virtually all other regards.

The movie is directed by Babak Najafi, who directed 2016's London Has Fallen. The screenplay is by John Stuart Newman, Christian Swegal and Steve Antin from a story by Newman and Swegal. The great Neal McDonough [Arrow, Justified, Legends of Tomorrow] appears in a minor role.

The glorious Taraji P. Henson is the title protagonist. A hitwoman for a crime family headed by Benny [Danny Glover], she was raised and trained by them. The film opens with her killing an accountant  who owed money to Benny. Her target’s son, playing video games in another room, is unaware of what she’s done. He never sees her and she doesn’t kill him.

A few years later, Mary tracks down the boy, who is a runner for a drug-dealing mobster protected by the Russian mafia. To save the boy, she shoots the mobster. She leaves no witnesses and takes the boy in. But she has inflamed the existing tensions between Benny’s family and the Russians into a full-fledged war.

Henson is terrific as the conflicted hitwoman. Jahi Di'Allo Winston is very good as the hard-before-his-time Danny. In a sense, Proud Mary brings the issue of modern-day slavery into this story. Both Glover and the protected mobster claim ownership of Mary and Danny at various points during the movie. Kayne West might consider that Mary and Danny’s choice, but, after all, Kayne is sort of an idiot, his dragon energy notwithstanding.

The fight scenes are good, but not particularly outstanding. At the end of the movie’s 89-minute running time, what we got was a film occasionally elevated by Henson’s performance. It was reasonably entertaining with a satisfying conclusion. It’s not a movie I would watch more than once, but I have no regrets kicking back with a big bowl of popcorn and watching it once. 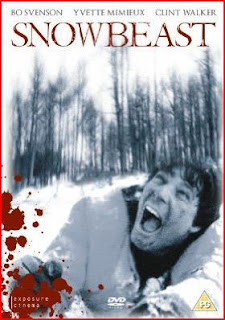 A Colorado ski resort is besieged by a sub-human beast that commits brutal murders on the slopes.

This is another movie inspired by the success of Jaws. Svenson is a down-on-his-luck champion skier who takes a job as an instructor at his friend’s Colorado ski resort. He’s accompanied by his wife [Mimieux] who has some unresolved feelings for the friend [Logan]. Walker is the town sheriff who, ultimately, joins the three of them to hunt down the snowbeast.

Sylvia Sidney has a nice turn as the matriarch of the family that owns the resort. Which has seen much better days. Which needs for its ski festival to be a smash hit. So, naturally, she isn’t quick to accept the reports of the snowbeast and cancel the festival. If she ever decided to go into politics, she could run for mayor of Amity.

People die. Not surprising. The snowbeast reveals itself in a very public manner, slaughtering a woman sitting in a car. My memory of this scene from the original TV airing is very different from when I watched the film on DVD.

My memory is that when the car woman’s daughter runs to the car to open the door and check on her mother, blood flows from the door in figurative buckets. No such scene is on the DVD, but it might well have been in the original. From IMDb:

The scene where the snow beast attacks the town hall during the snow queen ceremony was written in to replace a previously scripted and filmed attack scene that was deemed too violent to be aired on television.
Is the missing scene the one I remember? Did it somehow get on TV when Snowbeast first aired or during some later showing that used the original footage? Your guess is as good as mine.

There were a lot of Jaws imitators in the movie theaters and on TV. Snowbeast is neither one of the best nor one of the worst. But it has some appropriately scary and suspenseful moments. It had decent acting. At the end of the movie, I felt sufficiently entertained by its 86 minutes that I am comfortable recommending it to my readers who love cheesy monster movies as much as I do.

That’s all for today, my friends. I’ll be back tomorrow with some other stuff. See you then.

Posted by Tony Isabella at 8:57 AM