CAPTAIN AMERICA: THE STRENGTH OF THE SUMO 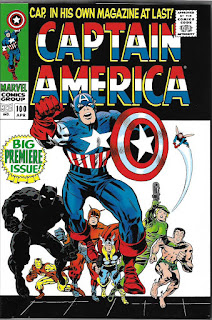 Captain America Omnibus Vol. 1 [Marvel; $125] has been part of my morning routine for a couple weeks now. I read one story every day, glorious reminders of how exciting it was to be a Marvel Comics fan in the mid-1960s.

The Captain America solo strip, which launched in Tales of Suspense #59 [December, 1964], was different from most super-hero strips in that Cap didn’t have supporting characters. It was mostly all him, the most human of the Marvel super-heroes, battling criminals, evil organizations and heartbreaking memories of having his late World War II sidekick Bucky Barnes. The only comparatively lonely hero was Dr. Strange over in Strange Tales and even that master of the mystic arts had Wong.

Some readers complained about the lack of a supporting cast in the letters pages of Tales of Suspense, clearly favoring Iron Man with its Tony Stark/Pepper Potts/Happy Hogan romantic triangle. I loved both strips, but something about that breakneck Jack Kirby action art put me firmly on Team Cap.

Speaking of the letter columns, there are familiar names among the fans representative in those pages. Names like Margaret Gemignani, Pete Von Sholly, George Haganauer, Derrill Rothermich, Don McGregor and more. Like many Marvel fans, I made friends through the letters columns and fanzines of those bygone days.

Tales of Suspense #61's “The Strength of the Sumo” is a story that caught my attention when I reread it. Captain America goes to Viet Nam to rescue an American helicopter pilot taken prisoner by the Communist forces. The pilot’s brother rescued Cap during World War II and Cap is looking to repay that debt.

Many comics tales featuring Communist villains are problematic when viewed through modern sensibilities. When Cap defeats a couple of muscular soldiers, their major bemoans that Cap “has caused him to lose face” before sending Cap off to face the general holding the pilot prisoner.

The general turns out to be a giant sumo wrestler, who enters the store behind a parade of masked dancers that would have done Cecil B. Demille proud. I didn’t get that reference in 1964 and I doubt any readers under the age of 50 would get it today.

The fight between Cap and the Sumo is outlandish and enormous fun. Cap maneuvers his opponent into dropping a statue on himself, but since we’re just panels away from the end of this story, all we see are big chunks of rocks behind the escaping Avenger. Cap and the rescued pilot steal the general’s small private jet, which the Sumo could not possibly have fit into, and fly to safety.

What makes this story special? The helicopter pilot is a black man. Sure, because of the coloring of that time, he does look more like a grey man, but this is still a pretty neat thing and an example of how Marvel was starting to make their comics more diverse.

What makes this story even more special? The pilot’s race is never mentioned. Not once. That he’s black is not key to the adventure. He just is. Good on Stan and Jack.

Looking at the story through my 2021 eyes, I do see some timeline problems. Given that it takes place two decades after World War II, the pilot would have more likely been the son of the man who saved Captain America.

If I ever wrote Captain America again, it would be tempting to use the helicopter pilot in a story. But I wouldn’t. The Viet Nam war was half a century ago and bringing it into a modern-day tale would be jarring. I don’t want to remind readers that, if you go by the dates these stories were originally published, Cap has been out of the ice block three times longer than he was in it. That is a detail better glossed over.

Two months after “The Strength of the Sumo” was published, Captain America’s series went in a new direction. Starting with a retelling of his origin, World War II would be the setting for his stories. Some tales would be retellings of stories originally published in the 1940a. Sidekick Bucky Barnes would be in most of these wartime adventures. Amusingly, issue #68's “The Sentinel and the Spy!” had Cap charged with recovering a stolen secret super-weapon, a secret weapon that seemingly every one, including rank-and-file American soldiers, knew about. Loose lips...

The World War II tales would run through issue #71. Jack Kirby did the layouts for the three-part finale with finishes by Dick Ayers,  George Tuska. Joe Sinnott inked Tuska’s second outing and, as you would expect, the combination looked great.

When Cap’s series switched back to the then-modern era, it was with a multi-issue story that excited me as a youngster. Indeed, had I been allowed to write more than a handful issues of Captain America in the 1970s, I would have done a sequel to it.

Alas, you’ll have to wait to learn about my planned contribution to the “Sleepers Saga” until I do another bloggy thing on the wonders to be found in Captain America Omnibus #1. I’ll try to make that happen before the end of the month. In the meantime, stay safe and sane. I’ll be back soon with more stuff.