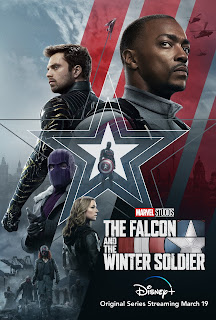 Perhaps there’s some minuscule bit of truth to the charge I watch too much TV and too many movies. On the other hand, these are not just part of my life but of the lives of a majority of my readers.Finding a balance between watching and writing is always difficult. However, by writing about what I watch, I combine these interests and claim my cable bill and my Bluray/DVD purchases as legitimate business expenses. Right, IRS?

Marvel Studios just keeps knocking it out of the park. My son Eddie and I have been getting together every Friday to watch The Falcon and The Winter Soldier, just as we did with WandaVision. The six-episode Falcon/Winter Soldier series is as amazing as WandaVision, albeit in a more down to earth manner. Five episodes in, we eagerly await the conclusion. I’ll be devoting a full blog to the series, but, for now, I want to talk about one aspect of it, an element I wish future Marvel productions would devote more time to.

Half the Earth’s population and heroes disappeared between the end of Avengers: Infinity War and the climatic epic battle in Avengers: Endgame. They disappeared for five years, a period that came to be known as the Blip. The planet, its nations and its people moved on from their incredible loss. The planet, its nations and its people were changed by that event and the welcome but challenging return of those thought gone forever.

Gosh darn it, I want to see stories of those five years and of the new world the missing people returned to. Such an incredible event needs to be chronicled. I would love to see Marvel Comics address these years and their aftermath in a new imprint featuring comics stories from the Marvel Cinematic Universe. Which, to me, is a no-brainer. The MCU is more relatable than the increasingly convoluted standard Marvel comics universe. I’d love to read those MCU tales. I’d love to write some of them.

I’ve been told such an imprint is something Marvel Comics isn’t at all interested in doing. That’s a shame. But, at least, we have a great many Marvel Studios projects to look forward to.

Loki is next up, making its Disney+ debut on June 11. The premise as reported on Wikipedia is:

After stealing the Tesseract during the events of Avengers: Endgame (2019), Loki is brought to the mysterious Time Variance Authority (TVA) organization and their Time-Keepers, and is forced to fix several timelines he broke, while traveling through time altering human history, ending up trapped in his own crime thriller.

With the terrific Tom Hiddleston reprising his role as Loki, this looks to be an exciting and wacky series. Like The Falcon and The Winter Soldier, there will be six episodes released one per week. Clear my Fridays. 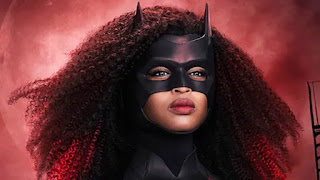 When I was ranking the DC/CW shows last season, Batwoman got third place after Black Lightning and Stargirl. It had a gritty feel not unlike Black Lightning and Gotham. The story of Kate Kane [played by Ruby Rose] was compelling. The fascist nature of the Crows was a nice commentary on police excess. The supporting cast was great. But that was last season.

Rose chose not to return to Batwoman for the second season. Which left the series without its lead, even though every since story line derived from Kate Kane. The logical path forward would have been to recast Kate Kane. Logic is hard to come by.

Ryan Wilder, innocent felon on parole living out of her van, became the new Batwoman when she recovered Kane’s gear from the wreckage of an airplane. Actress Javicia Leslie has done an amazing job in the role, but the plotting of the series has gone down in flames as hot as those in the plane wreckage.

The convoluted manner in which Batwoman has connected the Kate Kane storylines to Wilder is painful to view. Crazed sister Alice/Beth Kane [Rachel Skarsten] flays around the series like an angry bird. Existing characters do the same. Incredibly boring new characters  like Safiyah, Enigma and Angelique rose to prominence in desperate attempts to plug holes in the leaking dam that is Batwoman. And, as good as Leslie and returning players Meagan Tandy, Nicole Kang, Camrus Johnson and Dougray Scott are...along with Leslie, they are why I’m still watching the show...they can’t stop the flood.

The addition of Black Mask is a decent move. He’s been a dangerous force in the Batman comic books and has the potential to move the series beyond Kate Kane’s stories. Except...

...Kate Kane is still alive. Disfigured in the plane crash, given a new face and brainwashed into being the enemy of all she used to fight for, Kate is alive and will be played by Wallis Day, formerly quite good in the short-lived Krypton series on the Syfy channel.Wilder will continue as Batwoman for the foreseeable future.

Understand this, I love Leslie as Batwoman/Ryan Wilder. I like that a gay person of color from a challenging background is continuing that legacy, this from a guy who would much rather see characters of color and gay characters in original super-hero roles instead of becoming existing super-heroes. But there were all sorts of way to have Wilder become Batwoman without this new Kate Kane development. A disabled Kate could’ve become an inspiring character and another kind of role model in the series. Instead, we get cheesy melodrama. I’m officially on the fence re: Batwoman.

However, if Batwoman wants to get back in my good graces, and I’m assuming nothing is more important to them, they could always give radio talk show host Vesper Fairchild [Rachel Maddow] some actual screen time. Nothing major, just an occasional appearance. I think that would be great fun.

The response to these “watching” columns have been very good, so I plan to continue them. I’ll be back soon with more stuff.